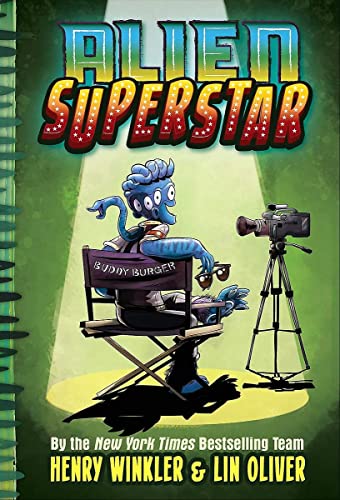 “With an ever-ready wit and tons of delightful backstage antics, Alien Superstar is one series that’s ready to blast off.”

The duo behind the Hank Zipzer series has launched a new middle-grade series with Alien Superstar, drawing on their shared experiences in the world of television and the enduring popularity of aliens.

As the story starts, Citizen Short Nose and his engineer grandmother are fleeing their planet’s repressive government for Earth, home of the movies and TV shows they love. They long to breathe free and express their creativity. In the ruckus, Grandma Wrinkle is captured, but her grandson escapes, eventually touching down in the heart of Universal Studios.

In a nice twist, the tourists don’t question the alien and spaceship in their midst. Instead, they rush in to take selfies, mobbing Citizen Short Nose, whom they assume is another Universal character. Luckily, a costumed Frankenstein happens by and saves him from the crowd, taking Citizen Short Nose to the employee break room. Making up a human name on the spot, the alien dubs himself Buddy Cheeseburger, or Buddy C. Burger, for short.

Assuming he’s one of them, the other employees tell Buddy of an audition for Oddball Academy, which is casting an alien character. Buddy aces the audition, winning the guest spot on the show. However, all is not peaches and cream on the way to his dream. From the start, Earth presents a tough adjustment for Buddy—the sunlight is too bright, his suction cups stick to the floor, and Earth food doesn’t nourish him properly.

Most challenging of all, if he’s to become an actor, he can’t just pretend to be wearing an alien costume all the time. Fortunately, Grandma Wrinkle had designed him an amulet that will transform Buddy’s appearance into that of Zane Tracy, a teen star from the ’50s. After a few failed experiments, it works; Buddy looks just like a teen human.

At the table read, he hits it off with most of the cast, particularly Cassidy, the female star. However, Tyler, the show’s resident teen idol, loathes Buddy at first sight. That feeling only intensifies when Buddy turns out to be a viral hit at the live show taping. Before you know it, he’s offered a contract as a permanent cast member. Cassidy’s pushy stage mother Delores steps in to volunteer as Buddy’s guardian/manager and whisks him off to live at their house. (Since Buddy has told everyone his archeologist parents are on a dig in the Sahara.)

The two authors have plenty of fun with their fish-out-of-water concept, milking Buddy’s point of view for some clever digs at human behavior, as in his observation of someone with a loud shirt: “On my planet, you could go to prison for wearing something like that.” Or in this encounter with a tourist:

Ethan Nicolle’s charming black and white illustrations flesh out the book, fleshing out key scenes and complementing the madcap tone. It makes for a winning package. With an ever-ready wit and tons of delightful backstage antics, Alien Superstar is one series that’s ready to blast off.