Alias Anna: A True Story of Outwitting the Nazis 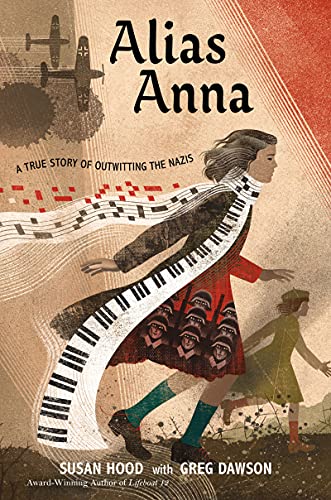 “a gripping story . . . one that really happened.”

Susan Hood partners with Greg Dawson to tell the true story of Dawson’s mother, Zhanna, who survived the Nazi genocide in the Ukraine. It’s a gripping story precisely because it’s one that really happened. Zhanna ducks out of a death march when her father bribes a Nazi guard with his last treasure, a gold watch. Somehow Zhanna’s younger sister, Frina, also escapes, and the two girls find each other and use their musical talent to hide in plain sight for the rest of the war.

The story fills a gap in Holocaust literature by describing the massive burial pits where thousands of Jews were shot and buried in the Ukraine. As Hood explains:

rolled into the Soviet Union

march them to a ravine,

The family was on one these marches, all the Jews from their town herded toward a big ditch where they would be shot. During these last desperate moments, Zhanna’s father gave his daughter his heavy winter coat and whispered, “I don’t care what you do. Just live.”

“Zhanna leapt out of line

silent as a hare diving into his hole.

It had taken just a second—

a blink of an eye,

a turn of a head,

a beat of a breath,

a pound of a pulse.”

The history of how the story came to be is also compelling, born out of a teenage granddaughter writing to her grandmother to ask what her life was like at that same age. Zhanna hadn’t told her son what she was finally ready to tell this granddaughter, as he writes in the afterword. Hood incorporates this into the end of the book, but it’s not necessary as part of the main story. In fact it detracts from the narrative there, feeling like an ending pasted onto an ending that was pasted onto an ending. Instead there is no real satisfying ending to a story that richly deserves one. The war is over, there’s a refugee camp, and somehow the girls are in America. A sequence is given with little emotional or dramatic weight.

This points to bigger narrative issues in the book. The history is incredibly powerful, but the writing is not. By making this a novel in verse, somehow the reader is kept at a distance from Zhanna and her experiences. Perhaps this is intentional—the Holocaust would be too horrific to get close to. But the result is that there is little to no character development. Zhanna at least feels more real than her sister Frina, who never really comes to life. But all the peripheral characters, from the parents to the fellow members of their musical troupe, feel like labels rather than individuals. For all the dramatic events that happen, there is no real narrative tension, no dramatic build. The only thing that really feels alive are the moments of musical descriptions, which Hood does beautifully.

Other novels in verse still manage to create vivid characters and worlds. Jacqueline Woodson’s Brown Girl Dreaming and Darlene Beck Jacobson’s books, Wheels of Change and Wishes, Dares, and How to Stand Up to a Bully are all strong exemplars of this format. Alias Anna pales next to these books. Perhaps that was intentional, to make a painful story easier for a young audience. It’s more important than ever to get these stories out there and Alias Anna is a valiant effort. It could have been so much more.