Alexander the Great: His Life and His Mysterious Death 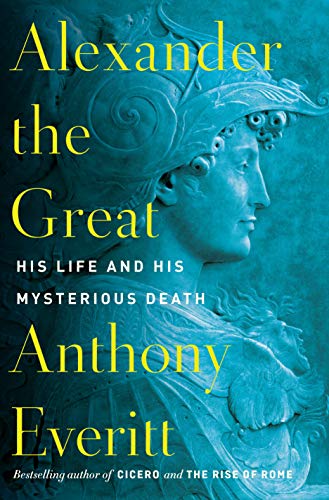 "Anthony Everitt's understanding of the world of Alexander the Great does better at solving the mystery of the man than in solving his death."

Alexander the Great in legend, literature, and movies somehow becomes lost in the epic story of his life, "an adventure story" that "took him to every corner of the known world." Anthony Everitt, author of several books on the late ancient world, in Alexander the Great touches on the importance of the environment to the people and the history of the moment.

The author argues that authors of earlier "accounts reflect the concerns of their own age as much as they do of his." The author confesses that this new work also "reflects our own twenty-first-century hopes and fears" but Everitt's "intention is to understand" Alexander's world.

Alexander the Great also explores the great conqueror's death, still "an unexplained mystery." One account gives Alexander's death "a verdict of murder, and the other of a complicated natural death." The author gives a detailed account of the subject's last days.

Knowing what created Alexander comes the closest to explaining what the man became. Early on to survive, he had to "understand the realities of life and death" in the "viper's nest" politics of his Macedonia where rulers came to power, "appointed by acclamation" (i.e. came and went by murder).

Of the five predecessors to Alexander as king, three succumbed to homicide and two to in defeat in battle. He never forgot a slight even if his revenge came as a harmless joke years later. Alexander had an "impulsive nature," "surprising lack of interest in sex," and became "a greedy consumer of data.”

The famed Aristotle taught the young man "poetry, music, and rhetoric" and likely natural history, politics, and much more. Alexander saw the great Greek philosopher "as a surrogate father."

"Alexander resented and resisted direct orders, although he could be persuaded by an appeal to reason." He developed a special pathos "a need to achieve the impossible," which he did with ingenuity. "His almost suicidal bravery in the field," however, guaranteed "he was doomed to die young."

To the end of Alexander's life, he remained "an immature and rash youth" who barely survived battle wounds, disease, and mental health issues. At Gaugamela, his greatest battle and among chariots, elephants, horses, hoplites, and (tens of thousands) soldiers, Alexander and King of Kings Darius came close enough that they hurled spears at each other.

Phillip of Macedonia left his son Alexander a powerful experienced army financed by Macedonia's gold and silver. As in modern wars, money meant everything. Philip died as he prepared to conquer part of the Persian Empire while he could still afford to do so. Alexander gave away all that he had to pay for the first month of his Asia campaign.

Phillip also decided not to conquer the neighboring Greek city-states. He instead forced them into the League of Corinth, a peaceful coalition that would support his planned Asian conquests. Everitt stresses how often Alexander set aside vengeance for cooperation.

The great war against Persia came out of its past domination of Macedonia. Alexander "digested" a book by Xenophon, a Greek mercenary in the Persian civil war that told Alexander what he needed to know to conquer the vast Persian Empire.

Everitt repeats others who described the "sprawling Persian Empire" of the modern Near East and Middle East as a "desert punctuated by oasis" with "well-rare red plains" and "arid wastes." It proved a "Gordian knot" to untangle on land and sea by the sword and by diplomacy.

The Persians began as nomads, but no matter how wealthy and powerful they became, they never lost the trappings of their roaming lifestyle. Ironically, they ruled the spectacular city of Babylon with its palaces, walls, and "one of the world's earliest museums." The author insists that the city did have the legendary Hanging Gardens.

Alexander planned to expand the power of Babylon and its Euphrates River with "commercially viable townships along the Arabian coast" and a conquest of Italy and the North African coast, ironically including both of the later great rivals Carthage and Rome in one giant peaceful expanding economic entity.

Alexander conquered, reformed, and unified the world as he knew it. His army brought with it "architects, botanists, astronomers, mathematicians, ethnographers, and zoologists" to learn from and assimilate all they encountered. Wherever his army went, Alexander ordered huge cultural art festivals for his army.

This conqueror likely became the first commander "to establish a public relations department." In his historic campaigns in Asia, he proved himself a grand master in open battle, logistics, siege warfare, and naval battles.

Anthony Everitt's understanding of the world of Alexander the Great does better at solving the mystery of the man than in solving his death. The prose does well as education and entertainment although the author acts informal at times, such as some of his terminology and in the chapter headings. Alexander the Great has a bibliographic essay and annotation.