The Aleutians 1942–43: Struggle for the North Pacific (Campaign) 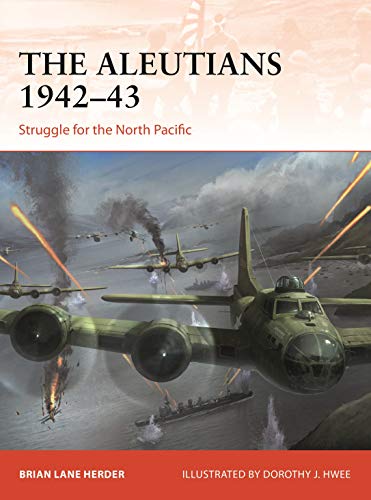 "A page-turner illustrated with maps, paintings, and photographs, The Aleutians takes the reader to the action there in 1942 and 1943."

Osprey Publishing continues its series of concise, well-written, professionally designed, beautifully illustrated books on America in the Pacific World War. The Aleutians 1942–43 with Brian Herder as author and Dorothy Hwee as illustrator continues the series. It includes expertly done maps and a bibliography.

The Aleutians form an island chain of "volcanic ash quagmire" where the United States comes closest to Japan and Russia. In 1940, enormous Alaska as a whole "imported ninety percent of its food" but with "no overland connections" and "electricity was rare."

Because of its strategic location, the Aleutians became "American territory potentially open to invasion." The Japanese attack on Pearl Harbor on December 7, 1942, resulted in transforming Alaska "into a war zone" with small garrisons on individual Aleutian Islands and obsolete planes and ships from the resource strapped United States military.

On June 3–4, the Japanese and American militaries fought the indecisive battle of Dutch Harbor having to confront the severe weather conditions as much as each other. The decisive American victory at Midway at that time far overshadowed the subsequent Japanese occupation of Attu and Kiska islands, however.

The Japanese "would excavate impressive underground facilities" "with only hand tools available." Its Aleutian garrisons, however, "lacked the high engineering skills and proper heavy equipment" to build the air bases needed to seriously threaten Alaska.

American's military and civilian effort to build up Alaska to defend the huge territory and retake the Aleutians proved much larger. Terrible mistakes, however, cost lives and lost opportunities but the Americans prevailed with courage, incompetence by the Japanese leadership, luck, and "extravagantly disproportionate resources."

For 11 months, the two sides locked in "an endless string of tiny, often individual life-and-death skirmishes played across the vast loneliness of the Pacific." The fighting involved bombers, convoys, seaplanes, submarines, ships, blockade, distance, and the severe climate.

Each side "began tapping their mutual Aleutian sideshow for South Pacific reinforcements." Bombing and shelling left an "undamaged Japanese camp." That changed when the American bomber line closed in on Kiska by occupying nearby Atka and Amchitka islands.

This book wastes no space but it gives thorough summaries of the commanders, Japanese and joint American-Canadian, as well as asserts and strategy. A page-turner illustrated with maps, paintings, and photographs, The Aleutians takes the reader to the action there in 1942 and 1943.

The chapter on the Richmond and "History's last daylight fleet action" proves particularly gripping, as does the account of the battle for Attu. The latter "would prove the United States' second costliest Pacific island battle after Iwo Jima.