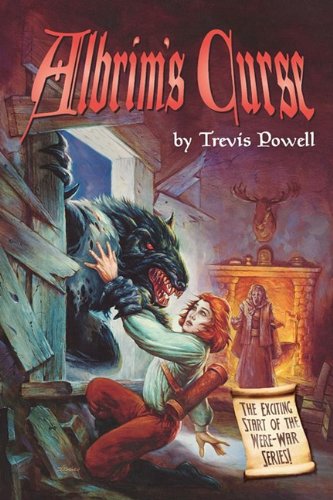 Blackwyrm Publications, May 2009 Twilight’s Jacob Black isn’t the only teenage werewolf with issues. Meet Albrim—a young archer from Cobble, a rustic settlement on the edge of the wilderness. As a member of the peasant militia, he is enlisted to hunt a pack of large wolves wreaking havoc in a neighboring territory. With the overlord’s son, Sir Garen, in command, the village is left virtually undefended.

When the men are away, the wolves come out to play. Thankfully the remaining residents have Gran. With her curt answers and feisty resourcefulness, she directs the counterattack. Yet Gran soon realizes the one behind the offensive is not an ordinary wolf. It is a werewolf.

Upon receiving word of the attack, the militia returns home. The werewolf quickly disposes of them. Moving in for the kill, the werewolf dismembers Albrim’s arm. Just in time, Gran’s silver-coated frying pan and Sir Garen’s sword put an end to the werewolf. But only Gran knows the werewolf’s bite has infected Albrim with the curse.

To prevent an execution by a fearful mob, Gran fakes Albrim’s death. In the midst of a fever brought on by his transformation, Albrim is transported to the secluded dwelling of a mysterious hermit.

This solitary man nurses Albrim back to health and chains him to a rock during the full moon. During these periods, Albrim’s humanity is overtaken by the blood lust of the werewolves. With the help of an expert dwarf, a magic band is fastened to Albrim’s arm to prevent his werewolf characteristics from surfacing. The dwarf also fits Albrim with a rudimentary mechanical hand. With practice, Albrim regains his archery prowess in time to help the hermit against an imminent attack.

Due to a battle injury to his neck, the hermit is unable to speak. Albrim names him Mute. The two develop their own language as they work together to hunt down the remaining werewolves. When their plans go awry, the unlikely partners end up caught in their own trap.

The author, Trevis Powell, is a former member of the U. S. Army Reserves. He masterfully creates a fantasy world reminiscent of the 1980s cult movie, Willow. The relationship between the changed boy and the disfigured man provides a human touch to this creature-filled romp.

At times, scenes run long. For example, several chapters are devoted to Albrim running from a pack of wolves. Descriptions, such as the construction of Mute’s trap, are overly technical in nature. The text size is small and the line spacing is tight.

Overall, this is a must-have for lovers of werewolf mythology.