Albert Einstein's Theory of Relativity: Words That Changed the World 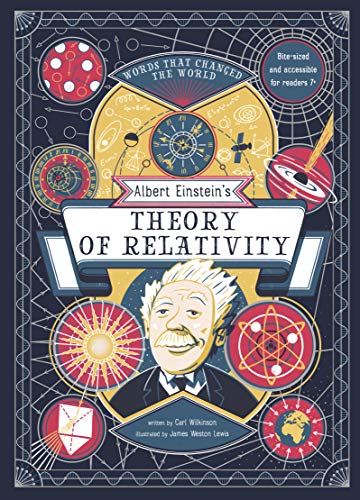 “accessible in an engaging way, sure to inspire a generation of young scientists.”

Carl Wilkinson accomplishes something amazing in Albert Einstein’s Theory of Relativity. He makes complex physics comprehensible, while James Weston Lewis’ illustrations make the meaning clear and attractive. This is a beautiful book and one young scientists will spend hours reading and rereading.  Wilkinson provides the historical context for Einstein’s discoveries, from Aristotle to Galileo to Newton, while showcasing the unique imaginative brilliance Einstein brought to the tricky questions of What are space, time, and light?

Through well-chosen quotes, Wilkinson makes clear how important original thinking is in advancing science: “Imagination is more important than knowledge for knowledge is limited whereas imagination encircles the world.—Einstein.” In concise language, Wilkinson describes how Einstein built on or reacted to the science of the day to create something completely new, the theory of special relativity. In general, the author does a good job of bringing in other physicists and their contributions to the newly developing field of quantum physics.

Unfortunately, there’s one place where this otherwise brilliant book falls short. Describing Einstein’s most famous equation, e=mc squared, Wilkinson writes: “Before Einstein’s theory of relativity, there were two important laws in physics: 1. The law of the conservation of energy . . . 2. The law of the conservation of mass . .  . These two laws were thought of as separate, but Einstein realized that the mass of something is just a measure of its energy content.” So far, so good.

But then he goes on: “It wasn’t until 1932 that Einstein’s equation was first shown to be correct. Physicists John Cockcroft and Ernest Walton produced the world’s first nuclear reaction at the Cavendish Laboratory in England.” This is where Wilkinson makes his error, and it’s a big one, though it doesn’t directly involve Einstein. The first experiment describing nuclear fission was conducted by Otto Hahn in Berlin, but he didn’t understand the strange results as the nucleus splitting. That was understood and described by Lise Meitner, his Jewish partner who had fled to Sweden because of the many anti-Jewish laws in Germany. The incredible realization that the atom could be split, something Einstein himself had thought impossible, was reported by Niels Bohr and Enrico Fermi at the international physics conference that happened to take place soon afterward. The news electrified the scientists there who rushed to their labs to replicate the results.

Meitner and her physicist nephew, Otto Robert Frisch, understood the process through using Einstein’s famous equation. Einstein himself wrote, “I believed it was only theoretically possible . . . It was discovered by Hahn in Berlin, but he himself misinterpreted what he discovered. It was Lise Meitner who provided the correct interpretation.” If Einstein could give Meitner the credit for this ground-breaking discovery, one would hope Wilkinson would as well. It’s bad enough that the Nobel Prize for Nuclear Fission was given only to Otto Hahn, ignoring the woman who had done the actual work.

That’s one nit to pick in an otherwise thoroughly admirable book. Wilkinson and Lewis both handle complicated concepts and make them accessible in an engaging way, sure to inspire a generation of young scientists. It would be nice if they could have acknowledged that women have done some of the important work described here, so girls can also feel welcome in the scientific endeavor.