The Collected Letters of Alan Watts 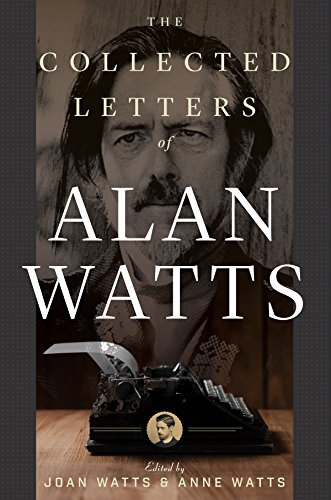 The very human side of Alan Watts, the East-meets-West scholar of the 1950s and libertine philosopher of the 1960s, comes alive in this wide-ranging collection of letters compiled by his two eldest daughters.

Watts, one of the most distinctive voices of the spiritual counterculture of the post World War II-era, was born in a prosperous London suburb in 1915 and died in Marin County, California, in 1973.

His lifelong effort to explain some of the more ineffable concepts underlying Buddhist thought began in the 1930s with the publication of his first book, The Spirit of Zen, at the young age of 22.

Later in that decade, Watts emigrated to the United States where, along with writer Aldous Huxley and Anglo-Irish mystic Gerald Heard, he established his reputation as one of the leading “British metaphysical expatriates.”

Watts’ speaking career began with informal gatherings in his New York apartment in 1939, where he discussed “aspects of Oriental philosophy” like “what Buddhists call ‘the heresy of separateness.’” In a newsletter that year, he wrote, “We have to recognize that self-consciousness and rationality are devices making it appear that we live our lives, whereas in fact nature lives them under this disguise.”

During the Second World War, Watts decided to explore his Christian roots by entering a seminary in Illinois, getting ordained as an Episcopal priest, and accepting a call to serve as a college chaplain.

In a January 3, 1951, letter to the noted Protestant philosopher Reinhold Niebuhr, Watts sought to correct the critique that Eastern mysticism’s  focus on “the void” made it a philosophy of negation.

“The reduction of all differentiated forms to the one or to the void is not the final word of either Buddhism, Taoism, or even the Vedanta,” he wrote. “Negative language is used to negate, not the real world, but the adequacy of all verbal symbols for the understanding of reality.”

“We must know God as we know the tree, not by defining it verbally or conceptually . . . but by immediate perception. Thus the ‘mystery’ of life is not seen as a problem to be solved but a reality to be experienced.”

A section of book titled The Priesthood Years: 1944–50, includes another letter of theological sparing with a conservative Anglican scholar who questioned some of Watts’ unorthodox ideas.

Christian mysticism, Watts wrote in this 1947 letter, “sought to rise above the flesh to God, forgetting that God has come down into the flesh.”

It was Watts’ soon-to-be-notorious celebration of fleshy pursuits that would lead to the discovery of the fact that he and his wife were living in an open marriage with another couple, a scandal that caused him to leave the priesthood in 1950 and head out to Northern California, where Watts began earning his reputation as a free-wheeling guru with little interest in monogamy or monotheism.

“My life would be much, much poorer were it not for certain particular women with whom I have most happily committed adultery,” he wrote in his autobiography, In My Own Way. “Our sexual communion was the natural culmination of our admiration for one another as people.”

In the italicized commentary that punctuate and enliven this hefty volume, daughters Joan and Anne Watts write about the difficulties they faced dealing with their fathers’ various wives and mistresses.

“In his defense, I have to say that I saw firsthand that there were women, young and old, that pretty much laid themselves at his feet,” writes Joan. “Like a bowl of chocolate truffles, it is hard to say no to ‘just one.’ And, of course, there was his aversion to Judeo-Christian mores regarding sex outside marriage or regarding sex in general.”

In the late 1950s and early 1960s, Watts’ experimentation with psychedelic drugs made him one of the earliest and most articulate commentators on a generation’s budding efforts to find spiritual enlightenment through the wonders of modern chemistry.

In a December 12, 1960, letter to Timothy Leary, who was just beginning his psychedelic research at Harvard, Watts thanked Leary for turning him onto a synthetic version of psilocybin, the active ingredient in magic mushrooms.

Watts, who had already tried LSD, said the pharmaceutical psilocybin Leary provided served as a powerful reminder that “what is serious, classical, and terribly important is at root nothing but play.”

“Pain and suffering are very far-out forms of play, and there just isn’t anything at all to be afraid of,” he told Leary. “There isn’t any ego. The ego is a kind of flip, knowing that you know—like being afraid of being afraid. It’s a curlicue, an extra jazz to things, a sort of double take or reverberation, a dithering of consciousness which is the same as anxiety.”

It seems clear that another drug—alcohol—played a major role in Watts’ early death at age 58. Joan writes of her father buying a case of six 1.75-liter bottles of vodka on the way to one of his lectures, and guzzling from one of them before going on stage in the early 1970s.

Watts became furious when his children tried to get him to drink less, yelling at them, saying, “he would commit suicide any way he wanted and we were not to interfere.”

“He seemed hell-bent on complicating his life,” writes Joan. “How he had the energy as a highly demanded public persona to juggle women, write books, lecture, and travel around the world is unfathomable. Somehow, he did it, but toward the end, his orbit began to wobble. He burnt himself out. A tragic waste of a brilliant mind.”

One of the great paradoxes of the amazing life of Alan Watts was how he could so brilliantly explain the enlightened state of mind while living a less than enlightened life.

Anne Watts tells how Richard Alpert—the Harvard professor who worked with Leary and then went to India in the 1960s, returning as the spiritual teacher Ram Dass—summed up her father’s life in seven words:

Watts himself was aware of this dichotomy. In a letter in the 1960s to one of his lovers, the libertine philosopher said he did not seek have people “reverence me as the source of the insight.”

“For one of the things I am trying to do is to shatter the whole idea of the exemplary person, and of treating philosophy and life itself as something that is supposed to ‘work,’ to be good for us.”

Don Lattin worked as the religion writer at the San Francisco Chronicle for 20 years.