Al Jazeera and the Global Media Landscape: The South is Talking Back 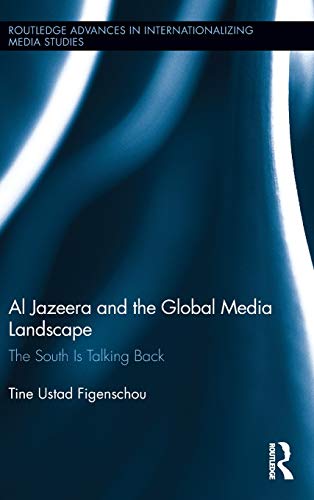 Mention the news company, Al Jazeera, and it’s likely the response will not be without a strong opinion of the Qatar-based news network. Americans are deeply suspicious of the Arab government-owned news network, particularly since the events of 911.

Regardless that Al Jazeera is aggressively trying to reach the U.S. audience and supply a balanced product, many Americans remain convinced that the news agency is biased against Israel.

Al Jazeera came to the main stage during the Arab protests in 2011 known as the “Arab Spring.” Broadcasting in English, the network was able to bring news of the unfolding events from regions no other network could access. This became the “Al Jazeera Moment” in recognition of its remarkable editorial coverage.

Al Jazeera and the Global Media Landscape makes a strong attempt to explain the complex strategies behind the controversial media company. It names its goals as a news company that strives to provide independent, impartial news and a voice of diversity from underreported regions. Little is known about the network’s journalistic awards such as Franklin D. Roosevelt Freedom Award, the DuPont Award, and the Peabody Award.

It is an ambitious effort. The network has 70 bureaus based around the world, including correspondents in West Jerusalem, Israel. Yet it is not differentiated by the majority of Americans from its Middle Eastern home base.  In an effort to dispel anti-Israeli bias, Al Jazeera maintains a bureau in Israel. Unfortunately, the reporting is constrained by their lack of access to the occupied territories by the Israeli military. To further complicate the job, “financial constraints limit their travel to, and presence within, the Palestinian territories, where the practical journalistic obstacles are many.”

The book is heavily weighted toward the Al Jazeera journalistic strategy that emphasizes its strong presence of on-the-ground teams of local reporters around the world. An example is given that in contrast to the British Broadcasting Corporation’s (BBC) coverage of Arab Spring, Al Jazeera gave a grass-roots perspective while the BBC gave a “white, male elite focus.”

It’s a costly endeavor and a “resource-intensive strategy,” Dr. Figenschou writes. Nonetheless, the author argues this is what sets it apart from every other news media company. Its key to beating the competition as a “broad global presence is a key strategy for maintaining the channel’s editorial distinctiveness.”

Yet being a global journalistic presence is not always popular, according to Wadah Khanfar, Al Jazeera’s Network Director General from 2003–11. “Each country has its own politics. Saudi Arabia has never allowed our bureau to operate in Saudi Arabia. Jordan was critical recently. Their official newspapers waged an official campaign against Al Jazeera, accusing us, again, of implementing a Zionist conspiracy to dismantle the Arab world. They had many complaints, one of them started with a prison protest that Al Jazeera covered.”

Recently Al Jazeera launched in the U.S. with Al Jazeera America (AJAM). Despite AJAM’s grab for big-name U.S. national network talent such as Soledad O’Brian as a special correspondent and John Seigenthaler as prime time news anchor, AJAM is floundering with just 13,000 viewers a day since its August 20, 2013 launch. Viewership is less than its failing predecessor, Al Gore’s Current TV with 31,000 daytime viewers, according to an article in the New York Post, Nov. 17, 2013.

The book does a good job highlighting how the channel wants to be distinguished from centrist and sanitized U.S. competitors.

To the author’s credit, while being a cheerleader for Al Jazeera, Dr. Figenschou criticizes the network for its lack of coverage of the low-skilled Asian migrant construction workers in Qatar and their poor living conditions.

Dr. Figenschou sights that these labor workers are regularly exploited by their Qatari sponsors, yet Al Jazeera has been noticeably quiet on the issue, simultaneously promoting itself as the “voice of the voiceless.”

News shapes how we see the world here and abroad. It’s important to take a hard look at the growth of international news networks, ambitious editorial agendas, and the expansion of more in-depth analysis of world events by non-U.S. centered outlets.

Al Jazeera and the Global Media Landscape does an excellent job of breaking down the pieces of this complex phenomenon of satellite news spanning the globe. It examines the motivation behind the network as well as the challenge of reaching a broad world audience.