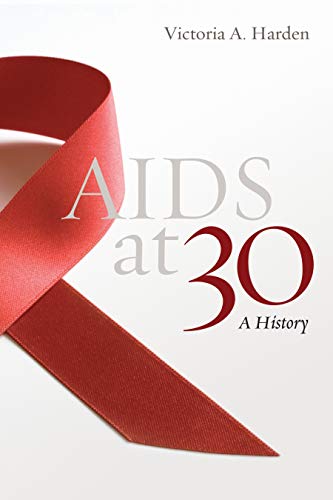 “As the AIDS epidemic enters its fourth decade, AIDS-related deaths have stabilized in most regions of the world, except for Eastern Europe and Central Asia. In North America and Western Europe, the death rate has actually declined. THE UNAIDS Global Report of 2010 gave a very ambitious goal of zero new infections for the fourth decade of the epidemic. Prevention is key, but societal attitudes, religious beliefs, and personal values can present serious obstacles in reaching this goal.”

Victoria Harden is eminently qualified to write a 30-year historical account of the AIDS epidemic. Since her arrival at the National Institutes of Health in 1984, she was closely involved with the intense activity around her involving this new disease.

Although Dr. Harden points out that AIDS at 30: A History is not a comprehensive account of AIDS history, it is a succinct and complete narration of all the principal events and players in the epidemic.

The book discusses the events leading to the discovery of AIDS and its treatments, the atmosphere of fear surrounding its early stages, and the great cultural and political controversies associated with the epidemic.

Since AIDS at 30 is oriented toward the layperson, a very helpful glossary of terms is included. An equally extensive set of notes provides more details on the topics for the interested reader.

The time from discovery to effective treatment of AIDS was very short, about 15 years—different from other epidemics. Recent advances in molecular biology and medical technology played an essential role.

The AIDS epidemic is particularly devastating since the causative virus (known as HIV) attacks the immune system. Contrary to other epidemics, an effective vaccine has never been developed. Vaccines are designed to stimulate the natural immunity of the body; however, since there are no survivors of end-stage AIDS, natural immunity does not develop.

The early years of the AIDS epidemic was associated with the gay community. Since homosexuality was largely a taboo subject, little press coverage was given. After recognition that the disease could be transmitted by blood, many people were beset by irrational fears.

The federal government finally took steps to overcome the problem with the Surgeon General’s Report in 1986, and with the “Understanding AIDS” report of 1988, which was mailed to all households in the U.S.

Dr. Harden provides an engaging account of the discovery of the AIDS virus, its life cycle, and the drugs that were developed to counteract it. Aware of her lay reader, she discusses the basic workings of the immune system and how the AIDS virus infects cells.

Two groups were major players in the discovery of the AIDS virus: the Laboratory of Tumor Cell Biology of the National Cancer Institute and the Pasteur Institute. Due to the prestige of first discovery, as well as patent rights to an assay for the AIDS virus, a lot of political infighting took place.

Scientists at the Pasteur Institute received the Nobel Prize based on first discovery of the virus, although Robert Gallo’s group at the NCI did extensive work in elaborating the HIV virus as the cause of AIDS. Dr. Gallo became the subject of virulent attacks from his critics. Dr. Harden provides a clear, objective accounting of these events.

Dr. Harden adeptly weaves the story of AIDS drug development and the politics surrounding it. The first effective AIDS drug, AZT, was co-developed by the NIH and Burroughs Wellcome—although the drug company controlled the patent and pricing of the drug. AZT proved not to be effective long-term because the HIV virus developed resistance to the drug.

The discovery and marketing of protease inhibitors greatly improved therapy. When these drugs are used in combination with AZT, known as “cocktails,” the virus is held in check, and the patient can lead a normal life; however, these treatments require lifetime use.

Due to previous disasters related to drug use, the FDA was empowered with the responsibility to require drug companies to submit data showing that their drugs were safe and effective before marketing. Unfortunately, the testing program can take years, and for AIDS patients facing death, patients were desperate to take any promising experimental drug.

Dr. Harden documents the rise of AIDS activists and the role of the media in bringing public and political awareness to the AIDS tragedy. The FDA permitted release of promising drugs prior to completion of their usual rigorous review process.

The third decade of the AIDS epidemic finally saw the disease placed on the international agenda. Dr. Harden focused on the work of the United Nations Joint Programme on AIDS (UNAIDS). Issues that had to be addressed include: accessibility of HIV drugs to patients in undeveloped countries, funding the global fight against AIDS, and the direction of future research on AIDS.

Although effective AIDS treatments were available in the form of drug cocktails, the cost was totally out of reach for the poor of Africa. Arrangements had to be made with drug companies to lower drug prices for African patients, while preventing diversion of the drugs to developed countries.

As the AIDS epidemic enters its fourth decade, AIDS-related deaths have stabilized in most regions of the world, except for Eastern Europe and Central Asia. In North America and Western Europe, the death rate has actually declined.

THE UNAIDS Global Report of 2010 gave a very ambitious goal of zero new infections for the fourth decade of the epidemic. Prevention is key, but societal attitudes, religious beliefs, and personal values can present serious obstacles in reaching this goal.