The Agitators: Three Friends Who Fought for Abolition and Women's Rights 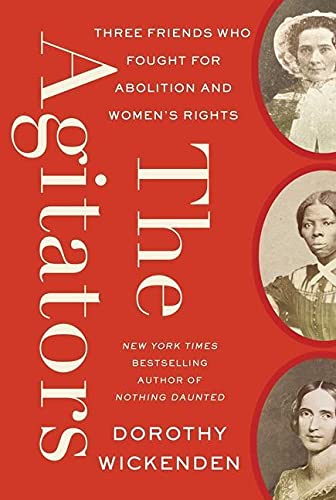 “Wickenden does a brilliant job of weaving all the complicated threads together, telling a compelling story that we thought we knew well. History at its best: personal, powerful, and inspiring.”

Through the lives of three exceptional women, Dorothy Wickenden lays out the story of how fighting for women’s rights and the end of slavery became entwined causes in the 19th century. Martha Coffin Wright is the first woman she introduces, summing up her character as “she rarely encountered an institution she didn’t question, and although convention dictated most of the circumstances of her life, she liked breaking rules, and then explaining why she had no choice.” Raised a Quaker in Philadelphia, Martha found a community that already had a strong anti-slavery tradition. But she took things further than most, turning her home into a stop on the underground railroad, helping refugees, and participating in conventions calling for equality for women and an end to slavery.

The second woman is Frances Seward, the wife of New York governor Henry Seward (later Secretary of State under President Lincoln). Although always careful not to interfere with Seward’s political prospects, Frances did everything she could to advance women’s rights and the abolition of slavery. Recognizing that education should start young, she sent both of her sons to the Auburn Female Seminary, shaping young feminists in her own home.

Henry was a vocal critic of slavery himself, defending escaped enslaved people and free Blacks. Henry, in fact, presented one of the first uses of the insanity defense in the case of a murder committed by a young Black man, William Freeman, and went on to defend violators of the Fugitive Slave Act.

Harriet Tubman is the third woman, and her courage and determination are well portrayed. Her close relationship with Frances and Martha is the core of the book, showing how people from widely different backgrounds can come together and build on each of their strengths to create a combined force for real change.

Women’s rights activists used abolition speakers—William Lloyd Garrison and Frederick Douglass—to bring legitimacy to their cause. In turn, these women worked actively for abolition: being part of the underground railroad; starting schools for freed Blacks and escapees, getting them paying jobs so they could start new, independent lives; even selling them land cheaply so they could farm and build homes.

The book outlines many fascinating and crucial events, with much information packed into each paragraph. Throughout all the details, Wickenden keeps the focus on how attitudes toward slavery and women’s rights changed, how the two causes worked together for human rights at a time when that notion didn’t exist. She’s especially good at showing how strong, determined individuals can make big changes, how lone voices can find others to join into a powerful chorus.

There are a lot of names to keep straight but the story is powerfully clear—the horrors of slavery demanded everyone to respond. Some things are so wrong, it was argued then and can still be argued now, that standing by and doing nothing becomes complicity. With the publication of Harriet Beecher Stowe’s Uncle Tom’s Cabin, nobody could claim ignorance of the ugliness of slavery. The bestselling book did more than create awareness, it mobilized people to demand change from their governments. Readers now may be surprised that one book could make such a difference. It’s heartening to see the power of words to stir empathy at such an important time.

Wickenden does a brilliant job of weaving all the complicated threads together, telling a compelling story that we thought we knew well. This is history at its best: personal, powerful, and inspiring.