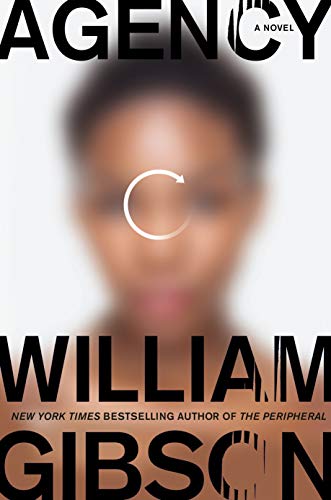 “As for all really important worldmaking, the key to the power of Agency is not the imaginative twists of computers, software, or politics, but what people do for the sake of those they care about, and those who care about them. Even if the one caring is clearly a piece of software.”

For suspense readers, “agency” is shorthand for the CIA. But Agency in William Gibson’s speculative creation goes far beyond an intense, suspenseful thriller—it’s the intro to a new world, one in which crime and criminals, whether government-hired or corporate or “mob,” test the boundaries of how to shape the future. And maybe even the past.

The book begins simply enough: A software tester, better known these days as a beta tester, takes on an assignment for a San Francisco-area company, after a couple of years of unemployment. Verity Jane (Jane’s her last name) believes the parent company is “in gaming.”

But when Verity powers up the augmented reality (AR) set she’s taken home to test, it—or she, Eunice—clearly has capacities well beyond the expected. In fact, Verity’s first notable action is to ditch the AR gear and retreat to the bathroom, to make a private call to the CEO who’d hired her. “‘Is this for real? . . . Just tell me there’s not someone somewhere doing Eunice, for my benefit?’”

The moment that Verity starts digging in to test Eunice’s capabilities for herself, readers leap from the West Coast to somewhere in Britain. The second chapter of the book actually springs farther than that in terms of worldmaking, though: Detective Inspector Ainsley Lowbeer, striding along beside a freelance investigator she’s pulling back onto a case, is reflecting on the terminology for chunks of the past, called “stubs,” that people in her system are able to initiate. Except they’re more like branches, pieces of continuity forking away from the recorded past, to expose potential futures where government and society may vary radically.

Inevitably, these two strands of narrative meet, and swiftly. Government in the future insists on seeking out Eunice’s origins and intent, although it will be a long time in the lives of all the protagonists before the British manipulations begin to make sense and have effects, positive or negative. At least at first, it seems Verity Jane is in a kinder, better world than DI Lowbeer and her hired hand, Nethercott. Eunice, who identifies as African American, claims to be eight hours old. In turn, Verity’s 33.

‘It just means time to get your shit together.’

There was a looseness to this beyond [Verity’s] experience of chatbots, but a wariness as well.”

Soon Verity and Eunice move beyond talking about movies and apps, and Verity’s reputation as an “app whisperer” turns out to hide a deep and intelligent loneliness that Eunice mitigates. Can we say that Verity matters to Eunice, just because Eunice makes sure Verity gets the breakfast she needs, or finds important items already packed when it’s time to run? Without Verity—and there’s clearly no frivolousness in Gibson’s choice of this name—can Eunice achieve what she/it intends to? How much will the British interfere, and if there’s really a risk of nuclear war behind all of this, will Eunice’s existence affect that risk? Can the British team affect it?

As for all really important worldmaking, the key to the power of Agency is not the imaginative twists of computers, software, or politics, but what people do for the sake of those they care about, and those who care about them. Even if the one caring is clearly a piece of software.

And that title, Agency? Here’s the first definition from one dictionary: “the capacity, condition, or state of acting or of exerting power.” Much like Gibson’s world-shaping debut novel Neuromancer (1984), Agency points with creative and incisive interest toward the choices that portend. We’ll be fortunate if the human journey of non-artificial reality gives us artificial intelligence as significant and generous as Eunice—with worldmaking agency to follow.