The Age of Persuasion: How Marketing Ate Our Culture 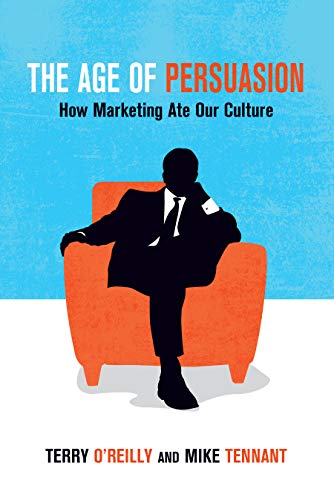 From: Your Book Reviewer

I read your book.

I thought I was going to learn something about the state of marketing, a rather complex skill that requires a number of disciplines to create a product, price, promote, and distribute it—the classic definition according to the dean of marketing thought, Philip Kotler.

But, gentlemen, you work for advertising agencies. Advertising is one of the subsets of marketing promotion—along with public relations, direct and indirect sales, and other functions. You even explain this fact in the book’s very first pages. Yet from that point on you blithely express time after time that advertising = marketing.

It isn’t. Strike one.

Strike two: I have no idea whom you intended this book for.

Also, it’s great that you have the graphic design of “Mad Men”—the best (and only) television drama ever about an advertising agency—on your cover. And it’s super-great that you underscore what any successful ad campaign must have: a “Big Idea.”

But I can’t find the Big Idea in Persuasion. If there is one, it must be lurking in the dense underbrush of roughly three-hundred anecdotes about ads and ad campaigns. Yes, I’m glad you’ve given me some history and you’re up to date on how the Internet has completely changed the game. I had hoped for a smidgen of the future when it comes to media and marketing but . . . aw, what the hey.

Don’t get me wrong. Your prose is as lively and sweet as meringue. After all, you are ad guys; if you can’t write good copy, who can?

Yet there’s not a whiff of serious analysis to be had in The Age of Persuasion. How could there be? You love what you do. Like loopy teenagers on a first date, you’ve given me a jumble of disorganized, almost random patter about everything you’ve learned— endearing, but not enlightening.

At best, you reveal that consumers are getting smarter and smarter, and that advertising must become more authentic.

For now, I think I'll stick with the classics: Ogilvy on Advertising, Packard’s The Hidden Persuaders.

I was glad to learn that on average I get exposed to more than 600 advertisements a day. Maybe that explains why I’m so tired and ticked off.

However, despite all the cute paragraphs devoted to campaigns past and present, you forgot the old joke that grizzled veterans of the industry tell—you know, the one where, if they could, television networks would broadcast live, naked executions.

Your book inspired me to add a further prediction—that the victim’s demise would be brought to us by Tylenol.