Age of Iron: On Conservative Nationalism 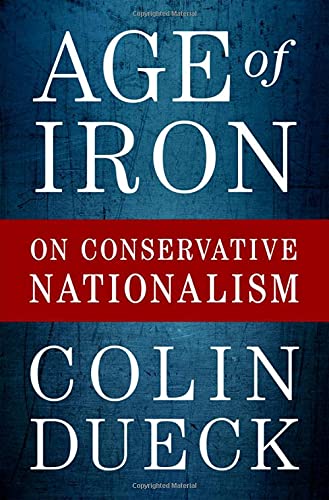 “[An] insightful and penetrating study of the history of conservative nationalism in the United States.”

“[T]he golden age of liberal internationalism ended some time ago,” writes Colin Dueck in this insightful and penetrating study of the history of conservative nationalism in the United States. “This is the age of iron.”

Dueck, a professor at George Mason University and visiting fellow at the American Enterprise Institute, takes his title from the ancient Greek poet Hesoid, a contemporary of Homer, who “suggested that over time humanity had developed through a series of historic eras, beginning with a prehistoric golden age, then passing through silver, bronze, and heroic eras.” Hesoid described his own era as the age of iron, an age where “scoundrels will be honored . . . and shame will vanish.”

Dueck notes that Hesoid suggested that the age of iron will be “a blend of the good and the bad,” and urged Greek citizens to “[r]emember that neighbors come first.”

Hesoid’s worldview runs counter to that of liberal internationalists who see history as developing in a linear, progressive trajectory until, as Francis Fukuyama wrote after the end of the Cold War, humans reach the “end of history” when the idea of liberal democracy is triumphant.

The notion of an enduring progressive world order, Dueck notes, has its roots in the United States in the presidency of Woodrow Wilson. Wilson envisioned a utopian world order where nation-states would put aside their selfish interests and ambitions and live in harmony with their neighbors under the wise guidance of a League of Nations. That notion was little more than a fantasy inspired by the horrors of the First World War.

Dueck shows that no previous U.S. president, with the exception of Thomas Jefferson, thought about the world that way. Instead, all previous U.S. presidents (including Jefferson) pursued policies to promote and protect American interests. All 19th century U.S. presidents saw the wisdom of George Washington’s prudent advice in the Farewell Address and John Quincy Adams’ counsel that America is the “well-wisher to the freedom and independence of all” but “the champion and vindicator only of her own.”

Dueck’s main point is that conservative nationalism—including the version currently being implemented by President Trump—has a long and distinguished history in American foreign policy thought and practice. Critics of President Trump’s approach to the world who contend that his administration has embarked on a dangerous and unprecedented foreign policy are, in Dueck’s view, taking a shortsighted view of U.S. history.

Dueck defines conservative nationalism as “a democratically oriented and civic form of patriotism: a love of a particular place, maintaining that the world is best governed by independent nation-states, and that only within the context of such states can a free citizenry experiment with constitutional forms of self-rule.”

Conservative nationalists, Dueck continues, “focus on preserving and promoting their own country’s interests, rights, values, security, traditions, and way of life, believing it entirely legitimate to do so.” Until Wilson, conservative nationalism was the mainstream foreign policy of both Republican and Democratic presidents.

Wilson’s worldview, however, persisted, especially but not exclusively, within the Democratic Party. Franklin Roosevelt was a pragmatic Wilsonian who promoted American interests during the Second World War but envisioned a postwar world that fulfilled the ideals of the Atlantic Charter. His successor, Harry Truman, oversaw the establishment of a world order where the United States assumed the responsibility of preserving the global balance of power.

Dueck rightly notes that FDR in his prewar efforts to aid those countries under attack by the Axis powers, and Truman in his postwar efforts to extend U.S. security guarantees to the devastated nations of Western Europe, faced fierce opposition from conservative nationalists (the America First movement prior to World War II and GOP Senator Robert Taft and his allies after the war), who worried about America overcommitting herself and becoming the world’s policeman. There has always been an isolationist, non-interventionist wing of the Republican Party that seeks to avoid becoming embroiled in foreign disputes.

The Republican Party, however, also had a conservative internationalist wing, dating back to Henry Cabot Lodge and Theodore Roosevelt, who believed that the United States had security interests that could only be protected by overseas engagement. After World War II, the conservative internationalists gradually won the argument within the GOP, led by Senator Arthur Vandenberg and future presidents Dwight Eisenhower and Richard Nixon.

Dueck notes that Eisenhower played a key role here. Eisenhower’s “success in helping to convert most rank-and-file Republicans to consensual posture of activist Cold War internationalism,” notes Dueck, “was one of his most striking and lasting achievements.” But Eisenhower’s internationalism lacked the Wilsonian vision of righting all of the world’s wrongs. His was a prudent conservative internationalism that engaged the world to promote U.S. interests, not to spread democracy and liberty to other nations.

Dueck is surely correct that the bi-partisan postwar foreign policy consensus centered round the containment of Soviet/Chinese communism broke down as a result of the Vietnam War. Among most elite liberal Democrats, Dueck writes, “Vietnam triggered a sweeping reconsideration of anti-Communist policies overseas, in favor of a more dovish internationalism.” “The new doves,” he explains, “rejected Cold War policies of anti-Communist intervention, including in Southeast Asia, and recommended a shift toward altered international priorities including the environment, Third World development, diplomatic accommodations, and human rights.”

Though Dueck doesn’t put it this way, the national Democratic Party, with a few notable exceptions like Senator Henry M. Jackson and southern Democratic congressmen, effectively sat out the last two decades of the Cold War.

Ronald Reagan, whose policies, Dueck rightly argues, contributed significantly to the collapse of the Soviet Union and the end of the Cold War, was a conservative internationalist. But Reagan, like Eisenhower, Nixon, and Theodore Roosevelt before him, was extremely prudent in the use of military force abroad; he was unwilling to intervene around the world except to advance U.S. national interests. Those 20th century Republican presidents, in Dueck’s view, carried out foreign policies that combined elements of both conservative internationalism and conservative nationalism.

The end of the Cold War resulted in confusion among America’s foreign policy elite. Some, like Charles Krauthammer, believed it was America’s “unipolar moment,” where the U.S. could work its will on the world without challenges from a peer competitor. Others, like Jeanne Kirkpatrick, saw a return to “normalcy” after 45 strenuous years of Cold War. Still others, like President George H.W. Bush proclaimed a “new world order.” And there were those, like President Bill Clinton, who saw geopolitics being replaced by geo-economics.

President George W. Bush began his term by combining elements of conservative internationalism with conservative nationalism, but ended up reacting to the September 11, 2001 terrorist attacks as a full-fledged Wilsonian.

Dueck is right that Bush’s foreign policy “was hardly the unmitigated disaster of hostile caricature.” After all, there were no major successful terror attacks on U.S. soil after 9/11, and Bush’s policies had something to do with that.

Bush’s failure was in believing in Wilsonian fashion that the United States could democratize the Middle East. Eisenhower would have defeated the Taliban, toppled the dangerous Iraqi regime, and installed pro-American leaders to reestablish order. (He did this in Iran and Guatemala in the 1950s).

President Obama was the ultimate globalist, favoring multinational solutions to global problems, supporting international institutions, humanitarian interventions, and even publicly apologizing for what he believed were America’s past sins around the world. He also continued, albeit with reluctance, to fight Bush’s wars in the Middle East and Southwest Asia and wage the global war on terror.

“The Obama years,” Dueck writes, “saw a splintering of Republican foreign policy ideas back into three perennial tendencies: hardline unilateralist, conservative internationalist, and noninterventionist.” This was the political environment that Donald Trump and other candidates confronted in the 2016 election. Trump’s success was due in part to his ability to understand and adapt to the shifting political environment.

Dueck notes that there has been a “profound shift in the composition of the Republican Party towards political populism, cultural conservatism, and white working-class voters,” and while Trump didn’t cause this shift, he did skillfully adapt to it. His nationalist rhetoric and some of his nationalist policies resonate with an important segment of the Republican Party (and some working-class Democrats).

Dueck concludes the Age of Iron with a masterful analysis of the geopolitics of the 21st century. His is a classical geopolitical worldview, drawing on the great geopolitical ideas and concepts of Halford Mackinder and Nicholas Spykman. This chapter alone is worth the price of the book.

Dueck analyzes the various threats to U.S. security interests, compares the contending doctrines for protecting those interests, and concludes that “the answer is for the United States to prepare for steady, long-term, robust competition with a range of serious adversaries, so as to better protect existing democracies against a very real variety of threats.”

The principal threats he identifies are China, Russia, the rogue states of Iran and North Korea, and Islamic terrorists—no surprises there. With Mackinder and Spykman, Dueck understands that American policies must promote the geopolitical pluralism of the Eurasian landmass.

But the wars in Afghanistan and Iraq have made Americans war weary. In some ways, the situation is comparable to the late 1960s. Then, President Nixon and his national security aid Henry Kissinger skillfully adapted to domestic politics by implementing the Nixon Doctrine (relying on allies to do more for their own security) and conducting triangular diplomacy with Soviet Russia and China. President Trump appears to be trying something similar today. Dueck doubts that triangular diplomacy will work today. We shall see.