The Age of Illusions: How America Squandered Its Cold War Victory 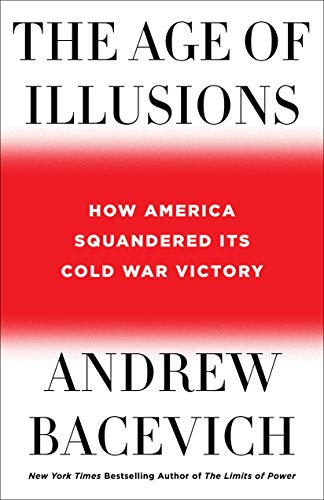 “lucid and very depressing assessment of the current state of what some Canadians term, the Excited States of America.”

The Age of Illusions is Andrew Bacevich’s eighth book and the subtitle, How America Squandered Its Cold War Victory clearly states it major theme. Bacevich is a Professor Emeritus of International Relations and History at Princeton University, a graduate of the U.S. Military Academy, and a retired Army Colonel with 23 years of service that included duty in Vietnam and the Gulf War.

Andrew Bacevich describes himself as a Conservative Catholic, which may surprise those in the liberal progressive wing of American politics who have come to admire and praise much of his work. In addition to his books, he has a written analytical essays on politics and foreign policy for a number of leading publications. His surgical dissections of the Iraq War and his ongoing dissent from American military and foreign policy have attracted praise and condemnation alike. He is a regular contributor to TomDispatch.com and The Nation.

In The Age of Illusions, Bacevich offers a portrait of the celebration by the American military, the foreign policy establishment, and political leaders, when the Soviet Union fell apart. He sees all of these constituencies as hostages to the orthodoxy of the American elite formed in the early days of the Cold War. The notion of victory in the Cold War, as Bacevich seems to suggest, may be one of the most important of all illusions.

To open, Bacevich lays out the illusions that came to dominate American thought at the height of the Cold War. He correctly alludes to the fact that these beliefs go back much further in American history. Indeed, they may well be foundational.

Following the Cold War Bacevich identifies a slight shift in the consensus that is centered around globalization; American hegemony; freedom, newly defined as autonomy with minimal constraint; and presidential supremacy, or, as he calls it, quasi-monarchy. It was a triumphal vision for a relatively brief moment, lasting little more than two decades.

By 2016, the flaws in the new consensus were exposed, and, in that election cycle its weaknesses were exploited with superb skill by Donald Trump. He offered no real alternatives to the consensus, but he knew how to rant against its assumptions and outcomes to great effect. Bacevich states that Trump’s election was a “historical turning point comparable in significance to the fall of the Berlin Wall a quarter century earlier.” Time will tell how prescient this claim is.

The body of The Age of Illusions lays out the content and context of the consensus in politics, in foreign policy, and in economic policy based on faith in growth. Woven into the narrative are the changing material landscape of American life and the new value system of the young, whose formative years were so vastly different from that of the Cold War generation. This takes Bacevich back through the half-century since the end of World War II where these changes were planted and then came to full bloom in the sixties and seventies.

Through this part of the narrative, Bacevich examines the persistence of the Cold War illusions and assumptions as they devolved into his post-Cold War illusions that politicians and elites continued to espouse. American presidents and presidential candidates who perpetuated this obsolete political culture and embraced an empty value system hiding behind Cold War rhetoric are lambasted for their lack of insight and/or political courage.

This is a bi-partisan condemnation, although Hillary Clinton takes the worst of it. George Bush and the architects of his Iraq debacle are harshly evaluated, while Barack Obama is chastised for intellectual dishonesty over his Afghanistan policy. Donald Trump is simply dismissed as a “modern P. T. Barnum who successfully pursued fortune, celebrity, lots of golf, plenty of sex, and eventually the highest office in the land.” Absolutely no one is spared in this powerful and highly readable indictment.

The final 50 pages focus on the 2016 election. Starting with the presidential primaries, Bacevich puts several candidates in the spotlight to expose their shallowness and lack of understanding of the post-Cold War World. Considerable attention is paid to the Republican race for the party nomination for president, where the leading candidates, in particular Jeb Bush and Ted Cruz, melted under the glare of Trump’s empty populism.

Nor does the media escape criticism as Bacevich expounds on its obsession over the shallowness of Donald Trump’s road show and his gaffs, blunders, and outrageous claims and charges. Major columnists of the New York Times are called out by name for their failure to understand what had produced Trump and for obsessing over his half-truths and lies. There are times, in fact, when it seems that Bacevich himself is guilty of the same Trumpsession. Unfortunately, this detracts from the grave tone of The Age of Illusions.

Bacevich seems to think that Trump and Trumpism will be superseded by a more rational world. It is difficult to agree with this assessment after reading this lucid and very depressing assessment of the current state of what some Canadians term, the Excited States of America.