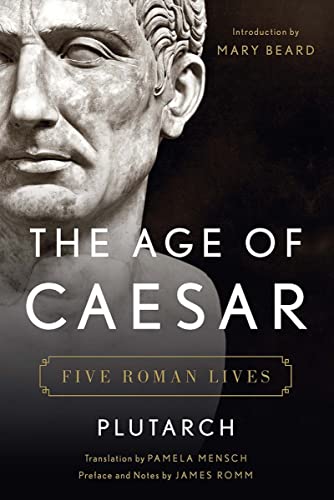 Andreas Kluth tells us that Plutarch, who lived from 46 CE to 120 CE, is widely acclaimed as the father of biography.

Although Plutarch lived after the people he wrote biographies about, material about them was readily available to him. For example both his grandfather and father lived during the period of the five men included in Dr. Mensch’s book. In addition, oral histories and written materials existed. Unfortunately, much of the written material has been lost to time.

In his original Lives, frequently referred to as Parallel Lives or Plutarch’s Lives, Plutarch selected a prominent Greek and then sought a Roman whom he thought was the Greek’s equal. Thus the notion of parallel lives.

Mensch’s brilliance is in taking Plutarch’s idea a step further. She selected five prominent Roman figures whose lives intertwined. The result is a very interesting discussion of these notable whose influence on Western history is profound.

This time period was one of great violence—faction against faction, friend against friend, and even family member against family member. Pax Romana? It was anything and everything but! The book begins as the Roman social and civil wars that destroyed the Roman Republic were coming to an end. Strabo, a much hated general and Pompey’s father was now dead. Sulla had not yet become dictator, but was about to do so.

Dr. Mensch does a fantastic job of referencing back and forth between the five men, as required, so the reader can better understand the intertwining nuances of each biography. Dr. Mensch footnotes these instances and provides explanations where possible.

For example, she devotes over one-third of her book to Pompey’s biography and supports it with 225 footnotes. These footnotes not only clarify some of the things Plutarch wrote, they also relate the discussion of Pompey to the other four biographies. This was very helpful.

Noted British Historian Ian Morris, who currently teaches at Stanford, states that Dr. Mensch’s translation of those “five most tragic figures in ancient history” is brilliant and sets a high standard for such works.

Pompey, unlike his father, was, at this point well liked primarily because of “his temperate way of life, his military training, his persuasive speech, the trustworthiness of his character, and his affability when meeting people.” He was a young man then, but over the years he squandered his good will until it cost him his life.

Plutarch paints a great picture of his life from the time he stood trial before Antistius until his demise one day after his 58th birthday. Mensch’s translation is well done.