Against Security: How We Go Wrong at Airports, Subways, and Other Sites of Ambiguous Danger 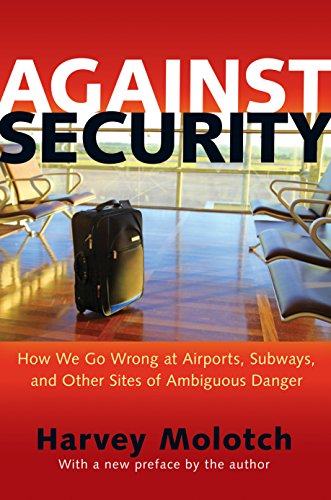 “. . . interesting . . . attractive to an audience much broader than social scientists.”

When terrorists flew airplanes into the World Trade Center and the Pentagon on 9/11, they scared a lot of Americans, and they made us feel existentially less secure.

Our reaction was emotional, not logical. About 3,000 people lost their lives as an immediate consequence, but nearly five times as many survived. The survivors and responders suffered health problems, and no one would belittle the enormity of the tragedy.

Yet to place the tragedy in a different perspective: Few have a similar terror of highway fatalities, which kill more than ten times that many people in America every year.

Following 9/11, U.S. society reacted by constructing a complicated and largely useless “security theater.” Policies give the appearance of keeping control and protecting people against existential threats, but in reality they do very little.

Recently, waiting on line for various checks at an airport, I stood next to a pilot (who also has to go through many of the same checks as passengers). When the TSA personnel were not looking, he rolled his eyes at me and said “You know, I am licensed to bring a gun into the cockpit, but I can’t bring more than three ounces of shampoo!”

Americans’ sense of security was deeply and profoundly upset by the terrorist attacks of 9/11. What followed was an official program of reassurance. There are, of course, policies to insure that such attacks do not take place again. But the most visible policies, and the ones that affect our lives the most, are programs to reconstruct the reality that preceded 9/11. It is not security that we seek to rebuild so much as our former naive sense of it.

At the foundation of all this is what scholars call “risk irrationality.” People underestimate the risk of driving a car or crossing a street, but overestimate the risk of flying airplanes. We worry less about things over which we think we have control (such as driving), and more about the potential for fatal events we cannot do anything about.

Since the Department of State began keeping records in the 1960s, there have been fewer deaths worldwide from terrorism than Americans drowning in bathtubs. We do not ignore bathtub safety, but there has been no war on bathtubs, nor unfunded invasions and occupations of bathtub producing nations. Erecting a very public government apparatus to fight terror seems more comforting and responsive.

Harvey Molotch, a sociologist at New York University, has written a study on various examples of security theater after 9/11. His cases are public toilets, New York subways, airports, the rebuilding at ground zero, and the disaster in New Orleans after Katrina. Each of the case studies represents a different type of sociological study, and each presents new insights.

Public bathrooms are a big source of anxiety for many people, and they are where Professor Molotch begins. He details the way that public facilities differentiate by class, gender, and disability. It is a fascinating study, but somehow it seems to be a study that interested the author and which he felt compelled to fit into a book about security. Like many of the interesting facts presented in this book, it tends to detract from a coherent argument rather than supporting it.

The New York subway system is a bit more on topic, although again it is from a study that employs a methodology different from the rest of the book. And the point of the study is not always aligned with the book’s thesis, which seems to have been developed after each of the studies was complete.

Academic criticism notwithstanding, you will remember this book the next time you exit a HEET (High Entrance/Exit Turnstile). Try going through one while carrying a small bag or briefcase, and then try to imagine what it would be like to evacuate a train full of people in an emergency.

The MTA has spent millions of dollars advertising their advice to riders “If You See Something Say Something.” We are all surveillance officials when it comes to packages in underground trains. But when the metal hits the rails, subway officials seem to care much more about preventing fare beaters with intricately designed exits than they care about public safety.

Airports are an obvious and attention grabbing topic for study. It is a challenging study because of TSA secrecy, and Professor Molotch did not gain the sort of interviews with TSA policymakers that an enterprising journalist might have hoped for.

The TSA has piled on more and more precautions to the point that one must now provide an ID that matches exactly the name on a ticket, take electronics out of bags, and carry no more liquids than can fit in three-ounce bottles in a clear quart-sized baggie, remove shoes, belts, and jewelry, and then stand in a full body scanner or go through a pat-down.

But it is not clear from press accounts that this set of precautions has ever stopped a terrorist or prevented an attack. It has been quite successful in preventing this reviewer from bringing bottles of water into the dehydrating atmosphere of long flights.

The only plots uncovered were foiled either in undercover police operations (many of which seem to involve entrapment in deeds that would otherwise have never been planned) or by passengers past security and aboard airplanes. Indeed, as rules become more onerous for the traveler, terrorist planners operate with an incentive to inflict greater and greater casualties, and the rules are not that difficult to circumvent.

One survey reports that 11 percent of travelers have canceled plans to fly because of invasive security procedures. Instead they chose to drive in cars, which is much more dangerous. Analysts at Cornell University estimated that an additional 2,300 lives were lost in cars in the two years following 9/11 because drivers wanted to avoid airport security. A New York Times columnist pointed out that it would take “four fully loaded Boeing 737s crashing each year for air travel to kill that many people.”

The reaction to 9/11 is well symbolized by the convoluted process for rebuilding at the ground zero site. Now under construction is the “Freedom Tower,” which will reach 1776 feet (if the television antenna on top is counted in its official height). Like the World Trade Center, it is financially unfeasible real estate, and to break even it must rely on government organizations paying much more than market rents.

One of the author’s friends has named it the “Bomb Me First Building.” This is consistent with my own idea for finding a fitting corporate client: I suggest subsidizing a lease for the top floors to the Target Corporation, with the condition that they place their logo on the outside of the building.

A penultimate chapter examines the causes and aftermath of Katrina in New Orleans. This is often seen as an act of nature. In fact it was predicted in advance and was primarily due to the design and lack of maintenance of levies that reclaim land in the city.

A few of the historical facts are a bit off in this chapter. John Law was a Scot (not an American) who founded the Mississippi Company (not Louisiana) in 1717 (not the previous year) with a monopoly to explore for gold. He misled investors because the company did not make any effort to explore for gold (far more egregiously untrue than false claims of benevolent conditions). This has little impact on the chapter’s argument, but again it is not entirely clear how that argument fits into the overall thesis of the book.

Lest anyone think that social scientists are more astute than the government at predicting disasters, the American Political Science Association cancelled its 2012 meeting the day this review was written because of floods from a tropical storm that struck on the exact same date as Katrina but seven years later.

But bright people can have some foresight.

Expecting bad weather, the social sciences editor for Cornell University Press (who probably would have asked the author for a more tightly argued manuscript) decided nine months ago to skip the APSA meeting for the first time in more than 30 years.

Professor Molotch concludes each chapter with suggestions for how to improve toilets, subways, airport security, ground zero development, and rebuilding New Orleans. Some of the suggestions make eminent sense, but asking people to be more decent with each other is neither likely to be implemented by government planners nor drawn from the evidence presented in the various case studies.

Against Security is an interesting book that will appeal to all sorts of readers, published by a prestigious academic press, and retaining some of the trappings of a serious academic study. It never falters in presenting interesting and thought provoking stories, which will make it attractive to an audience much broader than social scientists.

What it does not do—and one has a reasonable expectation of this in a book from Princeton University Press—is to give us a thesis, examine that thesis with carefully chosen case studies, and draw conclusions from the evidence presented. This is a good book, and one has the feeling that with another draft or two, it could have been a great one.