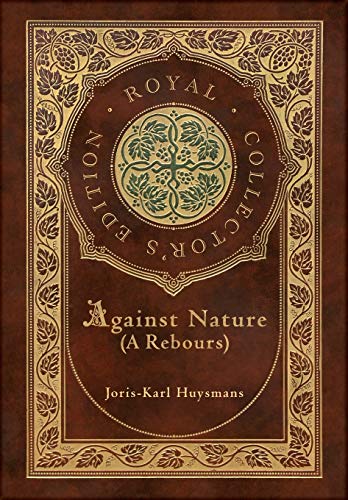 Joris-Karl Huysmans (1848–1907) was a card-carrying member of the artistic community in turn-of-the-20th century Paris. Indeed, his novel À Rebours, first published in 1884, is a seminal document in what became known as the aesthetic of decadence.

His protagonist, Jean des Esseintes, stands as a model for the inward-facing aesthete whose positions are extreme. Huysmans himself seems to have lived a conventional life, but his “hero” represents a series of positions designed to “shock the bourgeoisie.” Although the author published several other volumes (of poetry, then novels influenced by the Naturalism propounded by Emile Zola) this book is his enduring legacy, an emblem of the period and precursor of what was to come. Almost every form of excess is captured in these pages, and the list is long.

A rich renegade, des Esseintes withdraws to a suburb of the city and—attended by silent servants —constructs a kind of private paradise of the senses. He paints his walls with extravagant colors: “There was no point in thinking of salmon tints, or maize and rose tints, whose effeminate associations ran counter to all ideas of isolation; nor any need to consider the shades of violet, which lose their lustre at night . . .” He eats the most refined and rare of foods, builds an organ that spews out perfume instead of sound, reads religious tracts with which he disagrees, and admires—beyond all other contemporaries—Charles Baudelaire.

Hoping for some sense of contrast in an otherwise immobile room, the connoisseur bejewels the shell of a tortoise who wanders across his lush carpets until it dies.

Des Esseintes plans a sojourn in England, but a visit to a tea shop and a bookstore filled with English books suffices as a journey; why should he let the “real thing” substitute for the imagined one? Satisfied, the traveler, having digested a bowl of oxtail soup and a slice of Stilton cheese, goes home.

The book has little dialogue and scarcely any interaction with secondary characters. Instead, it offers a catalogue of Huysman’s likes and dislikes; he praises the poems of Stephane Mallarmé, for instance, and the paintings of Gustave Moreau. Guardedly he reads Dickens and Edgar Allen Poe; more often he refers to names long lost: “whether in the work of Dupanloup or Landriot, of La Bouillerie or Gaume, of Dom Guéranger or Father Ratisbonne, of Monsignor Frappel or Monsignor Perraud, of the Reverend Fathers Ravignan or Gratry, or the Jesuit Olivain, the Carmelite Dosithée, or the Reverend Father Chocarne, sometime Prior of Saint-Maximin.”

This figure of “the dandy” took stage center in the period we call La Belle Époque. The poets Barbey d’Aurevilly and Gerard de Nerval, for instance, walked the streets of Paris with a lobster on a leash. Oscar Wilde—who, according to Gilbert and Sullivan, “walked down Picadilly with a poppy or a lily”—based his portrait of Dorian Gray on the character of Des Esseintes. The real life model thereof is probably the aristocrat, Count Robert de Montesquieu (who also served as the inspiration for the Baron de Charlus in Proust’s monumental, À la Recherche du Temps Perdu.) The subject of countless photographs and portraits, Montesquieu was painted lounging in gray-garbed slim elegance, by Giovanni Boldini; he stares off into the middle distance, condescending and aloof. He was the standing model for “Arrangement in Black and Gold” by James McNeil Whistler. Toward the end of his life, the Count had this to say:

“It is a strange feeling—and more strange than painful—to realize suddenly, brusquely, without any warning, almost without having seen it coming, that one’s life is over. You are still there, in a state of greater or lesser dilapidation, and still holding on, with your faculties intact, but now ill-suited to the taste of the day; you have fallen into disuse, and have become a stranger to the very contemporary civilization you once led, yet whose current manifestations do not wound or shock you as much as they appear empty and futile.”

Such anomie pervades the book. Des Esseintes is the very emblem of the disaffected citizen, the man who withdraws from “the taste of the day” and cultivates a private garden while his “life is over.” Disdain and scorn are his principal moods; his aim is that of pleasure refined past the point of release. For company, the recluse hires prostitutes but wearies of them soon. He has doctors but no friends. Alone, he hunts for satisfaction and finds it hard to find.

À Rebours has been often translated, sometimes as Against the Grain. Its rhetoric, however, partakes of fustion if not fustiness and the consciously old fashioned feel of those two terms—fustion, fustiness—heralds the feel of the whole. This new version, Against Nature, strives mightily to capture the book’s peculiar style and—more often than not—succeeds.

The translation by Theo Cuffe incorporates the particular wordiness of Huysmans’ diction, and sometimes it’s a slog. Sentences such as the following are not rare: “At this point he had reached beyond all argument or debate; he was experiencing an indefinable impression of veneration and fear, his artistic sense was subordinated to the well-crafted rituals of Catholic ceremonial; his nerves shuddered at these memories; then, in a sudden mood of revolt, of swift volte-face, ideas of monstrous depravity sprang up in him, thoughts of the sacrileges provided for in the confessors’ manual, degraded and ignominious abuses of the holy water and the consecrated oil.”

Or, of “a saffron-colored liqueur of exquisite delicacy," Huysman writes, “It gave off a subtly concentrated aroma of angelica and hyssop, mingled with sea-grasses whose iodine and bromine content was masked by syrup; it stimulated the palate with a spirituous fire dissimulated under an altogether virginal and inexperienced sweetness; and it seduced the nostrils with a hint of corruption, wrapped in an embrace that was at once childish and devout.”

Not every reader will find such language to their taste. But for those who wish to slice their way through the thickets of verbiage and—no better word for it—perversity, this description of what it means to go “Against Nature” instructs us as to our own nature and what it can consist of. It’s not a pretty picture, but a compelling one.