Again, but Better: A Novel 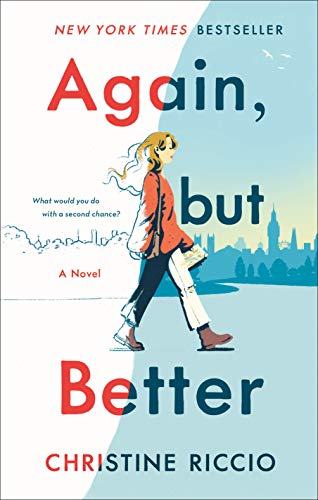 “Again, but Better is a fun idea. Who doesn’t like a love story with time travel and a chance to do things over again—and do them the right way?”

“I’m leaving the country because I have no friends. That’s what it comes down to. People can continue along most paths, however unpleasant, if they have at least one good friend with them. Not have one has forced me to consider my path-changing options. Now, I’m thousands of miles over the Atlantic in a giant hollowed-out pen with wings, on my way to a study abroad program that’s irrelevant to my major.”

Shane feels like she hasn’t been doing college “right.” She’s done the whole going to class pre-med thing, but she’s not actually living the life. She hasn’t done anything worth writing home about. That’s what she hopes to change. She’s doing a lot of writing in her notebooks—mostly lists about what to do and not do—with her life.

It’s 2011. She arrives in London, ready to start fresh. She meets her roommates and forces herself to be the opposite of who she’s always been. She makes herself be outgoing and friendly, talking to people like she’s known them a long time. She meets the boys in the dorm and becomes part of a friend group on the very first day. With these people, she feels she can learn what it means to live and find adventure. The very first weekend, they head to Italy.

“It takes us less than two hours to get to Rome. As we stride through the airport, I’m struck over ad over again with jolts of excitement as I read the signs around us. They’re in Italian, and I know what they all mean! It’s probably annoying, but I can’t help reading them out loud every few seconds and translating them.”

Shane gets to know these friends, falls in love with a guy named Pilot . . . and everything falls apart. Her old self-doubt comes into play, her parents find out she’s not studying pre-med, and she leaves Pilot and heads home into a nightmare of a family reunion.

It’s 2017. Shane is almost done with med school, six years later. She looks up Pilot, and they get together for coffee. It doesn’t go well . . . until they get on an elevator. The elevator jerks—and Shane is back in 2011. Pilot, her old friends, her old dorm. What?

And suddenly, she has another chance. She can make it right. Make it the way it was supposed to be.

Again, but Better is a fun idea. Who doesn’t like a love story with time travel and a chance to do things over again—and do them the right way?

The problem is with the length and wordiness of the book. In the Author’s Note at the beginning of the book, Riccio says the book comes from her own experiences. Unfortunately, this seems to mean she has a hard time cutting out the parts that aren’t necessarily interesting to other people. Lots of extra words and unneeded explanations. For those who don’t mind, the story will be fun. For those who like things leaner, you might want to give this a pass.