Aftershock: The Next Economy and America's Future 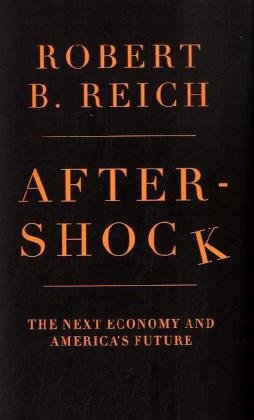 In 1984, one of the more unlikely lecture duos toured the country from one college auditorium to the next.

Each man would give a 10-minute lecture explaining their domestic and world views, engage in respectful, sometimes good-natured debate, and take Qs and As from the audience.

No, it wasn’t dull. Quite the contrary. Ideas flowed and imaginations were stimulated. Interruptions were verboten. Sometimes the Democrat economist and Republican executive actually agreed on certain issues. One walked away heartened that democracy could encourage such dialogue, policy and politics happily co-existing.

So much for those rose-colored days.

Reich became Bill Clinton’s Secretary of Labor; Rumsfeld reprised his role at the Pentagon under Bush 43. Politics morphed into sports and entertainment; policy took a back seat to the freak show of cable and Internet; and if by some chance you were a moderate, your political prospects were roughly those of a duckling caught in a quickly closing bench vise.

Reich is still around (so is Rumsfeld, though I suspect many Democrats wish he had stumbled into that bench vise). And, unlike another liberal economist (initials: P.K.) who becomes more vein-popping with each op-ed column he pens in The New York Times, Reich has been consistent, reasonable and readable in his work for magazines like The Nation and online at Slate.

Yet I must deal with Reich’s latest work, Aftershock: The Next Economy and America's Future.

But, first, a little more procrastination.

To most businesspeople they are the Vatican curate—their view of the world is broad, their data can lead anywhere; and long are the days since they actually worked in a parish, if ever (or, for economists, a business).

As with the archbishops and cardinals, economists offer philosophies that seem acceptable in concept but rarely answer the day-to-day challenges facing Father William or sole proprietor Smith.

Worse still are economists who mix their ideas with politics, or at least espouse policies that are reliable party platforms.

Unfortunately, Reich is guilty of this. Yes, he is armed with data about our economic problems, but it is mainly to support a Keynesian narrative. And let’s be clear: The battle that is currently raging among political economists is all about narrative—the causes and effects of our financial implosion, as well as the prescriptions to clear the damage.

The opportunity that Reich and others see is the necessity to get a stake in the ground now because what we may be experiencing is not a “Great Recession” but rather a “Great Restructuring” that could fundamentally change capital, labor, and consumer markets in America.

Reich’s thesis is that we require a “rebalance” of the economy so that wealth is shared more widely; that our fundamental problem is that too much money has ended up in the hands of too few people. Therefore, Americans no longer have the purchasing power to buy what the U.S. economy is capable of producing.

Reich dips back into history to make his points, using the symptoms leading up to the Great Depression as a mirror to the run-up of today’s troubles. He even devotes considerable space to Marriner Eccles, FDR’s first Federal Reserve chairman, to serve as his oracle.

But things are off kilter in Reich’s economic history—for example, his belief that the “Great Prosperity” of 1947–75 came about from the foundation set by the New Deal is extraordinary given the fact that only the U.S. industrial infrastructure was left standing after World War II. Obviously, other countries whose means had been ravaged had to buy goods from someone.

But Reich is undeterred and asks, “Have Americans been living beyond their means or is the real problem that their means haven’t been growing?” What is particularly disturbing about this question is the denial of individual responsibility in Reich’s world—we are swept along by the tides. And those controlling the tides are the rich, the well-off—“the business class” not the “working class.”

Yet, as a former member of the Clinton administration who helped form economic policy (and did little to make the kinds of changes he argues for in Aftershock), Reich isn’t inclined toward mea culpas. Instead, he points the finger at Alan Greenspan whom Reich says, “insisted Clinton cut the deficit” so that Greenspan could cut interest rates.

Nor does Reich fault Clinton for leaving the U.S., many would argue, more exposed than ever to the international economy and the first wave of what would become millions of outsourced American jobs to overseas companies.

It would be impossible to give you all of Reich’s ideas of how to revitalize our economy but, rest assured, they would cost trillions and have the requisite set of unintended consequences attached, as even the best of social and economic programs do.

In the end, we are left not with an economic prescription but a political screed— something that could just as easily have come from liberal think tanks like the Brookings Institution or the Center for American Progress.

Yet I will now perform a reviewer’s backflip and recommend you read Aftershock whether you are one of those economic anarchists nursing your Taser wounds from the recent Toronto G-20 summit or a Hoover Institution vulcan who believes Milton Friedman was too squishy on free markets. If what we’re facing really is a Great Restructuring, we’ll need to consider all ideas, all comers, and perhaps with the same open mind that the Reich-Rumsfeld show encouraged.

Besides, Reich is probably the only economist who has ever done a comedy sketch with Conan O’Brien. Watch it at Reich’s website. The only thing funnier would be Paul Krugman as The Werewolf.