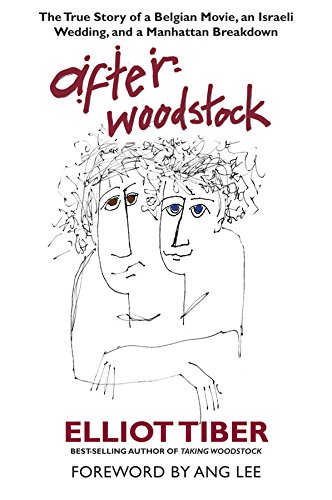 After finishing After Woodstock: The True Story of a Belgian Movie, an Israeli Wedding, and a Manhattan Breakdown, the beleaguered reader cannot escape the fact that he knows more about Woodstock author Elliot Tiber than he does many of his own relatives and friends.

This is perhaps because After Woodstock (480 pages) is the third volume of Tiber’s memoirs, following the action first laid out in Taking Woodstock: A True Story of a Riot, a Concert and a Life (224 pages) and then continued in Palm Trees on the Hudson: A True Story of the Mob, Judy Garland & Interior Decorating (224 pages), which means that, altogether, the reader has weighed through 928 pages of life with Elliot.

And all of this is complicated by the simple fact that most, if not all, of the nearly 1,000 pages of anecdotes and adventures, tsuris and hubris, and more than a little desire to be a part of the “business we call show” can be summed up with that one word: Woodstock.

Of the three volumes, Taking Woodstock stands high as the most readable as well as the most interesting, as it is the story of Woodstock itself and how an ambitious young man became enmeshed in the rock concert that would become a legend, by housing the concert’s offices in his family’s rundown upstate motel and by talking a very kind farmer named Yasgur into hosting the concert on his back acreage.

Who knew that a million hippies would turn up? Who knew that upstate New York would be closed down and nirvana would set in for a long, wet weekend of music, drugs, and sex?

Such are the tales of Woodstock. Careers were made. Legends were born. Children conceived. Along with the occasional bad trip. There are myriad stories. Taking Woodstock was Tiber’s own.

“By the spring of 1968, I had reached the absolute top of my game as an interior designer. I had almost become a fixture in elegant Sutton Place and Park Avenue in Manhattan, and they knew me on Long Island, too. In mid-April, I had been given carte blanche to organize an extravagant birthday party for a big-shot mob boss on a Hudson River cruise boat. One of the party’s guests of honor was none other than my beloved idol, Judy Garland. Though she appeared frail and rather out of it, Judy had agreed to perform a few songs. She sang ‘Over the Rainbow,’ which sent me over the moon. Later that night, a fight broke out and total anarchy ensued. People even tossed my rented palm trees overboard as the boat passed the Statue of Liberty. In the midst of the chaos, I suddenly found myself face to face with Judy herself. We talked for only a few minutes, but she had some beautifully eccentric yet heartfelt things to say about what it meant to have a home. Those moments with Judy provided me with much-needed proof that a happier life awaited me over the rainbow—a destination that I had come to realize might be waiting for me in California.”

In these few words, Tiber tells the reader everything he needs to know about Palm Trees, making it possible to jump from Taking Woodstock to After Woodstock without skipping a beat.

After Woodstock begins with Elliot taking Judy’s advice, and, with a duffle bag stuffed with cash stowed in the trunk of the Cadillac he’d purchased with his share of the Woodstock profits (the bulk allowed his parents to pay off all debts they’d previously accrued from their mismanagement of their rundown motel and to set themselves up for the rest of their lives—the fifty grand in the trunk and the new car allowed Elliot to search for broader vistas and new challenges), he takes off for Los Angeles, where he helps to restore an old Spanish style mansion that may or may not have previously been the home of actress and comedienne Marie Dressler.

Los Angeles doesn’t fit, however, so back in the Caddy, with the cash in the trunk still intact, and back to New York City, where he should have stayed to begin with.

Elliot wanders the streets of Manhattan, restless and rootless, seeking sex, if nothing else in the early part of the 1970s.

One night, after visiting the usual watering holes, The Anvil and haunts in the old meatpacking district, Elliot visits what he calls the “Last Chance Inn:” White Tower.

“If you hadn’t scored yet, you were relatively sure to find guys here who were hungry for something there at the burger joint. If you still couldn’t score, you’d make sure to leave before the early morning work crowd came in for their coffee and donuts.”

That night, in lieu of hamburgers, Elliot Tiber would find a companion:

“Andre had a kind and sensitive face, framed by a strong five o’clock shadow. His black hair was short and neatly combed, but starting to grow a bit longer along the back of his neck. His body looked thin but sturdy in his leather outfit. I noticed that he hands were especially delicate, with long fingers and well-manicured nails. As he spoke, he moved his hands in expressive gestures that suited the pace and tone of his words. He sat with a poise and elegance that seemed weirdly at odds with the outfit he was wearing. Had he been dressed in flowing robes, he might have resembled some kind of nobleman or prince that night. I found him dazzling in a quiet and subtle way—far superior to the usual cut of meat that I usually found hanging around the city.”

At least on Elliot’s part. Andre proves a bit cagey.

It seems that he is in America only for the rest of the summer, during which time he is directing a play.

Finally, the two lovers must part. Andre returns to his role as the most innovative director in Belgium.  Elliot sulks.

One night, he sees Suzanne Pleshette being interviewed by Johnny Carson about her new film If It’s Tuesday, It Must be Belgium. And like Barbra Streisand clutching her yellow roses to her breasts as the tugboat she’s rented races to catch up with Nicky Arnstein’s ocean liner before it gets out to sea, Elliot is off to Belgium.

Andre is less spooked by this turn of events than he might have been and allows Elliot to move in. And Andre goes back to work being innovative while Elliot stays home and watches TV:

“Mostly I liked to watch the reruns of I Love Lucy that the Belgian stations aired each day. If I wanted to improve my French, I’d pay attention to the French subtitles that ran on the bottom of the screen. But mostly, I watched to enjoy Lucille Ball’s genius for physical comedy. That being said, I couldn’t help feeling that her character was a total pain in the ass, especially compared to the character Ricky, played by her real-life husband Desi Arnaz. There were some episodes where I couldn’t understand why Lucy’s husband didn’t force her onto a guillotine and lop off her head. Still, I found it endearing that Lucy kept on trying to perform onstage with Ricky. She never gave up on that dream, and I admired her perseverance. After all, it was a trait to which I could totally relate. As I watched Lucy come up with one crazy idea after another, I started to think to myself: Hey, maybe I’ve got some crazy ideas of my own that I can play with here.”

The reader comes to a full stop here. First because of the suggestion that the beloved Lucy should be put to death by her abusive husband Ricky, who was often known to infantilize his wife by putting her over his knee and spanking. And second by the fact that Elliot Tiber had the self-awareness to recognize his own pain-in-the-ass-edness. But then there was the rather fearful new knowledge that Tiber was actively considering taking career advice from Lucy.

What would he do next, the reader wonders, work at a chocolate factory? Belgium is, after all, full of them. Or perhaps impersonate Superman, or dress as Tallulah Bankhead, or steal John Wayne’s footprints from Grauman’s Chinese?

Sadly, he does none of these and the pages go by slowly. Andre and Elliot, Elliot and Andre.

When the book works best, it stands as a tribute to a relationship that endured and deepened up until the moment of Andre’s last breath. When it falls apart, Elliot conjures up once more that word Woodstock, and reminds us of just how essential he was, as he makes publicity appearances and gives lectures on each anniversary, all of which Andre disapproves of.

Had Tiber focused his book solely on his relationship with Andre and on his experience as a gay man in the ’70s and, especially, during the AIDS crisis of the 1980s, his work would have carried a weight and a purpose that it lacks.