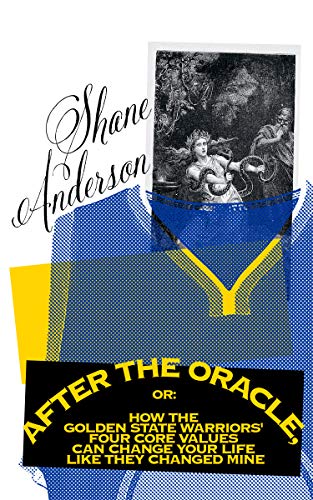 “this small volume offers a fascinating and remarkable story of one man’s love of sport, devotion to a team, and how that saves his life.”

The title of Shane Anderson’s book suggests that the subject is basketball and/or the Golden State Warriors of the National Basketball Association or Shane Anderson’s life changing experiences—or some combination of these. The title may also suggest that this is some sort of inspirational self-help book. In one sense, it is all of these. In another sense, it might be none of these. Or the Oracle may be something that transcends all of these.

This is a highly personal book in which Anderson goes deep into his troubled life, first wallowing in the troubles, and then seeking a way out and a return to what some might regard as “real life.” Part of the way out is through his attachment to basketball and his love of the Golden State Warriors.

As to the “oracle” in the title, that may seem to be a reference to the home arena of the Warriors in Oakland, or it could also be the Oracle of Delphi.

The story opens with Shane Anderson, poet, writer, and translator, in front of his computer screen in Berlin watching a streaming of the final game of the Warriors’ 2010 season. After checking the NBA standings, he comes to the realization that in terms of draft position it would be better for the Warriors to lose than to win. Of course, the Warriors win.

Anderson describes himself as jobless, anxious, tired, and distant. In addition, he has just come out of a divorce, is living in a foreign country, while “failing to recover from a psychotic upbringing and major back surgery.” These are a few of the issues he is facing or not facing.

From this point, Anderson’s life seems to drift downward. He tries returning to the United States, and that doesn’t help. Before going back to Berlin, he is moved by the final line of a Rilke poem: “You must change your life.” Also, he sees the Golden State Warriors on television, and this triggers memories of his love of basketball and his love of the Warriors.

Back in Berlin, he is alone again and still haunted by Rilke’s, “You must find a way to change your life.” Several things will help him to start that process.

First, against the advice of his doctor, he starts shooting baskets and then playing in pickup games.

Second, at the beginning of the 2015–2016 NBA season, he resumes streaming Warriors games and reads everything he can find about the team. In his research he encounters Steve Kerr, the Warriors’ Coach, for the first time, along with Kerr’s four core values: Joy, Mindfulness, Compassion, and Competition. For Anderson, “It was like lightning.”

Third, he meets Melanie while working on a translation job. She is an academic whose literary interests coincide with his. Their first social encounter went poorly. Anderson is depressed by his own awkwardness, and he avoids Melanie for several months.

This was the beginning.

From this point, Anderson examines each of Kerr’s four core values, exploring their meaning and looking to develop them within himself. Each of the core values will find illustration in one or more of the Warriors players and in the ideas of Steve Kerr.

Joy is found in Steph Curry’s approach to the game. Mindfulness finds expression in Klay Thompson. Competition is seen in Kevin Durant’s game. Compassion is expressed often by Steve Kerr. At the heart of the success of the team is Trust, found throughout the organization both on and off the court. Anderson comes to believe that Trust is “The Secret of Basketball.”

Two other points are important to Anderson. First, the literary scholar Hans Ulrich Gumbrecht’s analysis of sports—how sports put the player and the spectator on the same track and the significance of that journey, for both. Second, Anderson finds another important point from an interview he conducts with Andre Iguodala, the Warriors sixth man. Anderson asks why Steve Kerr emphasizes “Joy” so much. Iguodala’s answer completes Anderson’s quest.

After the Oracle closes with Anderson pleased with his life, his marriage to Melanie, and the arrival of their son. It is difficult to say if the “Core Four” would work for others as they did for the Golden State Warriors and Shane Anderson, but, as a study in the salvaging of a life, this small volume offers a fascinating and remarkable story of one man’s love of sport, devotion to a team, and how that saves his life.