After the Fall: The Remarkable Comeback of Richard Nixon 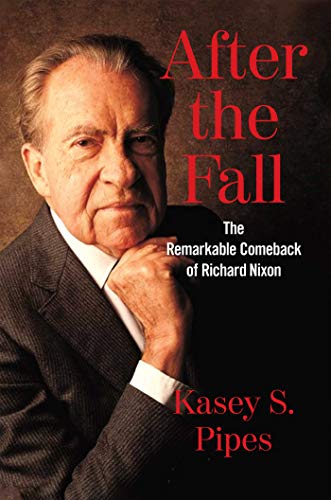 “Pipes recounts the gradual process by which through the sheer force of his intellect, Richard Nixon became relevant again to the debates about America’s proper role in the world.”

As President of the United States, Richard Nixon ended U.S. involvement in the war in Southeast Asia that was tearing the country apart, ordered an airlift of supplies to Israel and a nuclear alert during the Yom Kippur War that helped Israel survive and deterred the Soviets from directly intervening in the conflict, began a peace process in the Middle East that led to the Camp David Accords, and brilliantly exploited the Sino-Soviet split to strengthen the policy of containment.

Nixon’s foreign policy was not without mistakes and setbacks, but overall he should be rated among our nation’s greatest foreign policy presidents. Unfortunately, the stain of Watergate clouds the record of his presidency. Most historians and journalists refuse to apply the same standards in their judgment of Nixon that they do to Franklin Roosevelt, John Kennedy, Lyndon Johnson, Bill Clinton or, for that matter, any other president.

It is doubtful, therefore, that Richard Nixon will ever get the credit he deserves for skillfully guiding the ship of state during dangerous times abroad and troubled times at home.

Nixon’s comeback was legal, physical, mental, and financial. After he resigned the presidency and returned home to San Clemente, Nixon’s legal status was in limbo until President Ford pardoned him for any crimes he may have committed in the Watergate scandal. He fought several civil legal battles and also waged a legal fight over the rights to his presidential papers.

Nixon nearly died from complications of phlebitis. It was a slow, painful recovery, which some of his detractors refused to acknowledge. Indeed, Pipes relates that Nixon at one point was hours from death due to internal bleeding and only survived thanks to quick action by members of the medical staff at Long Beach Memorial Hospital.

It also appears that he suffered from depression, something that took all of his willpower and the help of family and friends to overcome. Nixon in this regard followed his own terse advice: “Never dwell on the past. Always look to the future.”

Nixon’s legal, medical, and tax bills stretched his finances to the limit. Pipes points out that at one point in 1975, he had $500 in his bank account. He desperately needed to make money.

He was determined to write his memoirs and assembled a team of researchers, including former aides Frank Gannon and Diane Sawyer, to help him. “Nixon established the writing process,” Pipes writes. “[H]e would call for his writers to join him in the office while he discussed his recollections about his life. They wrote as he talked.”

Nixon assigned writers topics to research and to provide draft sections and chapters that he would edit. It was in some respects similar to the way that Winston Churchill produced his memoir of the Second World War.

Indeed, Nixon in writing his memoirs had the same goals as Churchill: to make money, but more importantly, to write history that portrayed him in a favorable light. His memoir, entitled RN, the first of nine post-presidential books, was published in 1978.

In the presidential election year of 1976, Nixon traveled to China, the site of his greatest foreign policy accomplishment. He spent nine exhilarating days there, meeting with Chinese officials and students. The trip, Pipes writes, “represented an important step forward on the long road back” for Nixon.

Demand for money led Nixon to do a series of interviews with David Frost beginning in March 1977. Nixon earned $600,000 from this project and skillfully resisted Frost’s efforts to get him to admit to criminal conduct in connection with Watergate. Instead, Pipes notes, Nixon admitted to covering-up for the misdeeds of his friends and staffers. Nixon confessed only, writes Pipes, that “he had been too loyal in trying to protect his friends. This is the same line he would return to any time Watergate came up for the rest of his life.”

Nixon’s comeback was also helped by a few of his former political adversaries. Pipes relates the extraordinary story of Hubert Humphrey, who Nixon defeated by a razor-thin margin in the presidential election of 1968 and who was dying of cancer, calling Nixon to invite him to attend his public funeral in Washington, D.C. “Dick,” Humphrey said, “I’m not going to be around much longer. There’s going to be a memorial service for me in the Capitol Rotunda. I want you to attend that service.”

Nixon attended the service along with President Carter and former President Ford. “It was an extraordinary moment,” writes Pipes, “unthinkable only a few days before. Here was Nixon at the U.S. Capitol honoring a former rival—and except for the protestors at the airport, no one seemed to object.”

Reflecting back on Watergate’s aftermath, Nixon had written: “I had to decide what to do with the rest of my life. In a sense, this was a life-or-death decision. If a person quits after a defeat, he dies spiritually and will soon die physically.”

Nixon did not quit, he endured. He moved to New York City and later to Saddle River, New Jersey, and planned his comeback. His goal was to “use his voice and his mind to be involved in public affairs again.” For nearly two decades he achieved that goal.

Nixon soon emerged as a critic of President Carter’s foreign policy. In 1980, he wrote The Real War, a geopolitical tour de force that caught the eyes of Republican presidential candidate Ronald Reagan and members of his foreign policy team. Nixon deliberately timed the book to coincide with the 1980 election, and he provided political advice to Reagan and his campaign team.

Soon the “discredited” former president was making speeches and writing articles in of all places the Washington Post, the newspaper that led the charge to uncover the misdeeds of Watergate and impeach Nixon.

Pipes recounts the gradual process by which through the sheer force of his intellect, Richard Nixon became relevant again to the debates about America’s proper role in the world. He wrote more books, mostly on foreign policy, to widespread acclaim. He gave more speeches. He wrote op-ed pieces. And he counseled presidents. He became a “wise man” of foreign policy, an elder statesman.

He also traveled—to Russia and China and other places of importance—and when he returned America’s leaders sought his perspective and often listened to and acted upon his advice.

Sometimes Pipes exaggerates Nixon’s influence. He credits Nixon with guiding Reagan to reach agreements that led to the end of the Cold War, but it is clear that Reagan needed no such guidance. Pipes also credits Nixon with preventing a crisis in U.S.-Chinese relations over Tiananmen Square, but President George H. W. Bush would not have broken relations with China in any event.

The last president Nixon advised was Bill Clinton. Pipes notes that Clinton consulted with Nixon on Russia, China, and Bosnia. Clinton met personally with Nixon in the White House in March 1993, and after the meeting Clinton remarked that the meeting was “the best I have had since I was president.”

Nixon died on April 22, 1994. His wife Pat had died the year before. Before his death, he had completed one last foreign policy book, Beyond Peace, which presciently envisioned a 21st century world framed by U.S.-China relations.

At Nixon’s funeral, President Clinton said that what impressed him most about Nixon was that, “As a public man, he always seemed to believe the greatest sin was remaining passive in the face of challenges, and he never stopped living by that creed. He gave of himself with intelligence and energy and devotion to duty, and his entire county owes him a debt of gratitude for that service.”

Nixon’s post-presidential years epitomized the importance of perseverance in life. “Nixon prevailed,” Pipes writes, “because he refused to fail . . . Like a ship at sea amid stormy waters and stiff winds, he followed his compass and found his way back to the harbor.” Nixon was “a man who never stopped thinking, writing, and influencing from the dawn of his exile to the dusk of his life.”