After Cooling: On Freon, Global Warming, and the Terrible Cost of Comfort 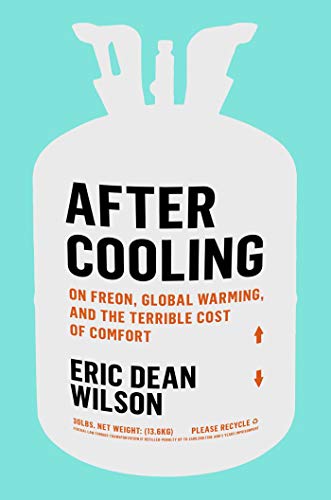 “Well-written, unexpectedly engaging, and perhaps a bit overlong, After Cooling is a knockout debut by a gifted writer.”

Manufacture of the refrigerant called Freon was banned in 1980. Once hailed as a cooling godsend, Freon’s use had helped punch a hole in the earth’s protective ozone layer, visible each fall in the Antarctica skies. As Eric Dean Wilson notes in his ambitious After Cooling, the dangerous gaseous chemical has since been replaced by other, safer cooling agents, which nonetheless have a toxic environmental effect when released into the air.

The author hangs a fascinating, troubling story—several, actually—on the history of Freon. The coolant, once essential to the operation of air conditioners, refrigerators, and other common devices, can no longer be produced in the U.S. but is available, at a price. The resulting black market for the “shitload” of stockpiled Freon is the target of hunters like “Sam,” a green energy worker, writes Wilson.

Weaving his way through these pages with the author in tow, Sam travels to auto shops and other locales, mainly in the South, where a mix of good old boys sell him canisters of Freon. Sam, never disclosing his purpose, brings the air-tight containers to destruction plants in Ohio and Arkansas, where the potent gas they contain is turned into salt water.

The destruction of Freon generates carbon offset credits under California’s emissions trading program. California businesses buy the credits, which allow them to pollute beyond their state limit.

So much for Freon’s continuing on-the-ground story.

The author, a poet and essayist who teaches climate-related writing at New York’s Queens College, has far broader narratives in store. A major one focuses on human comfort, and our destructive, unthinking acceptance of it since the invention of air conditioning, at the expense of the planet and other humans. Once, we sat on porches, or fled to summer homes or urban rooftops, to stay cool in summer heat. Now we close ourselves inside, cool, paranoid about the world out there, and increasingly disconnected from others.

“Even when released, refrigerants are vaporous, intangible; ghosts in the machine that cool our cars, our rooms, or fridges. They underwrite a certain standard of comfort—a peculiar idea of the good life—that we rarely think about critically until that standard breaks down. Then the room becomes sweltering. The popsicles melt. The meat rots.”

Wilson describes this phenomenon in detail, so that we see how much our obsession with cooling comfort has affected our home and office lives. Most Americans did not want air conditioning in the 1850s, he notes. They thought it “strange.” In fact, “not until the development of the mid-twentieth-century U.S. suburban way of life did many people want or expect a consistently cool temperature throughout the summer.”

He takes a deep dive into the lives and work of AC’s inventors. Alfred Wolff, for example, in 1899 built a cooling system in the cadaver room of Manhattan’s Cornell Medical College. It kept bodies from decomposing. The same room was used for Cornell’s summer graduation ceremonies. Several years later, Wolff led efforts to cool the floor of the New York Stock Exchange.

Haviland Carrier, the research engineer behind Carrier Engineering Corporation, developed a machine that mastered the precise control of humidity. Another inventor, Stuart Cramer (he coined the term “air-conditioning”) improved the air in his Southern textile mills by increasing the humidity to prevent dry cotton threads from breaking.

When Freon was brought to market by DuPont in 1930, it was deemed “totally safe,” another blessing, said the firm, of “a future made more efficient by science.” The product entered DuPont’s “long record of denying the danger of its products,” writes Wilson, who deems ozone depletion “the latest manifestation of the ongoing process of Western capitalist industrial violence.”

The author’s comprehensive account manages to cover everything from race and climate to controversies over air quality in schools to how A/C made the South “less southern.” He urges readers to be mindful and “notice our terrible responsibility to one another” when we push the “on” buttons of cooling devices.

Well-written, unexpectedly engaging, and perhaps a bit overlong, After Cooling is a knockout debut by a gifted writer.