After the Circus: A Novel (The Margellos World Republic of Letters) 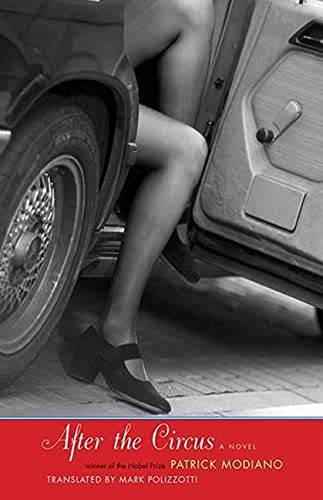 With age usually comes wisdom, and when waxing nostalgic, one usually sees the significance of youthful events in a new and understanding light. However, for our protagonist in Patrick Modiano’s new novel, After the Circus, it appears that even the passage of time has left him confused about the time when he was just reaching adulthood, alone in Paris.

Modiano’s writing is minimal in the extreme: He doesn’t share pages of descriptions of landscape or weather or clothing styles or significant architecture of the city of lights. Even night and day are hardly distinguished. The main character Jean is hardly described at all in terms of appearance or mannerisms. His new companion, Gisele, is noted tangibly only by the mention of her raincoat and skirt and sweater. Beyond that, nearly every supporting character is without distinguishing marks.

Perhaps the minimalism is to focus on the story’s plot, which also is quite minimal. A tight story arc gives the novel its focus, and it’s entirely intentional. Modiano’s lack of specificity creates a fog or haze over the city of Paris as its characters move and act below. And writing as he does from the viewpoint of an older man looking back, the lapses in memory (from choice or age) are entirely appropriate.

While lacking much description, he does give the novel a mood. A sense of foreboding that is at odds with the simplicity of many early scenes. The mood pervades, however, as day and night and meal after meal in nameless restaurants demonstrates the couple’s idle and unfocused path. Dark streets are traversed repeatedly, lending a sort of symbolism to their future.

Of note is Modiano’s little trick for springing unexpected revelations on the reader. For example, on their first night together, Jean roles over in the bed that the reader was led to believe they shared platonically. He realizes she is nude beneath her raincoat. And the story proceeds. As a reader, the reaction is, “Wait! What was that? Were they intimate and thus she was nude? Did she remove her clothes to sleep? Or, (more significantly) had she been nude underneath her raincoat all day long? During the police questioning?” It’s a small detail that impacts the story a great deal, and Modiano doesn’t feel obligated to explain.

The plot itself is simple: a young man, newly freed from parental control is living temporarily on his own (with an oft-missing caretaker) after his parents move to Switzerland. He’s under age and bored. We first meet him being questioned by the police because his name was found in an address book in question. He has no answers for their ambiguous questions. After he leaves, a woman enters and is similarly questioned, but out of his earshot. When she leaves, he meets up with her at a café, and after she asks the dangerous question, “Will you do me a favor?” they somehow become inseparable, based on their shared police experience and nothing more.

She’s slightly older but appears years wiser and often takes notice of his naiveté with merely a look or a long pause. Silent mostly, they spend the next few days sharing his old apartment, walking the dog, and eating out quietly. Their conversations are minimal and one can’t help but wonder where their attraction lies.

Soon, she introduces him to some friends, older businessmen, and Jean admires the attention they show him. He feels they are benevolent and ready to assist his exciting new future. Jean’s sense of self-absorption is noticeable, perhaps from his sheltered youth, convincing him everyone is looking out for his best interests.

Again, the reader feels exasperation, wanting him to realize more has to be going on around him. Older Jean, looking back, expresses this: “If I could go back in time and return to that room, I would change the bulb. But in brighter light, the whole thing might well dissolve.”

Gisele shields him from any ugliness (often leaving him in the car with the dog), and now in love, they decide to move to Rome after one last favor for her friends. So kind her friends are! They’ve provided them with cash for the move and even that car! Again, just for a brief favor. Jean only begins to sense, as they pack for Rome, that something may be amiss. It’d be a good time for his parents to advise him, yet they’re gone. The question then jars the reader: Why exactly did his parents move in the first place?

Time is a tricky player in this novel: Jean lives and makes decisions in present time, his older self is observing backward in memory, and then older Jean actually returns to the places and haunts that clouded his mind so many years ago. Clarity is never fully attained, lost in that same fog and mist that romanticized Paris and served to confuse young Jean years before.