After Appomattox: Military Occupation and the Ends of War 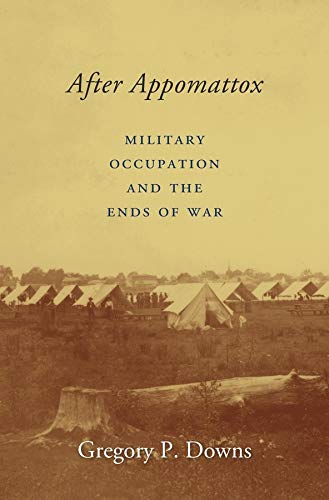 One standard for a good book is that it could be a reference for other good books. If the first pages of this work, for example, had been the beginning of a political biography of Abraham Lincoln, it would have been a serious contender for the prestigious annual award for the best new book on Lincoln. It has the makings of many scholarly works.

Many books have been written on the months and even the years following the surrenders of the Confederate armies, but Gregory P. Downs in After Appomattox tells the story of the end of slavery, Reconstruction politics, and so much more through the broad history of the occupation of the former Confederate states by the United States Army.

It is a history not so much of losing the “peace” after the war of 1861–1865 as much as of never having found it. The author explains the argument that the army was a foreign occupation force in a campaign of colonization that gave the Confederate States of America legitimacy as a real nation after death that it had at no other time. The still not reunited United States was, Downs writes, “a nation drifting toward peace, a region still at war.”

The United States of America, with the end of the official fighting, found itself in a political, economic, and social metaphorical house of mirrors in which one could see any distortion of reality but not the truth. The southern armies surrendered but the South’s government disappeared without making any peace settlement. Many people believed that the country would simply turn back the clock to before 1860. Abraham Lincoln was not unsympathetic to that idea, except with regards to slavery, although his successor Andrew Johnson of Tennessee would have continued black bondage or at the least established some form of American apartheid. William T. Sherman drew widespread criticism for attempting to simply restore the state and local governments, as well as the citizenry, as if the war never happened.

Disbanding the military, restoring the southern states, the war powers of congress/the president, enfranchisement of blacks (and of women), violence against blacks/white loyalists, punishment instead of reward for the defeated southern states, and future dominance by the Republican Party are all discussed in this work. The book even describes Republican fears in a country where African Americans now counted as whole people for representation but where only whites voted and voted Democrat. It is written in a highly readable style that never patronizes the reader and never compromises by giving in to the traditional populist public history of these events and issues.

In some ways, Reconstruction was more of a challenge to America’s military than the Civil War. The army spread across the South to restore order, as the author writes, “yet no one could have predicted how long it would actually take to end the war.”

At the same time, however, a bankrupt federal government was already sending the troops home. By the end of 1865, the size of the army had been drastically reduced by demobilization and desertion, even as it also had to protect the new freedmen, fight a widespread war with the western Indians, and prepare for a potential war with the French puppet government in Mexico. The Freedman’s Bureau was still organizing and still dependent upon the army for staff.

Downs argues that the army did a remarkably successful job in the former Confederate states considering its limited resources and the widespread violence.  The results could have been much worse, especially if President Andrew Johnson had gotten his way. The author writes that “to judge Reconstruction as weak is therefore to judge it anachronistically, against standards of occupation that would not be clearly developed for another eighty years.”

President Johnson too often gets relatively minor mention in American history, but this author never lets public memory off easy. He frames Reconstruction almost wholly under the Johnson administration. At no other time in the nation’s history did the military act with such disregard of the national civilian government, much to the concern of many Americans. A divided Congress and Republican Party had to act to try to protect the rights of African Americans, the only good to come out of the war beyond preserving the Union. Downs makes even the impeachment of Johnson appear as a defensive act by Congress.

Ironically the government used the expansion of military power under the 1850 Fugitive Slave law—a provision intended to allow the army to join local authorities in subduing gangs of escaped slaves and suppressing slave revolts—to allow the army to protect freed slaves from violence that often was perpetuated by the local white authorities.

From 1865 to 1876 the number of blacks murdered by whites in the South reached in the thousands. The army had to try to stop the violence but also the numbers of black refugees fleeing to the military controlled cities to escape the reintroduction of slavery in the countryside. Some observers saw only the choice of abandonment of African Americans or “a permanent colonization [of the South] that would place armed white Northerners within reach of many freed people.”

As the election of 1868 neared, Democrats actually called for using what remained of the declining numbers of soldiers in the South to help a restored white power structure to repress blacks. The Republicans wanted to use the army to finally force peace (i.e. a real end to the war) with honor. The presence of the army allowed for the very elections that eventually brought back in the white Democrat dominance that, with the help of Supreme Court decisions from 1875 to 1898, disenfranchised African Americans and imposed the infamously racist Jim Crow laws.

This dark period in American history has relevance, as the author points out in the last chapter. We still try to engage in nation-building in places where hearts and minds will not be changed. The beginning of the modern Civil Rights era was marked by the United States army enforcing integration in the 1950s.

Downs does not go so far, however, as to say that racism, resistance to federal authority, and claims of state’s rights remain viable political tools in today’s “New South.” Mississippi, for example, did not finally approve the Thirteenth Amendment ending slavery until 1995 (officially not until 2013). Reconstruction, the author writes, “reminds us that government, despite its many sins, remains the only instrument that can make our freedom real.”

Seemingly every page of this work teaches something new and important about this period, such as the history of Tunis Campbell and his near independent black state in Georgia, and Lincoln's four shadow state governments. The author, however, made the leadership of United States army in the spring of 1865 appear paranoid.

At that time, however, federal arsenals were blowing up from Mobile to Massachusetts at the same time that there were suspicious railroad and steamboat “accidents” and many other incidents. A coordinated attempt to kill all three of the persons in line to be president of the United States had just occurred. Fear may have proven to have been unjustified but did not appear so in the press at that time.

This book will not get accolades for its illustrations. Quality time spent at the Library of Congress, at least online, and elsewhere could have created a visual experience to equal this achievement in writing and scholarship, the latest in a number of important works coming out from Harvard University Press.