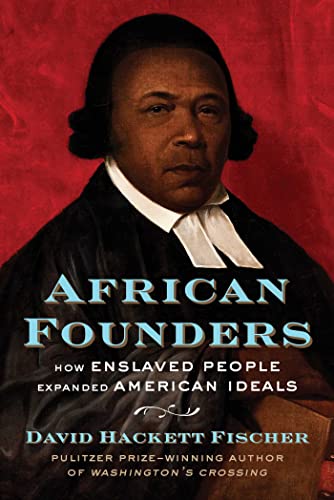 “African Founders is a Promethean work, a truly magisterial and magnificent book of cultural history that extracts from potentially dry demographic data a riveting story that . . . transcends all our current historiographical debates of slavery.”

In 1751 Benjamin Franklin was a white supremacist and racist. By the time of the American Revolution Franklin was writing against slavery (even as he continued to practice it). Franklin himself relates how African schoolchildren in Philadelphia taught him a lesson about race and changed his mind. Schools for Black children had success, and Franklin’s pivotal event was when he visited William Sturgeon's Philadelphia “Negro school” in 1763. He wrote “I was on the whole much pleased, and from what I then saw, have conceived a higher opinion of the natural capacities of the black race, than I had ever before entertained. Their apprehension seems as quick their memory is strong and their ability to learn in every respect equal to that of white children.” Franklin saw the light and he changed.

This story is just one of hundreds, many eye-popping, in David Hackett Fischer’s new book exploring how African slaves are as much founders of America as are the iconic and familiar figures of her Founding Fathers.

David Hackett Fischer, University Professor and Warren Professor of History emeritus at Brandeis University, the Pulitzer Prize-winning historian of such classics as Washington’s Crossing, Paul Revere's Ride, Albion’s Seed (for which the present book is a kind of sequel), The Great Wave: Price Revolutions and the Rhythm of History, and Historians Fallacy's: Toward a Logic of Historical Thought has now added to his oeuvre yet another magisterial tome on American history.

For many years there has been a perspective on American slavery by the public that one could describe as either the Pollyanna view or the lachrymose view. Fischer shows us the story is far more complex and, frankly, far more fascinating.

Fischer lays the groundwork for his study by reminding the reader that six generations of American scholars were mostly Whig historians of their nation, that is, they studied the ideas of liberty and freedom, equal rights, and republican self-government. Major themes were the triumph of those ideas and institutions over tyranny and slavery.

By the 20th and early 21st centuries American historians began to turn their research and attention to American slavery, racism, inequality, injustice, and corruption. In this spirit Fischer takes yet another approach. Rather than start with predominantly positive or negative judgments about the main lines of American history, he starts with a different set of ethical assumptions. One is that slavery, racism, and racial oppression in many forms have long been great and persistent evils in America and the world. Another is that vibrant traditions of freedom and liberty and the rule of law have long continued to be sources of enduring strength, especially in the United States, most of all in our own time.

Fischer’s book is an inquiry into what happened when Africans and Europeans came to North America, and the growth of race slavery collided with the ideas of freedom and liberty and rule of law. Like the ophthalmologist’s phoropter, Fischer, through prodigious research, proceeds to reveal a world that is clearer, more precise, richer, and revealing.

The book’s parts and chapters are divided by regions and a list of subject headings alone will give the reader a taste of the depth and richness of Fischer’s study, and at each step a desire to learn more: Transatlantic Slave Trade Database (a fabulous source); survival of African customs in New England; New Netherlands African slaves: the Angola-Congo wave of 1626 to 1654; literacy as a tool of resistance; Afro loyalist: Sergeant Thomas Peters, “the George Washington of Sierra Leone;” freedom by self-liberation; New York African American oyster men; Anthony Benezet and the Mandinka people; explosions of racial violence in the Philadelphia, 1805–44; African reform leaders: Robert Purvis and Harriet Forten Purvis; African clusters in Chesapeake subregions: Igbos, Ibos, and Ibibios from Biafra in the lower Tidewater and eastern Piedmont; Madison Washington, 1841: a Chesapeake leader of the most successful slave revolt in American history; Virginia born slave leaders against slavery: Dred Scott and Harriet Robinson Scott; relations between masters and slaves in the lowcountry; Gullah and Geechee religion: ring shouts as a vital tradition; Black Seminoles; Negro Cowboys.

African Founders is a Promethean work, a truly magisterial and magnificent book of cultural history that extracts from potentially dry demographic data a riveting story that, in the words of another Pulitzer Prize winning historian, Gordon S. Wood, transcends all our current historiographical debates of slavery. African Founders reframes both the story and debate about slavery in America and elucidates how one does not get lost in details, but how details illuminate everything. Nowhere in the book is the phrase “critical race theory” mentioned, but without a doubt Fischer’s book thoroughly supports the idea that no one can ignore the overwhelming evidence that racism and systemic racism play a major role in the foundation of the American polity and how Americans must examine the intersection of race, society, and law.