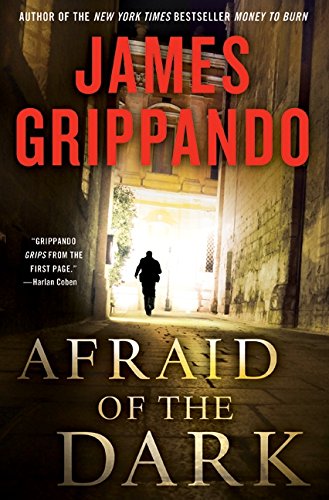 Afraid of the Dark is the ninth novel in the Jack Swyteck series, by New York Times bestselling author, James Grippando.

Computer genius and data mining magnate Chuck Mays is going out of town. His daughter, McKenna, just broke up with her boyfriend, Jamal Wakefield. Jamal is also a computer genius. He dropped out of school at age 16 to go to work for Mays. Jamal, now 19, dates McKenna, age 16. This gives the impression that they’re a pretty close-knit bunch.

A couple of days ago though, McKenna and Jamal broke up. For reasons unknown, McKenna’s mom, Shada, is convinced that Jamal will do McKenna bodily harm. Like any caring parent, Chuck loads up McKenna’s cell phone with spyware and GPS tracking. He asks his friend, police Sergeant Vince Paulo, to monitor McKenna’s communications and activities while Chuck is away.

Gulf War veteran come hostage negotiator, Vince, is grudgingly admired by his colleagues for his risk taking—he’s got that Mel Gibson/Bruce Willis thing going on—and for his ability to “think out of the box.” All is well until he lets his guard down to get a cup of “joe.”

A digression. Please, let there be an industry decree that no protagonist any longer be allowed to “think out of the box.” The number of thriller protagonists who owe their success and the admiration of their colleagues to their ability to “think out of the box” now number in the thousands. Surely there must be one or two other ways to suggest that a character has a creative mind. Likewise, no character should ever again be allowed to drink “joe.” If I walked into Starbucks and asked for “a cuppa joe,” the server would look at me like I’m an idiot. It sounds stupid in fiction, too.

Vince checks McKenna’s text messages. One, sent to Jamal, reads, “FMLTWIA,” which Mr. Grippando tells us in “sexting” speak, means “Fuck me like the whore I am.” Vince rushes to the rescue, but too late. He breaks down the front door to find McKenna bleeding out from multiple stab wounds. She dies in Vince’s arms, and with her last breath, names Jamal as her killer. Vince hears movement. The killer is still present. Vince opens the garage door and an explosion rocks him. He lives, but is blinded by the blast.

Three years later, Jack Swytech is asked by a friend and ACLU lawyer to consider taking the case of prisoner 977, who has spent the past three years in Guantanamo Bay. In all that time, he’s never spoken a word. 977, coincidence of coincidences, turns out to be Jamal Wakefield. Jamal opens up to Jack. He didn’t kill McKenna, he wasn’t even in the U.S. He had been kidnapped, taken to a secret CIA detention facility, and tortured in Prague. They wanted his data mining secrets. They eventually just dumped him in the street.

Jamal called his mom (a good boy, he had always called her every day), and she told him not to come home, he would be hung out to dry for murder. Instead, he went to Somalia, assumed a new name, and spent the next three years with his father, who just happened to be a Somali warlord and al Qaeda leader. He got caught up in a sweep of al Qaeda members, went to Gitmo, and endured all manner of torture and deprivation. He chose it over facing a trial for a murder he didn’t commit, because for some inexplicable reason he assumed he would sooner or later be released. Why he did all this on the basis of a telephone conversation with his mom, rather than go immediately to the U.S. embassy in Prague, surrender himself and tell the truth remains a mystery.

Swytech, naturally enough, is friends with both Chuck Mays and Vince Paulo, and so of course he agonizes over his decision to take Jamal on as a client, even though his story sounds like hokum, but Jamal somehow convinces Jack. And again naturally enough, Jack’s girlfriend is an undercover investigator for the FBI. And the antagonist, who calls himself The Dark, is so evil that I believe he is actually Cain, still walking the earth since being cursed by God.

The author is asking a great deal of us to suspend disbelief in this tale. After a couple hundred pages and forgetting incredulity, it starts to pull together and feel like a good read. After 300 pages and story immersion, it’s enjoyable. The ending . . . well, it pulls the story strands together and works. It satisfies to a reasonable degree without surprising. With more planning and forethought, this could have been a topnotch thriller.