The Affirmative Action Puzzle: A Living History from Reconstruction to Today 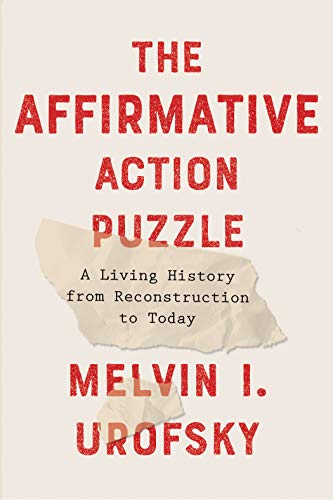 “The Affirmative Action Puzzle unpacks decades of legal history with extraordinary insight and vigor and proves essential reading for anyone hoping to make sense of the most critical legal, cultural, and public policy issues of our time.”

Proponents of what legal historian Melvin I. Urofsky in his definitive new study, The Affirmative Action Puzzle, terms “soft” affirmative action—removing barriers to equal opportunity in jobs and education without a mandate for delivering equal results—would argue that you can’t fight discrimination with discrimination.

Without question, most manifestations of “hard,” results-oriented affirmative action as a remedy for historic and present inequality or insufficient diversity are anathema to many Americans, raising the specter of racial quota systems once used to cap the number of Jews admitted to elite universities. Urofsky himself acknowledges discomfort with the baldest numbers-based “hard” affirmative action strategies that he discusses in his book.

But if the complex and messy history of public- and private-sector efforts to remedy the myriad injustices of racial exclusion teaches us anything, it’s that “soft” affirmative action, however clean and comforting, doesn’t get the job done.

If all corporations, universities, labor unions, government agencies, and government contractors had voluntarily and successfully acted in accord with the spirit of Lyndon Johnson’s landmark 1965 commencement address at Howard University, “To Fulfill These Rights,” in which the president presented a bold vision for what would come to be known as affirmative action, Urofsky concedes, “there would have been no need for the book you are reading. There would have been fewer court cases, far fewer federal rules regarding goals and quotas, no break between former civil rights allies, and no political campaigns built on opposition to affirmative action.”

But “it didn’t happen that way,” Urofsky explains, because the multifaceted problems affirmative action sought to remedy were far more dire than historian Herman Belz and economist Thomas Sowell chose to recognize in their influential diatribes against it. “The most formidable barriers to black access to jobs consisted of habitual employer preference for white workers and unthinking assumptions bred by decades of exclusion,” Urofsky writes. “This statement, however, needs to be tempered by the realities of African Americans with limited education and skills, conditions that had been created by decades of bias and discrimination.”

Beginning his study decades before Johnson’s Howard commencement address, Urofsky tracks the growth of unions in the 19th and 20th centuries as largely segregated organizations barring blacks from membership in some cases and advancement in others, and the explosion of New Deal social welfare initiatives in the 1930s that did little to remedy economic inequalities between whites and blacks. Urofsky describes the 1944 GI Bill—whose benefits for education, job training, and housing famously ushered a generation of Americans into the middle class, but proved vastly more accessible to white veterans than blacks—as “arguably the most massive affirmative action program in U.S. history.”

In doing so, he echoes the assertions of historian Ira Katznelson in his groundbreaking When Affirmative Action Was White (2005). As both Urofsky and Katznelson maintain, thanks to the GI Bill, government-sponsored assistance programs benefiting favored and protected groups of citizens were familiar to all Americans in 1961 when John F. Kennedy issued the Executive Order that established the Equal Employment Opportunity Commission (EEOC). Executive Order 10925 simply marked the first time that African Americans had been invited to join whites as another favored group.

Affirmative action for both minorities and women, in Urofsky’s telling, faced an uphill battle from the get-go, partly because of the intricacies of the inequalities it confronted, and partly because its mandate seemed to fly in the face of the spirit of the civil rights movement up to that point.

At the movement’s symbolic peak, the August 28, 1963, March on Washington for Jobs and Freedom, SNCC Chairman John Lewis predicted in the day’s most controversial speech that the civil rights bill—still nearly a year away from passage—was already “too little, too late.”

Shortly after the law passed, some of the same activists and policymakers who had fought for it began to insist that its critical Title VII—which prohibited employers, government agencies, unions, universities, etc. from discriminating on the basis of race, sex, color, national origin, or religion—might not only prove insufficient to reverse centuries of racist discrimination, but a potential hurdle in and of itself to any effective initiative to set things right.

On this point Urofsky quotes legal historian Richard Epstein: “The ink was scarcely dry on the Civil Rights Act of 1964 when a very different set of goals and objectives came to dominate the civil rights movement: affirmative action for protected groups.”

Indeed, in the pivotal affirmative action court cases that have challenged various remedial strategies over the last half-century—all well documented and expertly contextualized in The Affirmative Action Puzzle—both Title VII and the equal protection clause of the Fourteenth Amendment have been repeatedly invoked to protect white Americans against the onslaught of African American advancement.

Legal scholar Adam Winkler explains this irony well in We the Corporations (2018): “Stricter judicial review of laws burdening minorities was grounded in political power: minority groups were easily victimized by the majority. Yet in the affirmative action cases, the justices abandoned that rationale, giving special judicial protection to the white majority. It was another example of reform adopted to help the powerless that was exploited and transformed by corporations to benefit the powerful.”

Like We the Corporations, The Affirmative Action Puzzle unpacks decades of legal history with extraordinary insight and vigor and proves essential reading for anyone hoping to make sense of the most critical legal, cultural, and public policy issues of our time. While Winkler’s excellent study of the evolution of American corporate law since colonial days considerably deepens and complicates our popular understanding of perplexing legal notions like “money is speech” and “corporations are people,” The Affirmative Action Puzzle does much to explain the raging white racial resentment that arguably vaulted Donald Trump into the presidency. It also dissects the legal conundrum of the ongoing Harvard discrimination case that threatens to turn our evolved understanding of race-conscious college admissions and meritocratic fairness on its ear.

Urofsky, as one might expect, devotes considerably more time to momentous affirmative action cases than Winkler, and arguably presents a more nuanced view of those cases. Of particular interest is how these cases help us understand the drift and realignment of the Supreme Court over time, and the ways the relevant views of the justices—particularly Reagan appointees Sandra Day O’Connor and Anthony Kennedy—evolved in their years on the court, and how that evolution influenced key decisions.

Likewise, Urofsky reveals some of the surprising ways aggressively anti-affirmative action presidential administrations like those of Ronald Reagan and George H. W. Bush proved not nearly as effective in torpedoing affirmative action policy as they intended, and how the ideological groundwork established under John F. Kennedy and Lyndon Johnson only led to concrete gains during the presidency of Richard Nixon.

Urofsky delves deeply into the battles over affirmative action in public and private university admissions and hiring, assessing subtle shades of meaning in Supreme Court (and lower court) opinions and dissents in DeFunis (1974), Bakke (1978), the battle over California’s Prop. 209, and the ongoing Harvard case. No legal historian has argued more convincingly for the historical impact of landmark dissents in our ongoing constitutional dialogue than Urofsky in his 2015 masterwork Dissent and the Supreme Court.

He also discusses the evolution of the goals of affirmative action from righting past wrongs to achieving present-day diversity, and charts some of its unintended consequences: namely, the suspicion that minorities and women in the student body and faculties of elite universities are affirmative action admits or hires—that their presence on campus has resulted from preferential treatment—and the frequent labeling of minority women as “twofers.” (As if every white Christian man who ever gained admission to Harvard or made partner at a law firm that had his father’s name on the door did so through merit alone.)

Urofsky examines several fascinating issues that have influenced the debate over affirmative action, such as its devastating impact on the alliance of blacks and Jews that contributed so much to the civil rights movement of the 1960s. As the primary victims of old discriminatory admissions quotas in elite American universities, and the most visible beneficiaries of the differently flawed testing-based, “meritocratic” system, Jews generally had no issue with “soft” affirmative action. But they helped lead the charge against its more contentious, quota-like “hard” counterpart. Urofsky’s chapter on blacks and Jews begins with a jarring epigraph from a Jewish woman in Canarsie, Brooklyn on how “giveaway programs” for blacks transformed her: “So you want to know how I became a bigot?”

The book draws to a close with a poignant discussion of how anti-affirmative action white-lash fueled the overtly racist presidential campaign of Donald Trump in 2016 and contributed enormously to his election. Trying to write real-time history of still-unfolding events is always perilous, and occasionally the closing chapter of The Affirmative Action Puzzle suffers from lack of access to the latest data (like Urofsky’s characterization of Trump’s base of support as not just predominantly white—true enough—but also as primarily working class, a notion more recently debunked).

But Urofsky’s overarching points about Trump’s appeal and its relationship to a half-century of conflict over affirmative action ring true: “It did not matter whether [Trump] could actually deliver on his promises. Some studies indicated that even when they recognized his lies, his supporters did not care. He was attacking the establishment that had taken away their status and had apparently made minorities and women more successful economically and important socially.”

Urofsky deftly compares the disproportionate white male reaction to modestly increased opportunities for minorities and women to a driver who concludes that he can’t find a parking space in a multilevel garage because a handful of unused spaces have been reserved for the handicapped. He also raises several valid issues concerning how successful affirmative action has been, not least among them this: If affirmative action has so thoroughly displaced white men with minorities and women in all the great jobs, where are all the minorities and women that have supposedly flooded the upper ranks of American employment?

Of course, the corollary to that question is, if affirmative action hasn’t rendered itself redundant by leveling the playing field after at least 50 years of trying—as Justice Sandra Day O’Connor, among other conditional supporters, argued that it would after a finite interval—has it been worth all the controversy it has engendered?

Urofsky—like most readers who reach the final pages of The Affirmative Action Puzzle—would argue that it has, and that its implementation, despite mixed results, has thankfully grown less ham-handed over time. But even affirmative action’s most enthusiastic advocates would agree that its work remains unfinished and its puzzle unsolved.