The Adventures Of Emily Finfeather: the Feathernail and Other Gifts 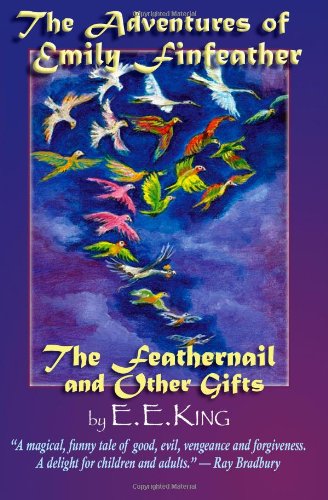 It takes a while for an author to find her place in the ever-expanding world of genres. This is especially true in the world of fiction for kids. E. E. King’s entry, The Adventures of Emily Finfeather, comes off of her wonderful inaugural adult fiction, Dirk Quigby’s Guide to the Afterlife.

This is the story of an eight-year old girl named Emily. Emily has had, and is still having, a hard time at life. She is teased mercilessly by the popular girls at school, her teacher thinks she is a trouble maker (though it is the popular girls who cause the trouble and blame Emily), and her grandmother is always angry and banishes Emily to her attic bedroom. And if that were not enough, the youngster is an orphan. Maybe.

During a school trip to the zoo, Emily faces the wrath of the popular girls, who lock her in the zoo’s aviary. After her great escape, she reenters the aviary with a plan to rescue all of the birds from their trapped and caged existence. It is with this great act of aviary heroism for which Emily is given the gift of entering other people’s dreams—with the added ability to manipulate those dreams; she is also given magic feathers that will grant her wishes. And this is where the story seems to break down.

It appears that Ms. King is seeking to accomplish two goals with this venture: language and morality. The first is an introduction to new vocabulary and is wonderfully done through the use of footnotes and definitions laced throughout the story. The story could use more of these definitions for as adult we tend to think that children are much smarter than the average. For example, where “exalted” is defined, “pandemonium” is not.

The footnotes provide their own fantasy tales. “Manipulate” has an elaborate short-short and amusing story defining the term.

“To manipulate someone is to trick or make them do something. The flying car manipulated the goose into accepting its proposal of marriage, by providing a nice, warm, dry leather seat on which to build her nest. He also played romantic goose love songs to her on his radio, what bird could resist?”

A bit goofy—but this is a book for tweens.

What Ms. King seems to miss is the morality story, a tale obvious from the beginning chapter. Mean is bad. Good is, well, good. Bullying is mean. Purposefully ignoring people is mean. The popular girls are mean. Emily’s grandmother is mean. Even her teacher, Ms. Fudidudi, is mean.

Where one would expect a change within the character’s moral code, Ms. King gives the reader little to go on. There is a hint of change when Emily comes to the rescue of a former popular girl, Thelma, as she becomes the object of the harassment usually reserved for Emily—or during a not fully explained change in Grandmother from anger to quasi-loving.

The story appears to take another negative turn, emphasizing retaliation as a “good” in the form of Emily’s “gift” of entering into and manipulating other’s dreams; becoming a shark to bite the hand of the leader of the popular girls, Dixie Yippet, who had teased her in school. The real “good” of the morality story does not seem to come about.

However, the style of writing and formatting is very much the E. E. King we came to know. Short chapters; from zero words (“Chapter 13—Is bound to be bad luck, so let’s just skip it.”), to three pages. Each holds a snappy theme and scene, and leads the reader through the maze of people, birds, a talking cat, and other people with magical “gifts.” Each provides a sequence of action that is easy for the young reader to follow.

The story does have its share of silliness. Emily’s teacher’s name is Ms. Fudidudi and the substitute teacher is lovely but evil Ms. Du’Plicity. Emily’s talking cat Merganser, though a possible moral pathfinder, is really more interested in catching mice and birds. A merganser, for those who do not know, is a fish eating duck—and is not defined in the book.

Yet we do not learn much about the characters. Ms. Du’Plicity is the villain in the story, wanting to take Emily’s magic feathers, but the reader never learns why. She just appears, masquerading as a sweet person who eventually turns on Emily. This leaves a gaping hole in the story frustrating the reader, young and old alike. It also leaves mistrust emanating from between the lines.

Finally, though Ms. King tried very hard to create a cliffhanger ending, it felt more like she hit a wall and just stopped. There is more to the story, but I do not think I want to find out.

Unfortunately, this may be a poor follow-up to a very good start. There are times when one should stick with a successful venue and improve on it rather than to venture into new realms of the writers’ kingdom. It is unfortunate that Dirk Quigby was killed off in the first book; the second would have been much better with him in it.