The Adventure of the Peculiar Protocols: Adapted from the Journals of John H. Watson, M.D. 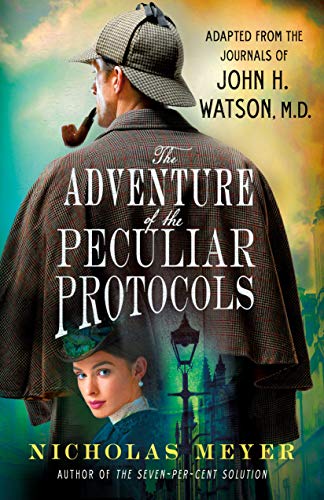 “Invigoratingly engaging from start to finish, Nicholas Meyer has yet again created a fresh take on an old genre.”

January 1905: famed detectives Sherlock Holmes and his associate Dr. Watson are summoned by Holmes' brother Mycroft to embark on a secret investigation. An agent of the British Secret Service has been found dead in the River Thames. In the agent’s pocket is a document that appears to be the notes of a meeting of a secret society that’s focused on taking over the world.

Based on real events, the adventure takes the fabled private detective’s and other captivating characters through the heart of Europe aboard the legendary Orient Express. As they travel from Paris into the heart of Russia, Holmes and Watson attempt to trace the origins of the dangerous document. Hot on their heels are men of dubious loyalty, who will stop at nothing to prevent the release of the secret plans.

The Adventure of the Peculiar Protocols is Nicholas Meyer’s third Sherlock Holmes novel and in this highly entertaining murder mystery we are whimsically transported back in time. Harkening back to the writings of Sir Arthur Conan Doyle and Agatha Christie, Meyer’s capably takes the reader on a gripping journey where Holmes and Watson exposes a secret so massive it shakes the duo to their core. An Academy Award nominated film writer, producer, and director. Nicolas Meyer’s is also the author of three Sherlock Holmes novels that include The Seven-Per-Cent Solution (1974), The West End Horror (1976), and The Canary Trainer (1995).

In this newest adaption we find Sherlock Holmes contemplating his future in the new century. The year is 1905 and there are fewer and fewer mysteries to solve. The aging detective finds himself at a crossroads with technological advances. Just before he and his distinguished partner John H. Watson, M.D. are set to retire, they find renewed propose as they are drawn into another exhilarating murder mystery.

At first the detectives are skeptical of the facts but as they wade deeper and deeper into the case it becomes crystal clear that the stakes are dire. Will Holmes and Watson be able to solve the mystery in time to prevent the secret organization from succeeding in their bid for global supremacy? It is set on the fabled Orient Express, which was made famous in the writing of Agatha Christie. Along the way, Holmes and Watson find themselves intertwined with several eccentric characters. As they contemplate the mystery that is currently unfolding they also ponder the changing world.

“A revolution was taking place half a world away. Events were unfolding that, if the nearsighted chemist enjoying Holmes’s sherry was correct, could conceivably drag the rest of Europe into a conflagration in which massive quantities of British gunpowder might well be required.”

Meyer’s expertise with Sherlock Holmes’ exploits are undeniably evident in this newest adaption. He effortlessly combines his screenwriting and storytelling skills into a fresh take on an old-fashioned murder mystery. While the exchanges between Holmes and Watson feel natural, Holmes’ side narrative of sibling rivalry with his older brother is undeniably entertaining.

“How is your French, Sherlock?” Holmes endeavored to conceal his surprise. “Schoolboy at best, as you are aware,” he confessed. Mycroft, I knew, spoke at least six languages, claiming it took but eight weeks to master a new tongue, which Holmes sneeringly once asserted in my presence was a sure sign of idiocy.” “It will have to do for now,” his brother replied, handing him the envelope.”

Invigoratingly engaging from start to finish, Nicholas Meyer has yet again created a fresh take on an old genre. The Adventure of the Peculiar Protocols is a sure bestseller in which 21st century readers are gloriously transported back to the adventures of Sherlock Holmes and Dr. Watson.