Adrift: A True Story of Tragedy on the Icy Atlantic and the One Who Lived to Tell about It 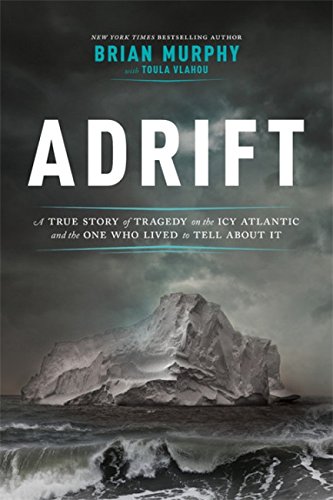 In medieval times, uncharted areas on maps were often marked “Here there be dragons,” but there are no records of what dragons may have been encountered, because there were no survivors to tell the stories.

In later years, maps of the northern Atlantic, southwest from Greenland and around the Grand Banks of Newfoundland, were marked “Iceberg Alley.” And 1856 was a particularly bad year for icebergs, as the crew and passengers of the John Rutledge discovered. This time there was a survivor to tell the story: Thomas Nye.

In Adrift:  A True Story of Tragedy on the Icy Atlantic and the One Who Lived to Tell About It, author Brian Murphy uses contemporaneous newspaper and journal accounts, archives, diaries, and the ship’s log, but more especially Nye’s personal journal, to portray the terror and suffering brought about by the John Rutledge’s collision with a giant iceberg and the personal hell  of 13 who survived the sinking of the ship only to be set adrift for nine days in an open lifeboat on icy and storm-tossed seas. Only one, Nye, would survive.

The John Rutledge was a packet ship owned by the shipping line Howland & Ridgeway, a partnership between Williams Howland and New York moneyman James Lawrence Ridgeway. As Murphy describes them, packet ships were the “shuttles of the day,” with fixed dates for sailing, which allowed merchants and passengers to schedule shipping of goods and personal travel. It calls to this Texan’s mind the shuttles on Southwest Airlines between Dallas and Houston.

On January 16, 1856, the John Rutledge set sail from Liverpool, England, with Captain Alexander Kelley at the helm, commanding his first transatlantic circuit aboard the ship. In addition to cargo, the John Rutledge also carried more than 100 emigrants, many of them still struggling to regain their footing after Ireland’s potato famine of the late 1840s and hoping to establish new lives in the United States.

Among the crew was seaman Thomas Nye from a prominent New England seafaring family. In fact, his uncle Ezra once captained the steamship Pacific and, a few years earlier, had rescued passengers and crew of a British ship on the verge of sinking as a result of a storm.

Five weeks after leaving Liverpool, the John Rutledge struck a massive iceberg in Iceberg Alley and quickly took on water. With the pacing and rising tension of a good thriller, author Murphy recounts the growing realization that the ship was going down and a panicked rush to lifeboats.

Five boats were launched, four of which rowed off into a thick bank of fog, never to be seen again. The fifth, which contained seaman Nye, the wife of the first mate, another crew member, and several emigrants and their minor children, began an ordeal that was to last for nine days.

As Murphy writes, “Every crisis exposes some truths,” and this crisis lived up to the maxim. One by one, survivors perished, and some of their bodies were tossed overboard. When finally spotted by the Germania, which had sailed from France shortly after the John Rutledge left Liverpool, the only survivor was a half-frozen Thomas Nye, who, fortunately for historians, had salvaged the ship’s logbook.

Author Murphy examines those nine days through the lens of Nye’s experience, exposing the truths of the crisis.  He almost makes readers feel as if they were passengers in the lifeboat, sharing not only scant food and water, but also participating in making life-saving, or life-threatening, decisions.

He writes that, in the midst of the crisis, “A critical bit of empathy seemed to shut down. It was clear that some were likely to die on this boat, and the most selfish among them perhaps had the best chance of cheating death.” And so, the tragedy was compounded.

In addition to telling the tale of what happened to the John Rutledge, Murphy also uses family archives and census records to personalize the passengers—emigrants seeking new lives in the United States—and skillfully weaves a story of heroism, delusion, and survival.

Adrift is well-written and well-researched, and offers a valuable analysis of a tragedy that is symbolic of hundreds of similar tragedies on the open seas. It also attempts to answer the question of why: Why would so many risk their lives in such an obviously dangerous enterprise?

Murphy encapsulates the seagoing mindset, which he calls “ancient and primal that ran right to the core,” this way: “The sea was their birthright. No dangers, no funerals would keep them from it.”