Admit This to No One: Collected Stories 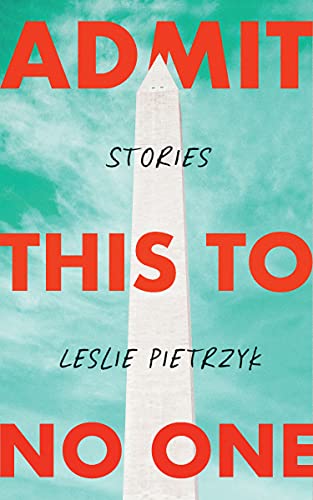 Many brilliant writers fly under the radar, insufficiently recognized for their superb mastery of the art of storytelling. One such is Leslie Pietrzyk, who, though honored by having received the prestigious Drue Heinz Award in fiction, should be more celebrated. Her newest and most sophisticated work to date is Admit This to No One, a dazzling collection of short stories.

In her prize-winning collection of short stories, This Angel on My Chest, Pietrzyk, created a patchwork quilt of inter-connected stories told from varying points of view and using many different techniques (including one story in list form) to create the picture of someone grieving over the loss of a loved one, in this case her husband who died suddenly at a very young age.

Pietrzyk’s newest stories are set in and around Washington, D.C. She employs varying points of view, sometimes first person and sometimes limited third-person omniscient, to develop a variety of characters, almost all of them closely related to or connected with “The Speaker,” and even the politician himself.

The first story, “Till Death Do Us Part,” reflects Pietrzyk at her best. The narrator is a 15 year old named Madison, the daughter of a Washington pinstriper. She’s at the Kennedy Center where her father is to meet her for dinner and a show. At first, Madison leads us to believe that her dad is pretentious, a womanizer, and a lousy parent. As the story progresses, we realize that Madison, though correct on several counts, may not be a reliable reporter, that she is hopelessly spoiled, and that her father, though badly flawed, is a more substantial figure than she would have had the reader believe; in fact, The Speaker of the House. All of which leads to a masterfully presented surprise ending.

Pietrzyk explores the psyches of her principal characters, three of whom are intimately connected to The Speaker. Two are his daughters: Lexie, conceived before The Speaker’s first marriage; and Madison, the product of a later marriage. The third is Mary-Grace, The Speaker’s long-time administrative assistant. Lexie, an artist, has been estranged from her father ever since he abruptly broke off relations with her mother and her. Madison is portrayed first as a spoiled, bratty teenager, later as a lost soul, drifting from one relationship to another. Mary-Grace is a capable woman who has subsumed her life to that of her boss, the man around whom the other characters orbit.

Other characters, including one of his young aides he seduces and wife number four, provide glimpses into the character of The Speaker.

Pietrzyk infuses her stories with a conversational, offhand use of language, an apt transcription of the way so many people actually think. There’s a bluntness to this style that helps draw the reader in because so many of us think in the same ways:

“It’s a low, muttery growl, though not low enough . . . Poor wife, hooked up with this steaming albatross turd.”

“He’s married, perpetually married, always with one wife or another.”

“A part of me stands back, always the observer, evaluating and assessing, aloof as my forty-year-old-tomorrow body responds and writhes, begs for more, begs for the end, gets what it wants.”

“Slapshot’s (the Washington Capitals’ mascot) grinning beak seems suddenly malevolently cruel—and definitely competitive, as if this bird is so over sullen teenage boys and their endless tugs of war.”

“I invited him to last night’s birthday party, damn it, knowing not to, knowing, knowing he wouldn’t show. Knowing that I’d be, looking for him.”

While Pietrzyk provides an incisive analysis of Washington, D.C. life—its political posturing, sexual excesses, greed, and underlying unhappiness—the reader comes to understand that such qualities are hardly unique to those who inhabit our nation’s capital, that DC is a microcosm of our society. One question she leaves us to ponder is whether we’re products of the environments we populate, or do we create the character of those environments?