Ada Lovelace and the Number-Crunching Machine 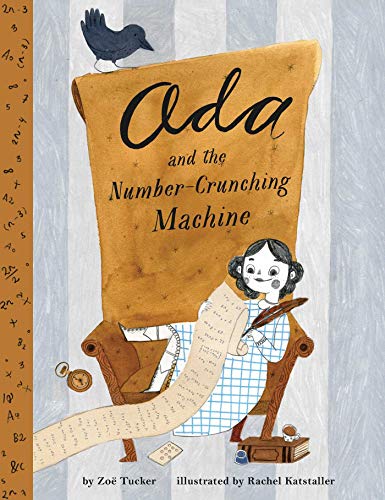 Ada Byron Lovelace, the 19th century woman who invented coding as a way of giving instructions to computers, is the subject of this picture book. The tone is light and breezy, geared to very young children. Ada's numerous accomplishments and impressive experiments (she tried to invent a flying machine as a young girl) are described vaguely, “Ada loved numbers and solving problems. Big problems, little problems, and tricky complicated problems. She read all the books in the library, solved big sums, and invented crazy contraptions.”

These kinds of generalities may seem more suitable to younger readers, but the summary shortchanges both Ada and picture book readers. We never see any of her inventions, never experience her hard work and determination. Keeping the tone light throughout, the final insult comes when the author, Zoe Tucker, reduces the collaboration between Charles Babbage, the mathematician, and Ada to a fun invention, short-changing Ada for her role in computer science. “Charles imagined a big machine with lots of moving parts. The machine would be fed with large cards, each punched through with a pattern of holes. These holes would tell the machine what to do.”

Yes, in fact, Charles Babbage built an “analytical engine,” a mechanical machine that was the first computer. He demonstrated to Ada how you could turn gears to input a math problem, and the machine would calculate the answer. It was Ada, not Charles, who figured out that the computer needed mathematical instructions to work. These instructions are now called “coding,” what Tucker refers to as punch cards. Charles may have built the first computer, but Ada wrote the first code, figuring out first that coding was necessary to fully utilize the computer. In Tucker's book, it sounds as if Charles figured out coding. Ada just happened to write the first one. This is misleading at best, inaccurate at worst.

Fortunately there are three much better picture books already out about Ada Byron Lovelace and her truly impressive achievements. All three have very different tones and illustration styles, but any one of them is far better than this book. For lavish illustrations and a clear, compelling story about Ada from young girl to computer programmer, try Ada Byron Lovelace & the Thinking Machine by Laurie Wallmark (herself a professor of computer science), illustrated by April Chu. For a similar story with more whimsical art, in a humorous Maira Kalman-like vein, try Ada Lovelace, Poet of Science: The First Computer Programmer by Diane Stanley, illustrated by Jessie Hartland. The writing is not quite as clear, but the cut-paper art is strong is Fiona Robinson's Ada's Ideas: The Story of Ada Lovelace, the World's First Computer Programmer. There is a wide choice of picture books out there about Ada and her singular achievement. Give this new one by Tucker a miss.