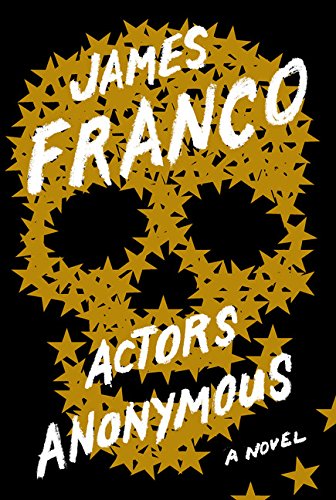 James Franco has a reputation as a risk taker. As an actor, he has appeared in major studio pictures like the Spider-Man trilogy and in art films such as Milk and Howl, the latter in which he portrayed the young Allen Ginsberg. He also, apparently just for the hell of it, took on a short stint on television’s General Hospital, dabbled in performance art, studied gender politics at Yale, worked through several doctoral programs all at once at NYU, and has written and directed for the stage.

The guy’s been around.

He is also a writer of sorts. After producing a collection of short stories, Palo Alto, he now has written what he refers to as a novel, Actors Anonymous. AA is meant to be an experimental thing, a redistribution of the attributes that together comprise what we think of as a novel, if not a sort of reinvention of the art form itself.

The conceit is simple enough. In what is more or less a second collection of short stories, the reader is introduced to various members of Actors Anonymous, a variant of the more essential AA, in which those whom Hollywood has chewed up and spit out have a place to gather and mourn and a philosophy upon which they can base their struggle for fame and artistic integrity.

Not that the organization—however needed—really exists. What we are given is a loose-limbed idea of what a 12-step program for show biz might be like and what wisdom it might have to offer its adherents.

“We admitted that life is a performance—that we are all performers, at all times—and that our ‘performance’ had left our control.”

That issue of control looms large. In many ways, it is the heart of the narrative—the things that people will do and avoid doing in order to attain a sense of control.

Thus we get characters like Mike who, although lacking in anything resembling compassion, volunteers for hospital work for which he is uniquely ill-suited:

“I worked with retards because it made me feel good. Actually I usually just worked with one of them, Miles. I didn’t like working with the others because they were too busted up. Most were missing their throats or pieces of their brains or their limbs so that they were just writhing things in messy sheets. They lay around and drooled out of deformed orifices and made disgusting wet noises that made no sense. It was stupid to talk to the ones that were that far gone. You could stand there and be a warm loving body for only so long. After a while you started to feel like a retard yourself.”

The volunteer program (called “CALove”) seems grotesque enough, but the fact that a fellow volunteer is a young blonde actress who once played a vampire on a television show is enough to bring the guy back week after week.

There’s also Sean, a former heroin addict and thief, who works at McDonald’s because no other restaurant will hire him. He works the drive-up order window on the late shift and has sex for money in the restroom after hours. He also practices his accents over the microphone while taking orders in order to keep his acting skills intact.

And there’s Harry, who played Tybalt in a sixth grade production of Romeo and Juliet in which he tried to actually kill Romeo during their sword fight. And Jerry, who wants so very much for Vance to think that he is more exciting, more sexually successful, and much more clever than he really is.

But most of all—no kidding—there is this character named “James Franco,” sometimes just called “The Actor,” who keeps appearing and appearing and who won’t go away. While, admittedly, he figures well in the book’s most successful piece, “The Spider-Man Journals,” for most of the book he, as author and character, more or less tortures the reader.

Especially in “Windsor Girl,” a Gordian Knot of a story, in which James Franco, the Writer, temporarily loses control of the narrative: “I’m just a stupid little girl who wants to be an actor. James wouldn’t want me writing this but I’ve taken over. I know I’m young, and everything I have to say is a cliché, but I also feel like I have a right, because he took my virginity.”

“Windsor Girl” is an experimental piece in which Franco the Writer shows us what Franco the Character (and by extension Franco the Actor and Franco the NYU Student Who Takes Multiple Doctoral Programs All at Once) is Really Like:

“After Starbucks, James didn’t call me. Later, when he was in my life, we would talk about that time, back when I was just getting to know him, and I would tell him how upset I had been then, but how I felt like I couldn’t be because what could I have expected? He was James Franco and I was a stupid NYU freshman. I went to classes and tried not to think too much about him. I focused on Arthur Miller, but James was the only thing alive in me. All I had to hold onto was a crinkly-eyed smile, because we hadn’t really talked much. I tried to warm myself from the impression that was still inside me, to make his face visible in my mind, the version of it that looked right at me and was conscious of me, and maybe if I made it clear enough in my mind it would send out energy to him and he would know I was thinking about him.”

“Windsor Girl” also offers Franco the Writer the unique opportunity to make love to Franco the Actor on the printed page—and of that the less said the better.

James Franco the Writer and James Franco the Character, to say nothing of James Franco the Actor, all fare much better in the aforementioned “The Spider-Man Journals,” in which yet another young actress (who has managed to secure a small role in a movie by having an affair with a much older producer) is given a trailer that Franco used during the filming of one of the Spider-Man movies.

In it, she finds a journal that Franco had created during the filming and accidentally left behind. The journal (“The individual letters were barbed and broken, and the lines were irregularly slanted and often obscured by the aggressive scribbles that shot across the page in great jagged arcs that spun into intense vortices.”) touches off a power struggle between the producer and actress and triggers an obsessive dive for one of them.

In this tale, Franco reveals a wit not present in his other stories (Franco the Character’s email address: moc.theactor@rotcaeht.com), and a willingness, just this once, to create an actual story arc. It is, in this collection of bits and bobs, as close to polished fiction as we get.

It’s not as if Mr. Franco does not have the talent to be a novelist. Rather, it seems he is lacking in the willingness to actually do the work. He tosses up ideas, fools around with the concept of Actors Anonymous as a means of connecting disparate characters—some actors, others not—and then abandons his characters as quickly and cavalierly as Franco the Actor seems to dump college freshmen after taking their virginity. In the end, nothing is fulfilled, nothing is developed.

Had Mr. Franco truly sought to make an artistic experiment of this piece, he might have considered sending out Actors Anonymous just as it was written, but under a pen name, to any number of agents and/or publishers. It would have been interesting to discover, when lacking the star-wattage of the Franco name, what might have been the result.