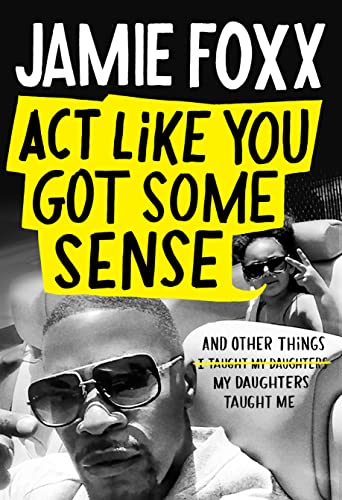 “The first thing I learned about parenting is that kids ain’t goin’ nowhere.”

Actor and comedian Jamie Foxx, born Eric Marlon Bishop, became a first-time parent at a young age of 26. Now that his eldest of two daughters (Corinne, who provided an insightful Foreword) is 27, he sagely offered, “The first thing I learned about parenting is that kids ain’t goin’ nowhere.”

Raised in Terrell, Texas, by his cussing, churchgoing, gun-toting grandmother, Estelle Talley, he was disciplined to listen and take his piano lessons. “Basically, Granny was a badass bitch.” But the “old-fashioned Southern whupping . . . back when getting your fanny blasted was still acceptable,” was allocated to his grandad.

He won a classical piano scholarship to the United States International University, but comedy clubs in the L.A. area became his calling and education, while working days at the Thom McAn shoe store and observing eccentrics at Venice Beach.

Granny passed away just four months before Foxx won an Oscar in 2004 for Ray, though she knew he was destined for greatness.

Foxx laments that he didn’t have much of a relationship with his biological parents. His father, who became a Muslim when Foxx was born, shocked Foxx’s grandmother into adopting him when Dad wanted him to fast for Ramadan when he was just seven months old. And there’s constant referral throughout the memoir about his lament regarding his biological mom, Louise, who rarely visited. “[M]aybe subconsciously I thought I could impress her enough . . . to stay.”

Foxx was grateful when his mom and stepdad eventually came to live with him after he had reached success.

Foxx was with Connie, who became pregnant with his first daughter, Corinne, when Fox was 26 and Connie was 24. They did not marry. Like many dads with teenagers, he was having difficulties with Corinne and therapy was suggested. He first quipped, “#BlackPeopleDontGoToTherapy” but happily relented.

He often found that his busy schedule caused him to overcompensate with indulgences when he did spend time with Corinne when she was younger. But Corinne wanted none of the opulence. On the other hand, his second daughter, Anelise, 14 years younger than Corinne, was all about the Rolls Royce.

Foxx compared raising his two daughters, where he wouldn’t raise a hand to them lest Child Protective Services would be called, to how his grandfather would liberally dispense the belt, at the slightest infraction.

Or like the time his granny went after one of Foxx’s friends with a gun. But then he thought back to his (lack of) sex education in Texas when granny embarrassed him by saying she’d never heard of girls who “put the peepee in their mouth.” He wants to be open with his own daughters and calls himself “The New Dad.”

His grandparents insisted on piano lessons. Soon he evolved from playing church music on piano, incorporating stand-up comedy, to being a full-blown performer with confidence. “Music is in my heart, but stand-up is in my blood.”

When eldest daughter, Corinne, succeeding at performing, “It felt like a passing of the baton . . . that Estelle Talley [his granny] had somehow created.”

And Foxx taught young Anelise how to write songs and play piano.

All along, he’s been nurturing both daughters’ talents. As he says, “Damn, I did a few things right.”

Expect full comic delivery throughout the book, and frequent boasting of Foxx’s winning an Oscar. Also, quick scenes that jump from Foxx’s youth, paralleling with raising his daughters and how they intertwined. After a while the jumping back and forth becomes tiresome—chronological events are often more easily followed.

Act Like You Got Some Sense: And Other Things My Daughters Taught Me by Jamie Foxx is an excellent, tell-it-like-it-is, no holds barred memoir and modern-day parenting guide, but more accurately, it’s a loving tribute to his two cherished daughters.