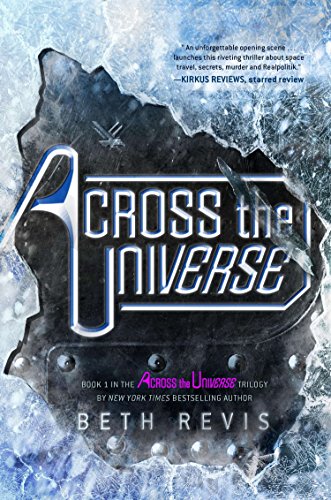 Across the Universe is a debut young adult novel. The story is set aboard the spaceship Godspeed, bound for a new planet, 250 years in the future.

Amy, age 17, is part of a cryogenically frozen group of passengers laying in their icy beds, awaiting their chance to come forth in the new world. Amy makes the fateful decision to join her parents on this adventure and they are all scheduled to awake in 300 years. There’s just one problem: Amy has been awakened 50 years too early. And it looks like it’s the work of a murderer.

Amy awakes to find a new society enclosed in a vast metal container, a world of technological advances, one in which she is the outsider—and the threat. But Amy knows the real threat lies outside of herself. There’s Eldest, the tyrannical leader who has an iron grasp on his people and then there’s Elder, his teen protégé. Elder has always done as he was told; that is, until Amy makes her appearance and things began to change at breakneck speed. A murderer is on the loose. If whoever it is isn’t stopped, Amy’s parents could be the next victims. It’ll only take one pull of the plug on their frozen coffins to keep them sleeping forever.

Amy’s chance to stop this lies with Elder, but who is he really and can he and anyone on this ship of apparent madness be trusted?

This story is rather unique in the crowded young adult field. It uses science fiction as a backdrop, but not in a hardcore or dry way. The description of the technology and the setting doesn’t overshadow the story or the character development. The story is told from the alternating points of view of Amy and Elder. The author plunges the reader right into the action of the story—no info dumps here. Admittedly, this reader was a tad confused when Elder was first introduced. The plunge right into the action without context required careful attention, but it became all too clear how it tied into the story at large as the tale unfolded.

Across the Universe is a well-balanced mixture of adventure, mystery and romance. The world building is excellent. Revis has fleshed out the environment of Godspeed and the interactions of its inhabitants to a degree that enables one to visualize it easily. You are there. The tension only gets greater with every turn of the page and this story has the reader turning the pages quickly. One will be searching for clues and trying to figure out the answers to the mystery of the killer and his or her intent. There are some surprises at the conclusion on more than one front. Good luck trying to figure it out!

There are subtle messages meandering under the surface of this story: differences among people—how much do they matter, how easily people can or can’t accept change, coming to terms with decisions made, the consequences and life’s priorities.

Across the Universe ends with important questions answered, but there are plenty of places for this story to go and a lot still to be discovered. The next installment in this saga is eagerly awaited.