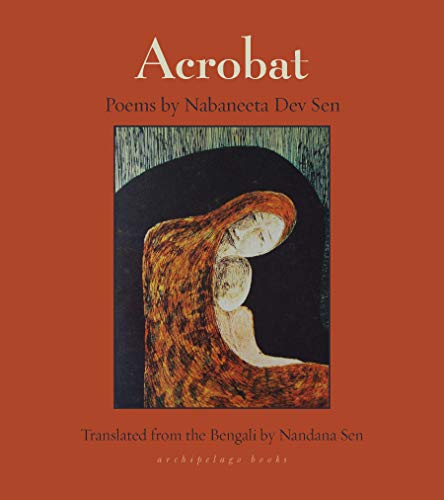 “Nabaneeta’s poetry is a precious addition to international literature.”

Nabaneeta Dev Sen (1938–2019) is a bilingual poet who wrote poems in English and Bangla, a language of over 200 million people, mostly living in India and Bangladesh. Acrobat is a collection of poems, some originally written in English; some that the author first wrote in Bangla and translated into English; some that Nandana Dev Sen, the poet’s daughter, translated from Bangla into English.

The translator has done a superb job retaining the flavor of the translated poems matching those that the author herself wrote and translated into English. Only the readers having access to original Bangla poems can tell whether the author’s poetry in Bangla carries a different personality than the poems in Acrobat.

During the Muslim rule in India, stretching over several centuries, Bangla received an infusion of Arabic and Persian literary forms, though not as profoundly as did Urdu in the Western regions of South Asia. The poetic forms of ghazal (a set of love couplets), nazm (a thematic poem in rhymed or free verse), and rubaii (quatrain) are commonplace in South Asian poetry. The tripadi (three-line verse) is a native Indian aphoristic form that the poets use to capture the pearls of humor, sarcasm, and wisdom.

Missing the beloved is part of the melancholy poetry. “Without you, on this day of rain/All feels empty, and in vain.” “Now I am buried/in a heap of dry leaves, invisible// Where did you go?” “I grow impatient as I wait, /but I hear no one answer the call.” “The house has become the color of pain, /I can’t return to that house again.”

Complaining about and pleading to the beloved are also the classical elements of melancholy poetry. “Did I ask for too much, then? /I wanted just two eyes, nothing more.” Romance with the eyes is ubiquitous in all parts of South Asian love sensibilities. “Now that you have come, don’t leave, / I beg you . . . Stay with me to watch the last act.” There is no shame, no ego, not even for feminist poets, in begging the beloved to stay.

Sometimes, the melancholy poetry, frustrated with the beloved’s callousness, sees lies in love. Nabaneeta, following this poetic tradition, presents the truth of life as “piecing together/many small lies.” The love-bird “recites its practiced lines, uttering/ every pleasing word . . . Saying just what I want to hear . . . But behind my back . . . it cackles with laughter.” Mirror, flower, desire, they smile, weep, and lie when “I asked them, / whose are you?”

Poetry tends to be autobiographical, more so when the poet suffers emotional setbacks and is open to sharing the wounds. Married to Amartya Sen for nearly 18 years (1958–1976), a world-famous economist who would later receive a Nobel Prize, Nabaneeta lived in Britain and the United States, teaching creative writing at various US colleges and universities.

In 1976, the high-powered couple divorced, unleashing a scandal in Kolkata literary circles. Instead of seeking foreign hideouts, Nabaneeta, a quintessential Bengali woman, moved back home and never married again (Amartya did two more times). “Receive me then, Kolkata, /I am your true love, your whole world.”

In the poets’ life, the will to write poetry transcends adversity that only enriches the lines. “Pretending/as if nothing has happened, /picking up the heart/from the sand, dusting it clean/pushing it back inside my blouse/secretly, the year’s first poem gets written.” The translator tells the readers: “Nabaneeta had always believed that her poems . . . understood what she was going through.”

Back home, Nabaneeta felt liberated to explore her existential anguish in her first language, Bangla. “Honestly, I’m fine. /If my eyes don’t look the way they should, /it’s only the light.” A research scholar of epic poetry, Nabaneeta knew the emotions, the art form, and the audience. The time was ripe to write intimate poetry, close to the soul, in Bangla. The questioning is terse: “Make up your mind/ Who do you want/That woman, or me? / Within me breathe/ Two people—”

Acrobat contains poems of what might be called family poetry, written for children, mothers, family friends. Rambunctious “children/whirling like tops in my brain/leaping clapping shrieking creaking/upon the rusty springs of my nerve-ends.” Every parent’s nightmare that the child might die turns into metaphysical certainty in Nabaneeta’s poem: “One day this child too will die.”

Just like the child, the mother has a special place in Nabaneeta’s poetry. When all else fails, the mother is there to go to: “my exile is over, mother, / no more living in the jungle for me.” The dread of the mother dying intensifies as “I hear her speaking softly to the nurse. . . give me one more word, dear nurse, just one more day.”

Nabaneeta stood up for women’s rights and understood their predicament and marginalization in romance and literature. In matters of romance, “Your love is detached, afar, chaste to its core, / My love is, in part love—and, in part, war.” In literature, Nabaneeta, as a scholar, pioneered the feminist study of the Ramayana as women poets from the 16th century to the present understood it. The epic poetry from the viewpoint of women is also both love and war.

The Acrobat poems are subdued in matters of feminism. There is no male-bashing, no gender generalizations, no rage, no connotations that sex is slavery, or that marriage is ritualized prostitution. Nabaneeta’s Bangla feminism is not about downgrading men but about upgrading women. It is nonetheless forceful. “Because I keep crashing/into walls, I have now/come to know them all . . . an open door . . . it’s just another wall.”