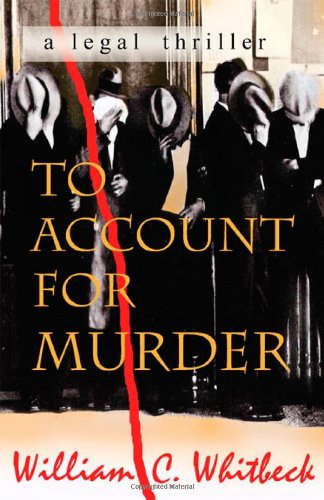 “Everybody lies,” insists protagonist Charlie Cahill at the outset of William C. Whitbeck’s To Account for Murder.

As it turns out, Charlie has an excellent reason to think the worst when it comes to humanity’s potential for honesty: Early in the narrative, we learn not only that he recently shot a state senator, but also that he’s been assigned to investigate the senator’s death.

What follows is a tense thriller whose stakes rise exponentially as Charlie attempts to cover his own tracks while building a plausible case against a cabal of shady figures whose ties to the senator threaten to shake the world of Michigan politics to its foundations.

From beginning to end, the tension in Whitbeck’s literary debut is palpable. In addition to having lost his arm to German machine-gun fire at the height of the Second World War, Charlie is haunted by vivid, inescapable memories of battle that overtake him without reason or warning. As if undiagnosed Post Traumatic Stress Disorder weren’t enough, Charlie must also deal with a deadbeat brother whose dalliances with organized crime place him squarely in the center of the murder investigation, and Charlie’s romantic interest in the late senator’s wife can only complicate his efforts at avoiding capture.

That Charlie’s life is such a complicated mess gives To Account for Murder a distinctly noir-ish vibe, yet the author’s attention to historical detail allows the novel to transcend genre. Indeed, Whitbeck’s depiction of post-war Michigan brings the bygone age to life so vividly as to border on documentary or narrative nonfiction, and the fact that hat he performs this trick without schmaltz or sentimentality is a testament to Whitbeck’s respect for his material. His post-war America is no golden age, his politicians and law-enforcement agents no saints. Rather, the denizens of Whitbeck’s Michigan are as corrupt as they are heroic, which is also to say that they’re as deliciously complex as any figures in history.

To put it another way, Whitbeck reveals throughout the novel that postwar America was anything but the stereotypical “simpler time” in our nation’s history that lesser works would make it out to be. To some extent, this may also be the ultimate point of the book, for as the protagonist relates the details of his narrative (and as those details continue to twist and turn and fold in on each other), we see, above all, that the past is anything but simple—regardless of how idyllic or idealized we’d like it to be.

To Account for Murder demands our attention as much as any great work of literature. It offers a complicated, compelling, and honest vision of the past while maintaining a tight pace and proffering memorable characters. Equal parts thriller and historical novel, it’s a page-turner with an eye for the nuances of all that makes us human. In other words, it’s a stunning debut.