The Accidental President: Harry S. Truman and the Four Months That Changed the World 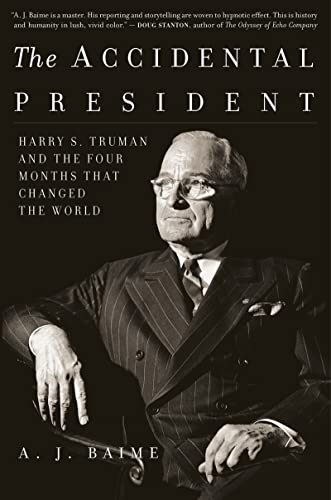 "Baime wrote The Accidental President almost as if a witness to those momentous times. He makes no excuses for Truman but instead argues for how fortunate for the county to have had such a practical, hardworking leader of integrity."

Harry S. Truman "left such a polarizing legacy" that "historians have ranked him among the greatest and the worst chief executives." His problems began with living "in an age when Victorian values and class structure" and having as a predecessor the "first to be widely considered one of the all-time great American presidents," the four-term president Franklin Delano Roosevelt.

In The Accidental President, A. J. Baime offers "not a full-length biography of Truman" (the author does include much about Truman's life in politics) but the story of the last months of World War II that coincided with the first months of the presidency of Harry S. Truman. The author argues that those days "seem particularly relevant given the global political picture today and all the debate about what the American presidency has or should become."

Contrary to legend, Truman did not enter the White House as the least experienced president ever. A candidate for public office six times before 1945, he had won five elections and became Vice President during his second term as an exceptionally hard working and capable United States senator.

Truman consequently became a national figure. More importantly, he had also acquired an "intimate knowledge of the home front, how the United States had become a boiling industrial machine." His committee had looked at aircraft, oil, rubber etc. shortages but also minority and women workers.

Even Truman, however, "was mystified by his rise to number two [vice president] in Roosevelt's administration" but especially as FDR surely had only a short time to live. Only Truman's "most inner circle knew that Truman suffered acute anxiety" on taking the job.

Truman "had failed to crack the inner circle of Roosevelt's advisors and in fact knew almost nothing about what was going on in the Oval Office." He did not have the historical hindsight to know that many of the men who had served Roosevelt, particularly in the military, had failed the president and the country.

"Nearing the end of his first week in office," the new president "inadvertently became the world's most fascinating man." With the war over, a lot needed doing. He faced conflict with the Soviet Union over Poland and Eastern Europe; diplomatic crises from Argentina to Austria; ending the war in Europe; Lend Lease; China; secret agreements; the atomic bomb (that Truman only learned of on his first day as president); the media; defeating Japan; creating the United Nations; transitioning from the wartime economy, forming his own cabinet and staff; and more.

Baime wrote The Accidental President almost as if a witness to those momentous times. He makes no excuses for Truman but instead argues for how fortunate for the county to have had such a practical, hardworking leader of integrity.

This author peppers his lively straightforward narrative with relevant quotes. The book includes appropriate illustrations and a useful timeline.