Accidental Czar: The Life and Lies of Vladimir Putin 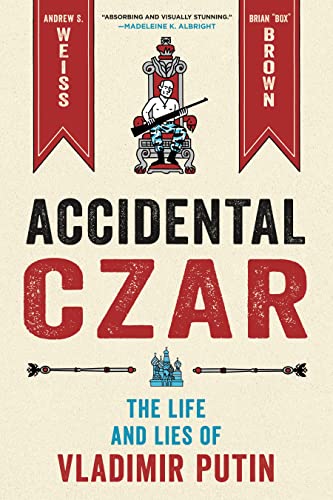 “brilliant. . . . Beyond tracing Putin’s career and delving into his psychology, his beliefs and values, Weiss places his character firmly in context.”

Andrew S. Weiss is an expert on Russia and has worked in White House, the State Department, the Pentagon, as well as at high level think tanks. He brings his 30 years of experience into crafting this brilliant book about the current leader of Russia. He does much more than provide a biography of Putin and an understanding of his origins and context. He lays out as well a capsule history of Russian thinking about power and its place in the world. While the book is clearly motivated by Putin’s recent aggressions in Ukraine, Weiss is just as concerned by all that the recent discussion has missed in looking at Russia:

“The fact that the whims of one man had caused this calamity was lost on no one. But conspicuously missing from the resulting conversation about Putin was much awareness that the West’s problems with Russia go far beyond its leaders uncompromising, hard-edged tactics. To date, there has been far too little discussion of the intense grievances that have piled up on both sides—not to mention the growing risks that these conflicts could potentially spin out of control.”

This book is Weiss’ answer to this disturbing lack. He digs into Putin’s personal history, revealing him to be set on the KGB since ninth grade, when young Putin walked into the agency’s Leningrad headquarters.

“First of all, we don’t take walk-ins. You can only end up here after serving in the army or studying at some kind of college.”

Putin didn’t give up but worked hard to get into Leningrad State University, dreaming of a position with the KGB. He got the much-wanted call in his senior year and joined the agency. Instead of the exciting foreign postings he’d imagined, he spent the next decade in low-level bureaucratic jobs. But he was still part of the vaunted KGB and that was all that really mattered. From such lowly beginnings, he scrabbled up the ladder, intent on more power. His persistence and focus paid off. More than that, he personified the way the system worked, understanding that “what we think of as corruption is actually the glue that holds everything together . . . and makes the system surprisingly resilient.”

These instincts served Putin well. “At the FSB he had gone from being someone who barely made it to lieutenant colonel . . . to being the boss of the entire agency.”

Beyond tracing Putin’s career and delving into his psychology, his beliefs and values, Weiss places his character firmly in context. Drawing on his knowledge of Russian and Soviet history, Weiss makes this book much bigger than the portrait of one man—it’s a portrait of a complicated country.

“I, for one, did not appreciate nearly enough at the time [the 1990s] just how much Putin’s belief system was deeply rooted in Russian history and political culture. For Soviet and czarist leaders alike, a strong, centralized state was essential for overseeing a vast, multiethnic society. And for providing the strongest protection against hostile forces.”

The illustrator, Brown, makes clear the meaning behind Weiss’s words by providing portraits of Russian leaders from Lenin to Putin as a backdrop to the words above. There is, both author and illustrator are saying, a direct link.

This is just one example of how beautifully the graphic format works in what would have been a very complicated text by itself. Rather than writing a traditional book that would be read by policy wonks and historians, Weiss has done something ingenious. He’s turned his personal experience and breadth of knowledge into a graphic novel, making his insights and information broadly accessible to all. One might think a graphic novel about Russian political history and their current exponent, Putin, would be an odd choice of format. But just the opposite is true. By using the wide range of visual information graphic novels can provide, from maps to charts to expressive scenes, Weiss and Brown have created a story that is both narratively and visually compelling as well as deeply informative. Reading this book, one wishes that all history were taught this way. Readers would certainly be better educated if it were.