The Accidental Creative: How to Be Brilliant at a Moment's Notice 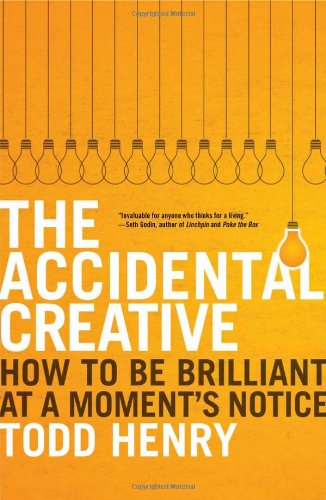 “The Accidental Creative is full of interesting quotes, scenarios, and observations on both productivity and the creative process.”

A key tenet of Todd Henry’s new book, The Accidental Creative: How to Be Brilliant at a Moment’s Notice, is that, regardless of whether or not you work in a specifically creative field—such as design or marketing—you are required to be creative on a daily basis.

While this may sound obvious to some, it’s not readily apparent to all. In many ways, the sum of Mr. Henry’s book works to prove that point—and he accomplishes that goal well.

Mr. Henry opens with what he terms The Challenges, which are the demands of the creative process and the obstacles that hold back the creative process. One such demand is the demand itself: We are required to be creative at a moment’s notice. But the accompanying challenges to creativity, such as boredom and predictability, make being creative on demand less and less likely as we ossify in our daily routines.

The remaining two-thirds of the book shifts from a macro view to a micro view as Mr. Henry identifies means to counter the problems posed in The Challenges to bring about maximum creativity; the author classifies these chapters as The Practices.

Some of Mr. Henry’s suggestions are fairly general, such as when he notes that “[i]n order to do our best work, we need to learn and pay attention to what’s in front of us and to develop the capacity to stay focused on our objective.”

Others are very concrete, such as his Big 3 solution to help in honing good objectives. The Big 3 refer to the act of identifying the major projects in one’s life—whether work or of a personal nature—and narrowing down the list to the three most pressing, weightiest projects at any given time. The author notes that he keeps this list on him as well as visible on his whiteboard “as a reminder of the projects that are still missing a creative breakthrough.” It is a way for him to keep in constant contact with what he deems to be the most important matters requiring his utmost attention.

It is with these pragmatic suggestions that the book really proves its worth.

As a read, The Accidental Creative is full of interesting quotes, scenarios, and observations on both productivity and the creative process. Consider the author’s astute observation that “[n]o matter what you say about your priorities, where you spend money and your time will prove them out . . . if you want to know what’s really important to you, take a look at your bank statements and your calendar.”

If there is one gripe about the book, it’s the somewhat annoying tendency for the author to repeat himself with a bolded sentence after he has just made a compelling point, or vice versa. For example, he will, and did, break out the key point of the previous statement exactly one sentence later.

“No matter what you say about your priorities, where you spend money and your time will prove them out.”

This has the sum effect of detracting from the readability of The Accidental Creative, and this reviewer has the sinking suspicion that Mr. Henry doesn’t trust his reader to get it the first time around.

That minor quibble aside, this is Todd Henry’s first book—and a fine one at that. His suggestion that anyone is capable of breakthrough creativity—regardless of occupation—is a suggestion that, with the plethora of inexpensive and powerful tools available, seems true more today than ever before.