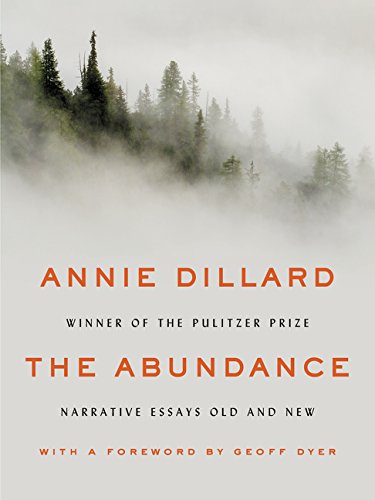 There was a time, and it was not so very long ago, when because we had read the texts of modern philosophy that had suddenly appeared in print, we contemplated Buddhism while we tuned the engines of our Harleys. A time in which we wanted nothing more than to tip our wide felt hats to Thoreau and like him, go and explore life inordinately close to some slight body of still water, a lake, a pond.

This second mode of philosophical exploration was more or less foisted upon the youth of America by a very young essayist named Annie Dillard, who, in words that echo down the decades from the old millennium to the new, wrote:

“I live by a creek, Tinker Creek, in a valley in Virginia’s Blue Ridge. It’s where I make myself scarce. An anchorite’s hermitage is called an anchor-hold; some anchor-holds were simple sheds clamped to the side of a church like a barnacle to a rock. I think of this house clamped to the side of Tinker Creek as an anchor-hold. It holds me at anchor to the rock bottom of the creek itself and it keeps me steadied in the current, as a sea anchor does, facing the stream of light pouring down. It’s a good place to live; there’s a lot to think about.”

Dillard’s first book, Pilgrim at Tinker Creek, gave a whole generation a lot to think about. Most especially in the chapter, On Foot in Virginia’s Roanoke Valley, from which the quotation is taken, which has just now been reprinted as part of a celebration of Annie Dillard’s essays under the group title The Abundance.

Modern pilgrims (the philosophical and/or spiritual type, and not the starched-collared), make themselves scarce by pulling their shell-shaped tiny houses behind large pick-ups and setting up their solar arrays and satellite dishes, but the idea’s the same. There’s power out there in all that silence, in all that sunshine, and the sounds of wolves in the night recall in us something that’s otherwise gone missing. There’s God out there, if you’re looking for Him.

Spoiler Alert: She finds Him.

On foot, she discovers what there is to discover: the beauty of the world, of the simple field, surrounded by barbed wire and containing a small herd of complacent steers, that she must pass through to get to the water’s edge. Also nature’s violence, exemplified by a greedy frog, whose mouth is so crammed with his dinner of captured insects that he cannot swallow. There are many questions, few answers.

As this: If life may be reduced to being a process by which we elude our predators sufficiently well to get through the day and, at the same time, prey upon enough others to, during that day, have enough to eat, then, what the hell?

Or as the author puts it:

“Every live thing is a survivor on a kind of extended emergency bivouac. But at the same time we are also created. In the Qur’an, Allah asks, ‘The heaven and the earth and all the in between, thinkest thou I made them in jest?’ A good question. What do we think of the created universe, spanning an unthinkable void with an unthinkable profusion of forms? And what do we think of nothingness, those sickening reaches of time in either direction?”

And while the reappearance of “On Foot” comes at the reader with the emotional punch of recognizing an old friend after many years of absence, of void, only to notice that they have the same sweet smile that they had way back in that wistful time called “youth,” there are other, perhaps even better things to discover in The Abundance.

Think of it as a best-of album by some singer-songwriter of long-ago whose lyrics you loved, so that the rehearing of them alludes to so many times past—parties, dinners by candlelight, soggy, sad nights, cold nights, and warm, sweaty nights in which insect calls vied with the scratch of the needle on the turn-tabled vinyl as the sunset turned to night.

The best of those best-ofs became not just a secondary revenue source, a higgle-piggle assortment of artistic detritus, but also something more. They achieved a dynamic of their own.

So it is here in The Abundance.

While all the essays appearing here have come from other sources—Dillard’s essay collections, Pilgrim and The Writing Life among them, and her memoir An American Childhood, as well as from her pool of journalistic pieces—the assemblage gathered under the new title stand firm together as witness to both the dipsy doodle nature of Dillard’s essays and the intense poetry of her writings.

As here, in the essay “Total Eclipse:”

“I turned back to the sun. It was going. The sun was going, and the world was wrong. The grasses were wrong; and the world was wrong. The grasses were wrong; they were now platinum. Their every detail of stem, head, and blade shone lightless and artificially distinct as an art photographer’s platinum print. This color has never been seen on earth. The hues were metallic; their finish was matte. The hillside was a nineteenth-century tinted photograph from which the tints had faded. All the people you see in the photograph, distinct and detailed as their faces look, are now dead. The sky was navy blue. My hands were silver.”

She has an ear for the good quote as well, as exemplified by the Disneyland chapter taken from her Encounters with Chinese Writers.

It begins, “It is a sunny September morning in Disneyland. Band are playing; people walk with their children and take pictures.”

Somewhat bizarrely, Dillard accompanies a group of Chinese writers, who have travelled to Los Angeles for a writers’ conference, and who have decided to visit Disneyland before returning home. Which is not all that bizarre, but the fact that no less than Allen Ginsberg is acting as American co-host to the group certainly is.

As usual, the essay consists of moments that are taken out of context and examined. Moments that get strung together, like pearls.

“We all come around a corner and a band is playing. We are alone on a broad intersection under blue eucalyptus trees that cast pale and wobbling lines of shadow on the street. Two of us Americans begin to dance.

“One of the Chinese men, with debonair smoothness, as if this were what one did every lunch hour on the streets of Beijing, lightly taps one of the women, and they dance. The band is playing Duke Ellington—‘Mood Indigo.’ They dance lightly, formally, grandly, seriously, until the song is over; we all continue on, without comment.”

The good quote comes later on, when the group begins to explore some of the adventures the park has to offer:

“Feng Mu and some others try the wildest ride at Disneyland: ‘Space Mountain.’ It is like a roller coaster, only its cars, instead of dropping, jerk and veer through hairpin turns in the dark. When it is all over, Feng Mu and the others climb from their cars breathless, and compose themselves on terra firma. Feng Mu past a hand over his hair and restores it to order. He stands absolutely straight and tilted backwards; his legs are formally together; his expression is at once serene and exalted. ‘I think,’ he says serenely, as if addressing the press, ‘that unless one has ridden ‘Space Mountain,’ one cannot truly claim to have been to Disneyland.’”

No other writer has Annie Dillard’s cadence, her insights, or her willingness to make such a mish-mash of those insights. She puts the “idio” in idiosyncratic.

In her essay “A Writer in the World” she advises:

“Write about winter in the summer. Describe Norway as Ibsen did, from a desk in Italy; describe Dublin as James Joyce did, from a desk in Paris. Willa Cather wrote her prairie novels in New York City; Mark Twain wrote Huckleberry Finn in Hartford, Connecticut. Recently, scholars learned that Walt Whitman rarely left his room.”

Which makes us worry about Tinker Creek.

And most certainly no other author illustrates her About the Author page with not one but two author’s photos. A before and after, the one of the hippie girl whose chin rests on the left hand that juts out of her puffy-sleeved pirate shirt, the other an admittedly older woman whose face is lit by a glorious, toothy smile.

As if she worried that we might have forgotten. And so the picture of the younger self, as if to say, it’s me, remember, from way back in 1974 . . .

As if we could possibly forget.

The Abundance is a wonderful thing. Most certainly it is a great jumping-on point for readers new to Dillard’s works. But more important, it is a kaleidoscope filled with the most striking and wonderful shards of Annie Dillard’s lifetime of work. It’s a lovely volume well worth owning.

Consumer note: those who take the book’s subtitle seriously (Narrative Essays Old and New) may be upset when they realize that, as far as this reader can see, there are no new essays in the volume. Some fairly recent ones, but none that could be considered “new.”