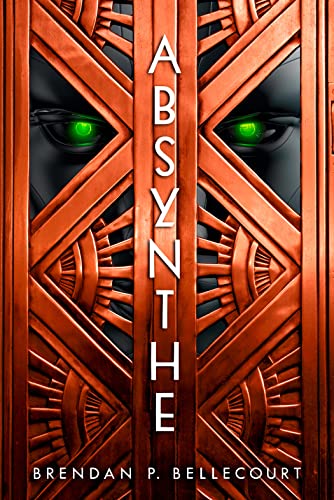 “Absynthe is a solidly imagined period piece with a lot of surprises and a unique style.”

Absynthe is a book about illusion. The plot revolves around the ability of some characters to cast complex illusions that hide the true nature of themselves or the world around them. Bullets miss because their intended victim isn’t standing where he seems to be. Secret doors and staircases evade the casual eye. Giant floating cities are rendered invisible.

The main character, Liam Mulcaney, lost his memory due to a head injury in the Great War. He knows his past holds the key to defeating an evil conspiracy, but he doesn’t remember any of the events or people involved. Through most of the book, Liam fights to remember his past and to pierce the veil of illusions. Through many flashbacks, he gradually pieces together the truth.

Unfortunately, the combination of amnesia and illusion makes it hard to relate to the characters or the plot. Characters turn out to be imaginary, or to have always been someone else, making it hard to connect to them as people. The motivation of the main antagonist is a mystery until the very end, making him appear for much of the book to be a mustache-twirling villain pursuing a plan to enslave all of humanity for no reason except that it’s evil.

Liam himself is more relatable as a war survivor with past trauma, trying to make sense of a world where nothing is as it seems. He remains the same kind, noble person throughout the book, however, without much personal growth or change beyond the slow return of his memories.

Absynthe shines most of all in its setting: a gorgeously realized Roaring 20s backdrop jazzed up with some futuristic glitz as it might have been imagined at the time. The characters speak with period-appropriate language. Even the metaphors feel period-appropriate, such as “flashed like images in a spinning zoetrope” and “burst from it like Athena from the head of Zeus.”

More significantly, the characters think with a 1920s mindset. Unlike many historical fantasies that cram modern sensibilities where they don’t belong, the characters’ perspectives on life, love, war, government, duty, and responsibility fit the time period.

All together, Absynthe is a solidly imagined period piece with a lot of surprises and a unique style. The theme of illusion makes the characters hard to get to know, but also creates an unexpected world where nothing is as it seems.