Above the Reich: Deadly Dogfights, Blistering Bombing Raids, and Other War Stories from the Greatest American Air Heroes of World War II, in Their Own Words 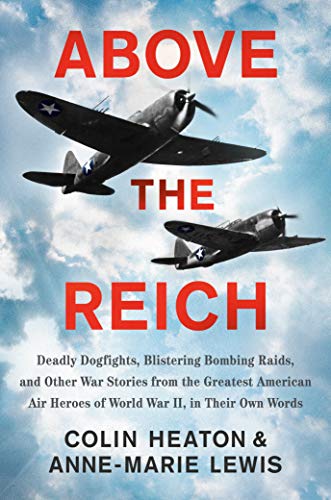 The subtitle for this book says it all: Deadly Dogfights, Blistering Bombing Raids, and Other War Stories from the Great American Air Heroes of World War II, in Their Own Words.

The key point is: “In their own words.”

Historian Colin Heaton interviewed five prominent players on the aerial side of World War II before they passed on. The interviews occurred between 1986 and 1998, and captured intense, personal accounts of what really happened during not just World War II but also later conflicts of modern times. The emphasis, however, is World War II.

In partnership Anne-Marie Lewis, with whom Heaton has co-authored several important works about the period, he has brought to contemporary readers a fresh understanding of the war that formed the current world order, which so many different parties are still struggling to sustain or to change.

The subjects of this book—Gen. James H. Doolittle, Gen. Curtis E. LeMay, Brig. Gen Robin Olds, Col. Edward R. Haydon, and Col. Robert S. Johnson—have been interviewed and written about before. What Heaton managed to do is, through multiple formal and informal conversations across multiple years, get them to speak forthrightly and in sometimes shocking terms.

These men share certain traits: a bulldog fighting spirit, a belief in leading from the front, an abhorrence of stupidity, cruelty, and waste (and politics), and a determination to get things done. In some cases they knew each other, and/or worked together; in other cases their ages were far enough apart that they only knew of one another. But they all played crucial roles in military aviation.

Through the interviews we learn what it was like to fly pre-jet-age fighters, bombers, and reconnaissance aircraft during combat. Also how difficult it was to get materials, supplies, ordnance, and personnel to all the places they had to be around the globe.

Some of the tales are tragic and sickening. Others are heroic and inspiring. All are eye-openers for anyone who did not experience the war (which is the majority of people these days).

It may surprise readers that these public figures—some of whom achieved high rank and received numerous medals—have trash mouth. That is, they swear a lot. So much so that if you are sensitive about profanity, you will surely be offended and distracted from the important facts and insights the men share. As well, some of them have harsh opinions about both their enemies and their own leadership and express those opinions in ways offensive to many in today’s culture.

BUT: Those sensitive points are crucial to the collection. They demonstrate that the interviews are unexpurgated, and also convey truths of the times. They are the voices of real men who put their lives on the line, voluntarily or involuntarily, on our collective behalf.

In different combinations they fought in or directed the strategic and tactical elements of the war most of us have only read about. Or heard about. Or seen films about. Few of us were taught much about it in school. Yet it forms a huge part of American (and global) heritage that is still unwinding. Most everyone who reads this book will recognize names of important political players of our own era. Be prepared to have some illusions shattered.

Readers with military background in general, and interest in and knowledge of the war in particular, will welcome and applaud this revealing history. Readers encountering information about the war for the first time may have their eyeballs pop out on springs. This book proves that what civilians hear about warfare through mass media often doesn’t match what actually happens, and there’s always a lot going on behind the scenes.

The book is thoroughly researched and properly presented as a historical record, with chapter notes, appendices, acknowledgments, and index. It contains leads to much more information for readers and scholars studying the period.

But there’s nothing stuffily academic about it. The text pulls you along like an action/adventure novel, owing to the vivid voices of these five men and the obstacles they had to overcome. At the same time, it feels like you’re sitting in the same room with them hearing the stories firsthand.

Whether you like them or not as individuals, whether you believe or not in their values, whether you think they made right or wrong choices under horrible pressures, you can’t help but respect them and be glad they were there for us. The world would be a different and probably worse place if they had not.