Above and Beyond: John F. Kennedy and America's Most Dangerous Cold War Spy Mission 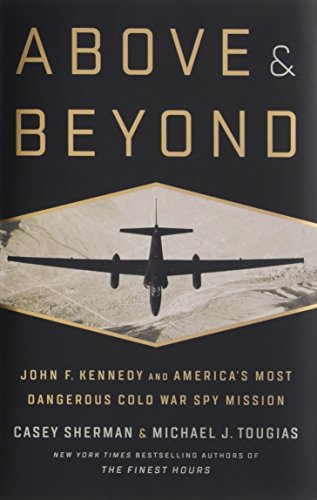 "Above and Beyond, by different roads, arrives at the single greater epic of the U-2 and the Cuban missile crisis that swung from almost guaranteed mutually assured destruction (MAD) to hope for summits for nuclear disarmament."

If the human race has future generations, the Cold War with its nuclear weapons and drama of the individual characters involved will become the Gilgamesh, Iliad, Beowulf, Macbeth etc. of our time. Historian Naill Ferguson calls it the unrecognized World War III leaving a legacy where the world could still lose all life above the level of cockroaches.

Above and Beyond has no introduction or real conclusions. It opens with what you see from the view of the daring pilots described in chapter after chapter. The reader learns more about their backgrounds as individuals than about their war in the skies where pilots on both sides risked deaths kept as state secrets.

Not until chapter six do Sherman and Tougias finally discuss "creating an aerial spying system he [CIA director Allen Dulles] believed was essential to preventing a nuclear showdown with Russia." Even then, that history gives way to biographies of Richard Leghorn, Clarence Johnson, Duck Bissell, Tony LeVier, and others as this story only starts to come together.

The reader must put together important conclusions such as Leghorn's strategy to "reach the heights necessary to avoid radar and antiaircraft fire." Such points lay buried in this collection of seemingly related short stories like wreckage of a U-2 spy plane.

As often the case in Washington, achieving the necessary end became lost in a campaign to cover up failure. Hiding those problems led to the downing of Gary Powers, the subject of numerous books and the major motion picture Bridge of Spies.

The Central Intelligence Agency and the U. S. Air Force had to make a complicated united effort work. Making such unproven advanced technology work became an adventure of literally flying blind. "To veil the U-2 program in secrecy," the CIA "referred to the plane as 'articles'" and the pilots "were called drivers."

The "’drivers’ were fighter pilots by training, and their aggressive nature made for a difficult transition to flying the defenseless U-2." Almost immediately, the Soviet Union "tracked the spy planes long enough to launch their warplanes" and only initially to no avail.

Pilots "captured in hostile territory might give up operational secrets" and "how could the CIA use American pilots on unlawful missions while maintaining deniability for the White House?" Despite these concerns, the authors show that the U-2 pilots received everything needed to survive a crash behind enemy lines.

The shooting down of Gary Powers gave the Soviet Union undeniable evidence of the spy planes. "Global criticism of the U-2 program spread not through gentle murmur but with a thunderous echo."

The capture of Powers ended a nuclear disarmament summit. Soviet leader Khrushchev subsequently demanded an end to the flights and threatened to lay siege to American occupied Berlin. On the eve of the 1960 election, presidential candidate John F. "Kennedy expressed concern about [President] Eisenhower's handling of the situation."

Sherman and Tougias tell gripping and entertaining stories but only for the shrinking number of people who know of the times. The reader, for example, first meets John F. Kennedy in a seemingly unrelated detailed account of the future president's desperate adventure with ill-fated PT-109 in the World War II South Pacific.

Above and Beyond, by different roads, arrives at the single greater epic of the U-2 and the Cuban missile crisis that swung from almost guaranteed mutually assured destruction (MAD) to hope for summits for nuclear disarmament. This journey merits taking, but here the reader must have patience and trust, while accepting constant distraction.