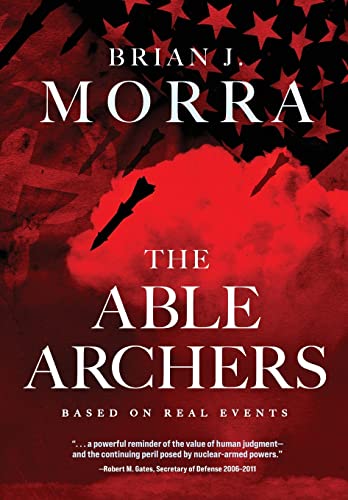 “As compelling as it is informative and as entertaining as it is terrifying, the novel The Able Archers is a great read and highly recommended.”

It must be really hard to write a thriller when the readers know how the story is going to end; nevertheless, Brian Morra does just that in The Able Archers.

The book chronicles a dismaying, but real, sequence of geopolitical events between July and November of 1983: a provocative US Navy training exercise, followed by the downing of Korean Airlines flight KAL007, a Boeing 747 with 269 souls on board, by a Soviet Air Defense Su-15 Fighter; followed by false alarms from a faulty Soviet ICBM launch detection system; finally culminating in a massive NATO wargame that very nearly triggered WWIII. Once more for emphasis, these events really, literally, historically, actually almost triggered WWIII, a global thermonuclear warhead exchange between the US and the USSR, and the resultant smoldering end of the world in November of 1983.

Only the end of the world didn’t happen. It’s still here, and that’s the appeal and the underlying strength of this book as it leads the reader on a fictional journey through the historical facts to reveal not only how, but why the world didn’t end.

While it could properly be considered a military thriller, the book also embraces several literary genres including Cold War thriller, historical fiction, and disaster thriller. A manmade disaster in this case, one narrowly averted thanks to the characters (some real, some fictional) who carry the story and propel it so effectively that the reader quickly loses sight of the distinction between the real and the fictional as they merge into a cohesive and immersive narrative.

The story alternates between two officers on opposing sides: one, a junior Air Force Intelligence Officer, so young he can’t grow a beard (which yields a laugh out loud moment near the climax of the book that was totally unexpected); the other a senior Soviet Air Defense Forces Intelligence Officer, 20 years older and three ranks above the young American. The book has a strong three act structure that starts with the American, his first special ops experience in Southeast Asia, some intelligence work in Japan, leading up to the KAL007 incident and his pivotal role investigating and ultimately helping the US inch away from the brink to avoid the first of what would become several, historical, real, actual opportunities for WWIII in the summer and fall of 1983.

Act II shifts the focus to the Soviet counterpart who is similarly engaged in investigating the KAL007 incident from the USSR point of view. One of the most effective features of the story is that it is told in the first person, so that the reader is given insight into the Soviet psychological landscape, both for the Soviet protagonist and for Soviet command leadership—it seems that at that point in time the Kremlin was totally convinced that the US and NATO were planning an imminent nuclear first strike attack on the USSR. They even had a name for their response to it, not a fictional name for a fictional program, a real name for a real program, RYaN, an acronym that in Russian stood for “Nuclear Missile Attack.” Their paranoia was confirmed by the penetration of Soviet Air Space by KAL007 (and thus its downing) as simply more evidence of the US intention to attack what President Reagan called the “Evil Empire.”

Act III builds momentum as the focus shifts between the American captain and the Soviet colonel as they scramble to avert the end of the world. To its credit the author builds momentum without car chases, gunfights, or ticking bombs but instead with CRITICOMS, teletypes, briefings (in the days before PowerPoint), Reagan’s white Stetson cowboy hat, and Margaret Thatcher’s summer wardrobe—as one character comments “you can’t make this shit up!” It all really happened.

As compelling as it is informative and as entertaining as it is terrifying, the novel The Able Archers is a great read and highly recommended.