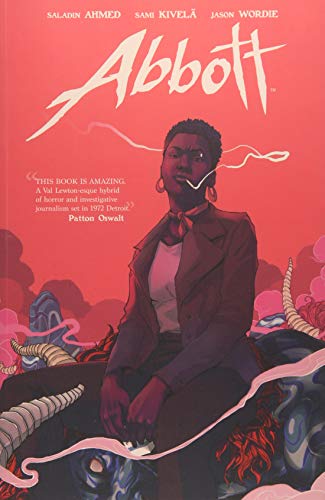 “Abbott is enormously enjoyable. The occult plot is a touch hokey, but Elena makes the journey worthwhile. Her story is one long fight. Racism, the patriarchy, dumb bosses, supernatural forces. She handles it all, cigarette dangling, not a hair out of place.”

In the opening panels of this graphic novel, we're introduced to a heroine so heroic, sassy, and cool she makes J-Lo look like Mickey Mouse. She's a black, bisexual, chain-smoking, brandy-swigging reporter. She has the swagger of a supermodel and she represents pretty much everything good that came out of the sixties: civil rights, women's liberation, and John Coltrane's “A Love Supreme.”

It's Detroit, 1972. Our heroine, Elena Abbott, is called out to investigate a gruesome crime. A police horse has been dismembered. The assembled white male reporters want to blame it on the Black Panthers, but Elena knows it's not Panther style. Soon afterward, it turns out that it isn't just animals getting carved up. People are being bisected, with half their body stolen by the murderer. A grisly experiment is going on, and it's connected to the occult forces that killed Elena's husband years before.

Sure enough, Elena's investigations turn personal. Will she, too, get chopped up? Are her visions of monsters real? Will she drop dead of lung cancer before the next page? And will we ever see a crease in those hot pants she's been wearing since the start?

The story is a combination of noir and horror. It includes the tropes of both: a hard-drinking rebel with a messy personal life battling her bosses as much as the bad guys (and falling asleep to Coltrane in the evenings). As for the horror, let's put it like this: If you're a woman and you break into a locked mansion alone, at night, looking for an evil genius, you really haven't watched enough slasher flicks.

The dialogue is snappy but flawed. Besides all the clichés of the genre, there's a moment when the bad guy starts pointlessly justifying himself, like those Bond villains who can't resist pontificating. While railing against the modern world, he says: "This is a fallen age. Watching television. Eating television dinners. We have lost touch with the primal forces that move the world." It's a rare moment of unintentional comedy.

But the story moves fast and Sami Kivelä's illustrations are as gorgeous and stylish as ever. Period detail abounds: wing collars, lamb-chop sideburns, cigarette smoke everywhere, and Elena—rather charmingly—needing to borrow a cafeteria's dial-up phone.

The illustrations and lettering are formally inventive, too. Scraps of Elena's reporting appear in newsprint in the panels, giving us backstory. And at the beginning of each chapter, full-page maps of Detroit mark the areas of action and prove crucial to solving the mystery. The story also cleverly uses the tools of Elena's trade—a camera and a cigarette lighter—as a plot device.

Abbott is enormously enjoyable. The occult plot is a touch hokey, but Elena makes the journey worthwhile. Her story is one long fight. Racism, the patriarchy, dumb bosses, supernatural forces. She handles it all, cigarette dangling, not a hair out of place.