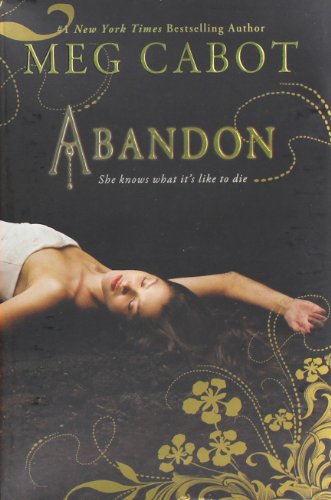 In her latest YA novel, Abandon, Meg Cabot puts a new spin on the Greek myth of Persephone. Persephone is the goddess captured by Hades, god of the Underworld. Ms. Cabot reimagines the tale through the narrative of her 17-year-old protagonist, Pierce.

Pierce suffered a near-death experience when she accidentally drowned. While she appears dead to her loved ones, Pierce finds herself in the realm of the Underworld. As she’s trying to understand where she is and why, she meets the handsome and mysterious John Hayden. He ferrets Pierce away from the two groups of the dead, lined up heading to parts that are unknown, and scary.

When John gets Pierce alone, he tries to make her understand how important it is to remain where she is, but she has other plans and that doesn’t include remaining dead—no way. She manages to get the best of John and return to the land of the living, but it’s not going to be as easy as that.

As Pierce tries to move on in her life and forget the “deadly” part of it, John keeps showing up. And strange, mystical, and dangerous things start to happen. John says he has to protect her. He’s sure he needs to bring her back to the Underworld to do it, but to make sure she remains safe, she’ll have to stay there—permanently.

Arguably the queen of contemporary teen novels, Ms. Cabot is determined to stay relevant and keep up with the trends in teen fiction. Her retelling of this old myth is smart, sassy, and of the moment. Ms. Cabot can clearly handle the supernatural as well as the realistic. She weaved in components of the mythical entities in new and surprising ways. The author is also clearly not averse to tapping into darker elements.

She has a writing style that is sharp and witty. One is drawn right into the story, all the while trying to reconcile how this new take on an ancient myth is going to play out. The author is able to capture a sexy, angst-filled sensibility that is a popular and common thread in much of the recent offerings in young adult fiction.

Abandon ends with a shocking twist, encouraging, even compelling the reader to delve into the next installment to discover how Pierce’s disturbing journey will continue.