The Vineyard at the End of the World: Maverick Winemakers and the Rebirth of Malbe 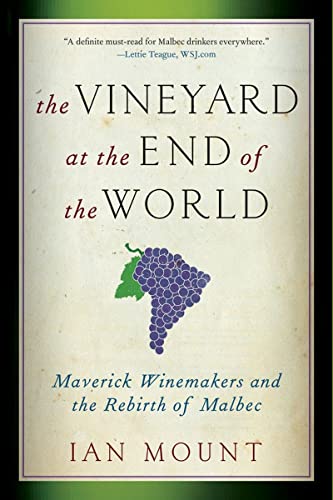 “While not exactly an ‘Introduction to the Wines of Argentina’ book, The Vineyard at the End of the World is nonetheless a good starter book about the wines of Argentina, giving the reader a good historical sense of how her glass of Malbec came to be in her hand.”

No, this is not a story about a post-apocalyptic vineyard. It is the story of grape-growing and wine making in Argentina. Nor is it particularly a story about “maverick” winemakers. It is a story of how Argentinean winemakers, in a country with a tumultuous history, constantly adapted to their circumstances, and took advantage of changes in the wine scene. And the rebirth of the grape Malbec is only part of the story.

Most U.S. wine drinkers have been introduced to wines from Argentina in only the last five to ten years, as imports from there have soared. But beyond the misleading title, Ian Mount introduces us to a country with one of the oldest continuous grape growing and winemaking industries in the Western Hemisphere, but which until recently made oceans of wine that only Argentines would want to drink.

Vineyards came to Argentina, specifically to Argentina’s premier grape-growing region, Mendoza, in 1561, when a conquistador, Pedro Ruiz del Castillo, came over the Andes Mountains from Chile with 47 soldiers, and informed the local Huape Indians that they were now the subjects of the King of Spain. He parceled out land, including land destined for vineyard.

Mr. Mount leads the reader through the next few centuries of the Argentine wine industry, as winemakers made mostly easy-drinking wine, with some special sweet wines, to cater to the national market. The town of Mendoza was destroyed in a horrific earthquake in 1861, but in 1885 a railroad connecting Mendoza to Buenos Aires dramatically lowered the cost of shipping wine, and the industry exploded.

Winemakers became rich making wine for Buenos Aires, but it was inexpensive, mediocre wine that nobody else would drink, being oxidized and watered down. Meanwhile, Argentina went through numerous corrupt governments, with the military overthrowing Juan Peròn’s government in 1955 and instituting a regime that would make many people “disappear” over the next few decades (and especially from 1976 to 1983).

In 1980, the most important wine empire in Argentina was run by Héctor Greco. In 1979, Greco had made a deal to buy the bodega run by Nicolás Catena (the first winemaker name in this story that we were likely to have heard of), for $129 million. Catena craftily drafted the contract so that the company would not be turned over to Greco until he had made the final payment. When Greco was arrested in 1980 by the military regime, his empire disappeared, and Catena was left with around $100 million of payments but still holding the company because the final payment had not been made.

With Nicolás Catena the central figure, we are introduced to many others who helped bring Argentinean wine into the modern era. Paul Hobbs was brought on as an early consultant to Catena, bringing many new techniques and equipment. Michel Rolland, from Bordeaux, first consulted in the very high altitude Salta region, then for the rest of Argentina.

We meet Alfredo Bartholomaus, who was instrumental in bringing Catena’s wines to the United States. If you live in the Washington, DC, area (or beyond), and you have managed to taste Catena’s top-of-the-line wines (costing over $100) without having bought a bottle, it was probably Alfredo who poured your glass.

It was found that Malbec did better in Argentina than it ever did in its native France, and it was found that if yields were constrained and other modern techniques deployed, Argentine Malbec could compete with the best wines in the world, while Argentina’s low land costs allowed winemakers to make great quantities of wine at reasonable prices.

After Argentina’s government stabilized, investors poured in, and vineyard area was greatly increased. Argentina’s wine industry become quite modernized and world competitive. Along with Malbec, Argentina is also becoming known for Torrontés and Bonarda wines. Today, it is hard to remember how recent this was, making California’s modern wine industry seem like veterans.

Ian Mount’s narrative is perhaps somewhat Catena-centric, but, relying on interviews with a large number of sources, he makes an effort to fill out the story to include many other players. Many were generous with their time, and Mr. Mount provides a view of the personalities with a balance that may be missing from many of the “official” histories of the various wineries. He demonstrates a close familiarity with winemaking techniques and is comfortable in explaining the changes made in Argentina to improve the wines.

While not exactly an “Introduction to the Wines of Argentina” book, The Vineyard at the End of the World is nonetheless a good starter book about the wines of Argentina, giving the reader a good historical sense of how her glass of Malbec came to be in her hand.