1917: Lenin, Wilson, and the Birth of the New World Disorder 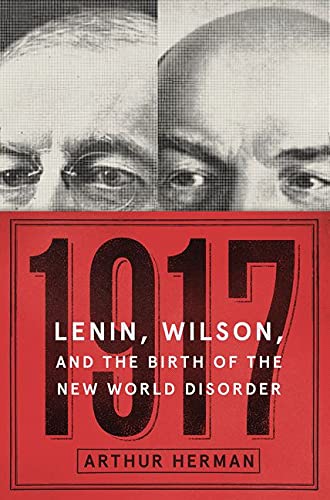 Historians and academics always face the challenge of balancing biography with what T. S. Eliot called “those vast impersonal forces” that hold us in their grip and shape history. Arthur Herman in his new book, 1917: Lenin, Wilson, and the Birth of the New World Disorder, tips the scales toward biography, but does not ignore the “vast impersonal forces” of history.

Herman rightly views 1917 as the year that shaped the rest of the 20th century. The United States massively intervened in a European war, and its President, Woodrow Wilson, attempted to impose a new world order in the wake of the war’s unprecedented carnage.

In Russia, the Romanov dynasty was toppled by revolution and replaced first by a Provisional Government and then by the Bolsheviks in a coup d’etat led by Vladimir Ulyanov, known as Lenin.

In other parts of Europe, forces were set in motion that toppled monarchies and political traditions in Germany, Austria-Hungary, and the Ottoman Empire. In some places, secular, utopian ideas filled a vacuum created by the decline of the traditional religious impulse, and moral relativism raised its ugly head. British historian Paul Johnson described it as “[t]he end of the old order, with an unguided world adrift in a relativistic universe.”

Wilson and Lenin were “dreamers” and “intellectuals” who were “obsessed with their personal mission to change the world,” writes Herman.  Each had a utopian vision for the world, and each single mindedly sought to bring it about.

For Wilson, it was a world of peaceful democracies united in a League of Nations; for Lenin, it was a communist world revolution. Neither leader brooked opposition, but whereas Wilson operated in a constitutional republic that limited his power, Lenin forged a totalitarian dictatorship that allowed him to eliminate his opponents.

Both leaders pursued their utopian dreams in the midst of the First World War, what an earlier generation called the Great War. That war, George F. Kennan later wrote, was the “seminal catastrophe” of the 20th century.

Wilson, as Herman notes, initially sought to keep America out of the war, but events—Germany’s policy of unrestricted submarine warfare and the Zimmerman Telegram, which attempted to lure Mexico to side with Germany against the United States—forced his hand.

The world’s other great powers, however, viewed the war, its immense sacrifices, and the peace that followed in more traditional geopolitical terms. The victors in war were supposed to gain the spoils of war—territory, increased security, economic reparations, and a favorable balance of power.

President Wilson’s vision of the future was contained in the Fourteen Points that, Herman writes, “pointed the way to a new world in which war, injustice, and tyranny would wither away and die.” They included freedom of the seas, free trade among all nations, international arms reduction, an end to colonies, an end to secret diplomacy, the right to self-determination of peoples, and a League of Nations.

Herman calls the Fourteen Points “naïve, pie-in-the-sky idealism,” yet Wilson succeeded in including many of them in the Treaty of Versailles, though in the end he accepted compromises proposed by the Allied governments.

Wilson, however, would not accept compromise at home. Republicans in the U.S. Senate, led by Henry Cabot Lodge, refused to ratify the Treaty without adding amendments or reservations. Wilson would have none of this. He toured the country by train, giving speech after speech denouncing the Treaty opponents, but to no avail.

Wilson’s crusade for America’s participation in the League of Nations failed, according to Herman, because he refused to compromise. Here, Herman parts ways with many historians who cling to the notion that Senate Republicans were largely to blame for the America’s refusal to join the League.

It was an uncompromising, self-righteous, and invalided Wilson who doomed America’s participation in the League. During his whistle-stop crusade, he suffered a series of debilitating strokes that rendered him unable to effectively carry out his duties as president. During this time, his wife Edith acted as president and along with Wilson’s doctors carried out the “most elaborate and successful cover-up in presidential history.”

Lenin’s immediate goal was power in Russia. He accepted the humiliating Brest-Litovsk Treaty, which severed the Baltic States, Poland, and Ukraine from Russia. His hold on power was tenuous. He created the All-Russian Extraordinary Commission for Combatting Counter-terrorism and Sabotage (the Cheka) to eliminate political opposition and terrorize real and perceived enemies.

His most dangerous enemies were the “White” forces, separate armies that waged a ferocious civil war against the Bolsheviks for the next three years. To complicate matters further, Allied armies (American, British, French, Japanese, and Czech) intervened in Russia for varying reasons, but their actions were never coordinated nor did they ever seriously attempt to overthrow Bolshevik rule, as the Soviets later claimed.

The Russian Civil War, Herman notes, further devastated the land and its people. Millions more were dead or wounded. “Social order had broken down throughout the country; famine stared Russia in the face.”

But Leon Trotsky’s Red Army was victorious. The Allied armies left Russia. And Lenin “systematically constructed in all its essentials, the most carefully engineered apparatus of state tyranny the world had ever seen.” “It was Lenin, not Stalin,” writes Herman, “who turned his utopian dream of a new Communist global order into a living nightmare.”

The visions of Wilson and Lenin set in motion events, ideas, ideologies, social forces, and personalities that led to the Second World War and the Cold War.  The great lesson, Herman concludes, is that “utopian dreamers in power tend to breed disaster.”

As we look back on the past hundred years of history, Arthur Herman’s insightful book confirms George Kennan’s observation that all the lines of historical inquiry lead back to the First World War and its immediate aftermath.